Lazar: Ten Things We Learned From the Patriots’ 25-6 Victory Over the Jets 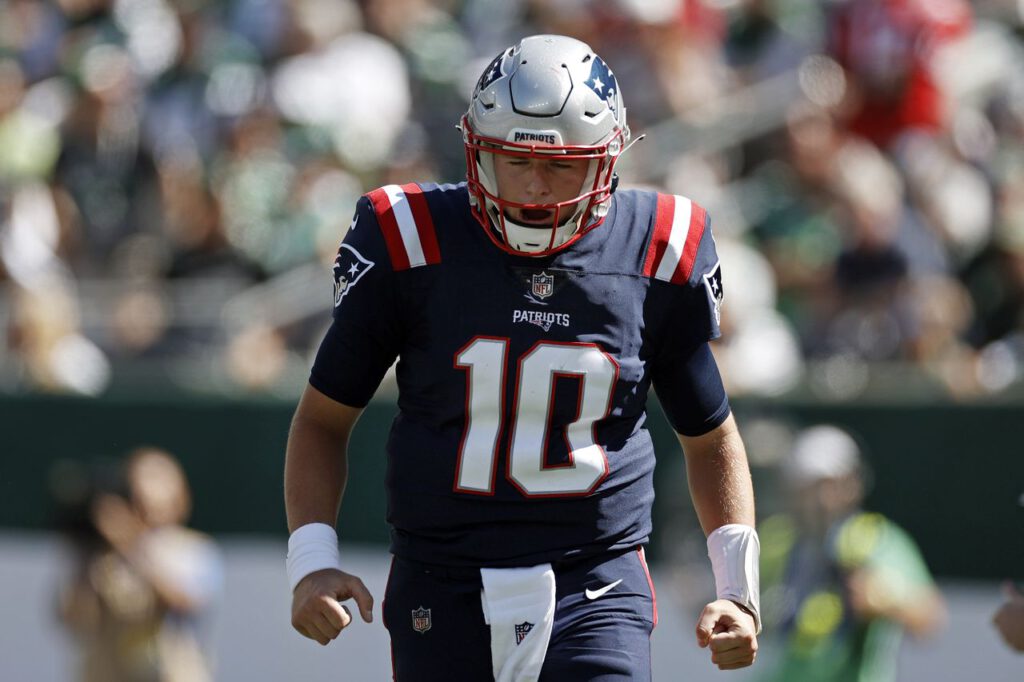 East Rutherford, NJ — The Patriots are in the win column for the first time in the 2021 season with a 25-6 victory over the New York Jets at MetLife Stadium on Sunday.

The inevitable reaction to the Pats’ offensive performance, which was up-and-down and lacked style points in the passing game, is that it’s not good enough yet for Mac Jones and company.

And if this team has playoff aspirations, the offensive line play and downfield passing game aren’t good enough right now.

But let’s keep things in perspective because the Jets and quarterback Zach Wilson showed us how bad things could be with a rookie quarterback in his second career start.

The Patriots are in their second game of the Mac Jones era. A rookie QB, a bunch of new faces at the skill positions, down their starting right tackle, and they were the superior offense in every way. In fact, the opposition just crapped their pants in a similar situation.

Here are ten things we learned from the Patriots’ first victory of the 2021 season:

(As always, h/t to @FTBVids_YT for the clips. Please give him a follow)

After spending all that money in free agency and drafting a first-round quarterback, the lack of explosive plays in the passing game is frustrating.

Rookie QB Mac Jones’s average depth of target was four yards, meaning his average through traveled only four yards in the air, and the Pats are struggling to produce big passing plays.

After the game, Jones took responsibility for the lack of deep shots by telling CLNS Media, “I think it was just me. I can push the ball down the field more. I can definitely hold the ball in a good way. Maybe just move and try to make a better throw downfield.”

Another reason for the lack of downfield throws is that the Pats are struggling in pass protection and were exposed again this week without starting right tackle Trent Brown.

In the play above, New York runs a four-man pressure where the off-ball linebacker loops around an interior rusher on the line of scrimmage to get a free run at the quarterback. What is Mac supposed to do here? He does all he can to get the ball out “hot” to White in the flat.

On a positive note, it’s clear that Mac can drop the deep ball in the bucket when he gets the opportunity to throw downfield.

Here, Jones reads the deep safety in the middle of the field and knows he has Jakobi Meyers working a slot fade one-on-one. He takes a quick peek inside to hold the safety, then drops it on a dime for a gain of 24 yards.

But in all likelihood, it’s a combination of everything; Jones needs to take more shots, the receivers need to get open more, and the offensive coordinator needs to scheme it up better.

2. Pats OC Josh McDaniels Needs to Share in the Blame for Offensive Struggles

Last week, our second-guessing of McDaniels was the conservative play-calling, especially in the red zone. In Sunday’s win, there was some of that, especially after J.C. Jackson’s first interception: run, run, screen, false start, screen, underneath throw on 3rd-and-14. Yuck. On top of that, McDaniels needs to do a better job of utilizing his new weapons in the passing game. Nelson Agholor was a legit deep threat for the Raiders last year. Where is that this year? The Pats are a combined 2-of-7 in the red zone in the first two games. Didn’t Bill Belichick sign two tight ends to create mismatches and win contested catches in the red area? So far, Hunter Henry and Jonnu Smith had one target in the red zone against the Jets. Agholor, Henry, and Smith were good players for their old teams. Smith had eight red-zone touchdowns for the Titans last year, Henry had 21 TDs over four healthy seasons with the Chargers, and Agholor had six touchdowns of over 20-plus yards with the Raiders last year. The OC needs to be better.

The positive spin on what is a bad start for New England’s O-Line is that starting right tackle Trent Brown might be the glue that holds the whole thing together. Brown was ruled out for this one on Saturday, but this isn’t a long-term injury. That’s the good news.

The bad news is that the line play stunk again on Sunday against the Jets and is the main reason the Pats’ offense is fighting for yards out there.

Above, both tackles, Isaiah Wynn and Yasir Durant, serve as turnstiles to Jets rushers, a sight that we see too often.

Another major issue in the early going is picking up defensive stunts of all kinds. The Jets and Dolphins got to Jones by running loopers from the second level, and the Pats are struggling to pick up those blitzers coming from off the line. Some of the stunts are just simple DT/DE’s too.

In the first two weeks, New England’s offensive line wasn’t good enough in pass protection to produce an explosive passing attack, and the O-Line room will shoulder most of the blame.

4. Although Flashes Are There, Waiting on Breakout Game for Hunter Henry & Jonnu Smith

We still are waiting on the break-out game for tight end’s Hunter Henry and Jonnu Smith, with the Pats TEs combining on six catches for 70 yards in the win over the Jets.

Although the production in the box score is still mediocre, this play is a great example of the schematic advantages of having a pair of two-way tight ends that can catch the ball and block.

In the play, the Pats use a nub formation, where the two tight ends are the furthest players out on that side of the formation against a single-high structure. The Jets walk the deep safety over the two receiver side to Jones’s right, leaving nobody over the top of the two TEs. Then, Mac sells a run with a hard play-action fake, getting the linebacker level to bite, and Henry is by himself up down the seam for 32 yards.

There are flashes with these two, like Jones’s deep ball, but McDaniels’s matchup hunting needs to improve to unlock them, especially in the red zone.

Let’s wait till the coaches film tells the entire story. Still, watching live, offensive coordinator Josh McDaniels tried to dial up a few shot plays to the wideouts, but there was nobody open for Jones downfield at times. In particular, McDaniels tried using hard play-action to get Agholor upfield early on, but the coverage took away the deep routes. The Pats had to resort to trickery again on the double-pass to get an explosive play through the air. It’s a chicken or the egg thing to a degree; does McDaniels need to scheme up better shot plays, or do the Pats receivers lack explosive traits? Probably both, and it’s only fair to spread the blame around.

Wilson threw four interceptions in the first 35 minutes of the game, giving his team no shot to win.

The scariest part about Wilson’s performance if you’re a Jets fan is that this wasn’t one of Bill Belichick’s “seeing ghosts” game plans. The Pats played Wilson pretty straight up, and the Jets rookie still looked utterly lost.

On J.C. Jackson’s second interception, Wilson threw the ball to Jackson like the Pats CB was the intended receiver. The Pats are running a simple one-robber coverage with an inside linebacker in a low-hole zone. It’s man coverage. There are no exotic blitzes. All the Pats defense does is contain rush to Wilson’s right to keep him from escaping to the pocket to his arm side.

Before we inevitably overreact to the Patriots’ issues on offense, remember, one team scored 26 points on the road with zero turnovers while the other crapped all over themselves.

In Davis’s defense, it’s hard to get anything going when Wilson plays as poorly as he did. Still, Davis only caught two balls for eight yards and was the intended receiver on two of Wilson’s interceptions.

On Wilson’s first pick, J.C. Jackson ran a better “over the ball” route than Davis. Davis ran a crosser stem and then sat down right over the middle, but Jackson is all over it, deflects the ball in the air, and then catches the interception on the bobble drill.

Wilson shouldn’t throw that pass, but that doesn’t take away from Jackson’s excellent coverage.

Although the advanced metrics were friendlier to the Pats’ run defense than the box score, allowing 4.9 yards per rush isn’t ideal. It’s difficult to assess run fits on the fly, so we’ll discuss this more in film reviews, but it felt like a similar plan by the Jets as San Francisco and the Rams game last year. Using motion to add on blockers on outside runs, heavy outside zone and pin-pull sweeps with pulling linemen, with the goal being to attack the edges. The Jets had a good plan. They knew Matt Judon is a great edge-setter and that Kyle Van Noy is out with an injury, so they ran at Van Noy’s replacements on the weak side of the formation.

In what felt like a redemption carry from last week’s fumble, Damien Harris broke eight tackles en route to the end zone on a 26-yard TD run that broke the game open for the Pats.

New England appears to block duo on the play, where they double-team inside and get a good initial push off the line. Harris makes himself skinny through the hole, hurdles a few bodies on the ground, and goes full beast mode to run through multiple tackle attempts.

On a day where Patriots head coach Bill Belichick said the wind was difficult for kickers, Nick Folk went 4-for-4 with a long of 49 yards, setting the franchise record with 32-straight made field goals. The Pats offense didn’t make the most of their scoring opportunities to finish in the end zone, but Folk delivered.