Lazar: Ten Things We Learned From the Patriots’ 27-24 Win Over the Chargers

The Patriots deliver a huge statement win in Los Angeles. 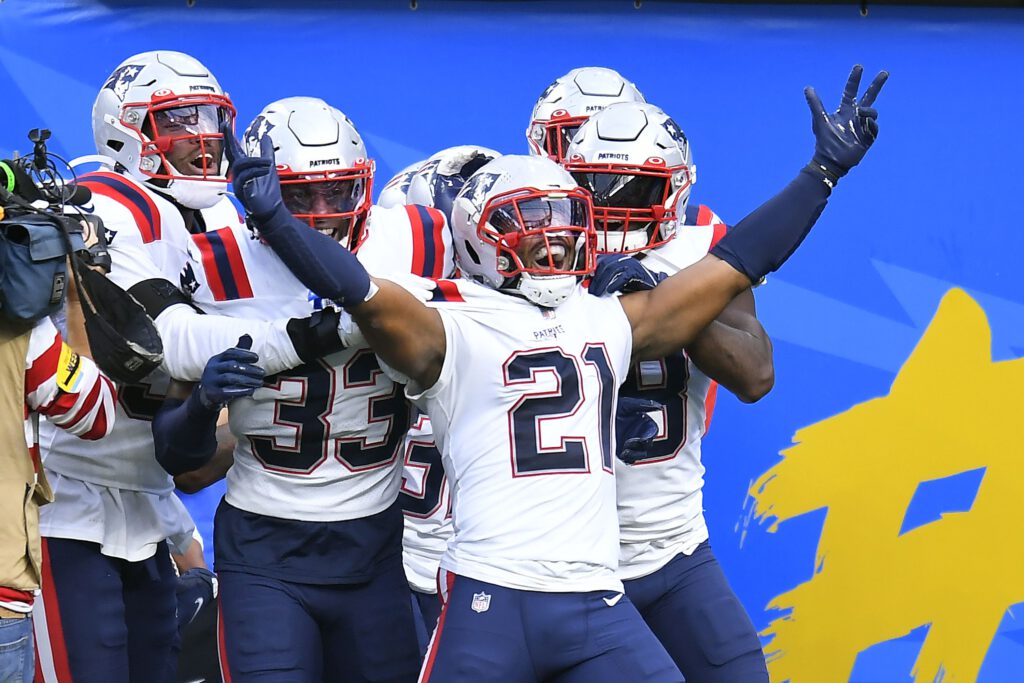 New England proved they could beat a quality opponent on the road and are trending in the right direction to make a playoff push in the AFC this season.

Although the rest of the AFC is on notice, an even bigger statement by the Patriots was that they beat a talented Chargers team without their A-Game. New England had a touchdown called back due to a penalty, a fumble in field goal range, and back-to-back red zone drives netted three points with blunders in play-calling by offensive coordinator Josh McDaniels.

In the post-Brady era, a thin margin of error usually means that those miscues would be too much to overcome, and we’d get another close but no cigar loss full of moral victories.

However, the Patriots didn’t allow those errors to sink them on Sunday. Instead, they got a game-changing pick-six from safety Adrian Phillips and closed out the Chargers with a 14-play, seven-minute drive to make it a two-possession game with a Nick Folk field goal.

The last few seasons feel un-Patriot-like because a few mistakes bury them. On Sunday in LA, New England’s win felt like an old-school Belichick performance thanks to a resilient football team.

As we know, the NFL is filled with imperfections. Not every play goes your way, not every call goes your way, and gaffes happen; the good teams overcome it all and win anyways.

The Patriots still have work to do before we call them a good team, but they played like a good team against a good team in Sunday’s win.

Here are ten things we learned as the Patriots improve to 4-4 on the season:

Herbert is far from the first young quarterback to struggle against Bill Belichick’s defense and won’t be the last. The Pats limited Los Angeles’s passing attack with a good mix of man-blitz schemes and zone structures to keep Herbert off-balance.

In this play, the Pats use a simulated pressure to get Herbert to feel the rush. New England puts six rushers up on the line of scrimmage, then drops their two inside linebackers into coverage and bait Herbert into throwing “hot” against the blitz. The linebackers dropping off into coverage forms a bracket on the intended receivers, and Myles Bryant closes the gap in zone coverage to break up the pass on third down.

Bryant was a big part of the game plan in terms of the schemed plays, especially on third down.

The Pats bring man pressure with the slot blitz here. Adrian Phillips rallies back to the middle of the field to replace Devin McCourty as the deep safety, McCourty rotates to Bryant’s man, and once again, Hightower drops off as a low-hole help defender. The coverage forces Hebert to hold the ball in the pocket, giving the rush time to get home to force an incomplete pass.

New England’s multiple looks in the pass rush confused the Chargers’ O-Line, and their coverage forced Hebert to hold the ball. For the second straight year, the Pats defense shut down LA’s passing attack.

2. Pats DB Adrian Phillips Gets Revenge on His Old Team

Although the last two seasons have had their ups and downs, Phillips is a constant bright spot in the Pats defense, making his game-changing pick-six against his former team even sweeter.

The pick-six was a miscommunication between Herbert and tight end Jared Cook, but Phillips was in the right spot at the right time to make a play on the ball. Then, he had the smarts to return it to the house when Cook didn’t touch him down after going to the ground.

Phillips had two interceptions in the game, with a tipped pass off Austin Ekeler’s hands landing in his lap. Phillips was a ball magnet.

Every time Hebert dropped back to pass, it felt like either Judon or Barmore were in the backfield to force the Chargers’ quarterback off his spot. Barmore continues to provide an impressive interior rushing force while Judon is a handful in a multitude of ways.

On Judon’s full sack, the Chargers try to block him with the scheme by running a bootleg action where they want to draw Judon inside to let Herbert roll outside. Instead, Judon plays his contain and comes right to Hebert to sack him.

Later in the game, Judon and Barmore combined on a sack where they ran a T/E stunt to get through the ride side of the line. Barmore penetrates between the right guard and right tackle and Judon wraps around him to meet at the quarterback.

The Patriots sacked Herbert three times and hit him on six occasions, which was a significant reason they held LA’s passing offense in check.

Based on our initial viewing, the Patriots appeared to play sides against the Chargers rather than having their secondary shadow LA’s top pass-catchers. The Pats didn’t give Herbert a clean pre-snap man or zone read of the defense by avoiding tipping their matchups.

Here’s one example that paid dividends as the Pats dropped into cover-three and nearly baited Hebert into an interception. The Chargers buy Herbert time by moving the pocket and trying to hit a big play downfield to Keenan Allen. Herbert thinks he has Allen one-on-one downfield with the post-safety, but J.C. Jackson makes a heads-up read by recognizing that there’s no threat into his zone and gets depth on the deep third to meet McCourty at the catch point.

Jones had a season-low in completion percentage over expected (-11) due to an internal clock sped up by the Chargers’ pass-rush in the middle quarters. Still, Mac avoided the catastrophic mistake (turnover) and took advantage of open receivers downfield.

Here, speedy wideout Nelson Agholor gets deep against man coverage with a single-high safety. The safety stays on the near hash and is late to help over the top, so Jones drops it in the bucket to Agholor for his longest air-yard completion of the year (38 yards).

Mac improved on third down as the game wore on by connecting with Jakobi Meyers above. The Pats get a single-high look again from the Chargers and run tight end Hunter Henry on the first in-breaker to occupy the deep safety, which gets Meyers inside the coverage without help, and Jones stands in against pressure to drill the throw to move the chains.

The Pats’ rookie also hit Meyers (17 yards) and N’Keal Harry (15 yards) on the game-sealing drive to get the Patriots in field goal range.

Although it wasn’t Mac’s best, it was more than good enough on Sunday.

Following suit with their quarterback, New England’s O-Line was far from perfect, wiping out two big Damien Harris with holding calls (one touchdown) and some heavy pressure in the first half. However, they leveled out with a 49% success rate on the ground and kept Jones clean enough to make some big plays through the air. We’ll see how it looks on the coaches tape over the next few weeks, but they held it together to get the win against a good front.

The Patriots’ tight end duo only had three catches for 46 yards. Still, the good news is that offensive coordinator Josh McDaniels is starting to figure out their usage: Henry is the route-runner, and Jonnu Smith is the ball carrier.

New England hit on a 33-yard completion to Henry on a play-action crossing pattern. Agholor takes the coverage deep on his vertical route, clearing out the sideline for Henry.

As for Smith, they send him in motion here and fake a jet sweep to Jonnu, who then releases in the flat. With Mac under pressure, he dumps the ball off to Smith in the flat, and Jonnu makes a defender miss to gain 11 yards.

After a breakout game last week, McDaniels is finding creative ways to get Jonnu the ball, and Henry fits in perfectly as a chain-moving tight end. The production in the stat sheet will come.

The only negative takeaway from the Patriots’ stellar performance on defense was against the run, where they allowed 8.2 yards per rush and runs of 75 and 28 yards.

On the 75-yarder, outside corner Joejuan Williams does his job to force the ball carrier back inside, but the pursuit from the Pats’ front seven leaves a lot to be desired. The lack of sideline-to-sideline pursuit leaves Dont’a Hightower alone in the hole with Justin Jackson and Hightower whiffs. To make matters worse, Devin McCourty takes a bad angle to the ball, too, allowing Jackson to break free.

The two big runs made the stats look awful (LA only had a 37% success rate), and the game plan was tailored around stopping the passing game. Still, the Pats need to be better here.

Let’s face it, McDaniels’s red-zone play-calling in the second quarter nearly cost them the game. The Pats scrimmaged from inside LA’s six-yard line on eight plays, and McDaniels called five passes despite facing a terrible Chargers run defense, including a goal-line fade on fourth down to Jakobi Meyers that fell incomplete. Then, McDaniels again called a third-and-one run to Brandon Bolden, and stud safety Derwin James stuffed that. New England overcame McDaniels’ nonsensical red zone play-calling and another Bolden handoff on third down. Still, if they lost this one, we’d be pointing to the second-quarter sequence as a big reason why.

Casuals roll their eyes about Bill Belichick’s focus on special teams when it comes to roster construction, but Olszewski’s impact is the reason why Belichick cares about the kicking game. Olszewski had three returns over 20 yards and averaged 20 yards per return, giving the Pats good starting field position on several occasions. Among returners with at least 50 career punt returns, Olszewski has the highest average in the Super Bowl era (13.2). Although Gunner might not have contributed in other game phases, he had a massive hand in Sunday’s victory.