Lazar: Ten Things We Learned From the Patriots’ 28-13 loss to the Saints 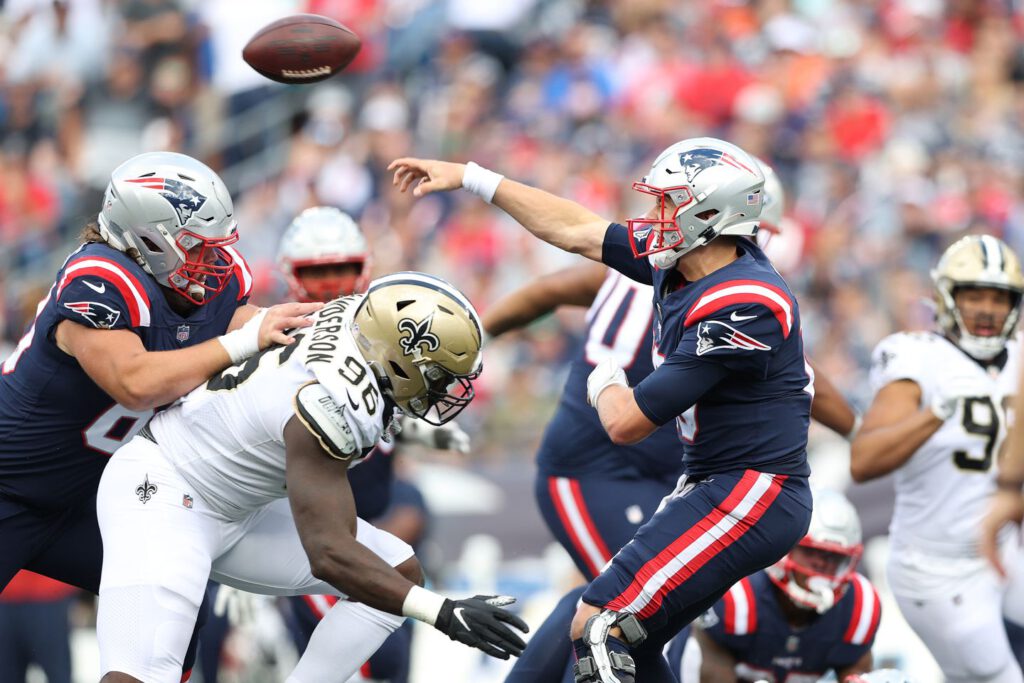 FOXBORO, MA — The Patriots are heading in the wrong direction after a 28-13 loss to the Saints at Gillette Stadium on Sunday.

The level-headed response to a game like that is to preach patience. With new faces all around the team and only three games into the season, 1-2 is far from an insurmountable hole.

However, the product we saw on the Gillette Stadium field from the Patriots this afternoon brings into question coaching philosophies, especially on offense.

Patriots offensive coordinator Josh McDaniels’s game plans are uninspiring and lack anything unique for the teams’ new weapons. There’s very little motion or tempo, and the situational play-calling is at times horrific.

The explanation that it’s three games into the season with an overhauled offense makes sense because it looks like the Pats are calling plays in a training camp practice.

But we are on multiple seasons with this type of look offensively for McDaniels, and the excuses about lacking skill talent are getting old after Bill Belichick’s aggressive offseason.

Defensively, the Patriots faced a quarterback in Jameis Winston on Sunday whose passer rating under pressure (47.5) and against the blitz (33.8) were horrific. Yet, they barely blitzed Winston (eight of 26 drop-backs).

Instead, the Pats used four-man rushes, including on a critical third-and-7 from the Saints’ 28-yard line with 8:22 in the fourth quarter, and Winston beat them from clean pockets.

It’s early for a Patriots team with a ton of turnover on both sides of the ball, but the game plans and situational play-calling in high-leverage situations are letting this team down in many ways.

Here are ten things we learned as the Patriots drop to 1-2 on the season:

Patriots quarterback Mac Jones deserves credit for hanging in there during a tough outing and showing some fight to pull the Pats within one score in the fourth quarter. Plus, he was way more aggressive (12.4 aDOT).

Jones’s first interception was a negative play where maybe you’d like to see Mac take the sack. But he steps up away from pressure into more pressure. What can you do?

When the Patriots kept Jones clean, he made some great throws. Above, he fits a ball into a tight window on a crossing route by Jakobi Meyers.

Here, Jones is well protected and stays with his reads to hit Meyers again on the “sail” route to move the chains.

And look what happens when you get some tempo, time, and space; Bourne in-stride for a big gain.

If you’re looking to nitpick, Jones admitted to some fault on a few of the odd running plays we saw in Sunday’s game, telling CLNS Media, “a lot of the plays, I could’ve stuck with them instead of changing them.”

The Pats weren’t good enough in any area, but Jones showed great resilience on Sunday.

New England’s offensive line is the biggest reason why the Pats’ offense is struggling. Jones was hit 11 times in this game and pressured on 17 drop-backs, which is far too much. The Saints ran a blitz package with six rushing threats, then dropped off into five-man rushes with added wrinkles, and the O-Line couldn’t block it, particularly in the first half.

On Jones’s first interception, the Saints bring five to get one-on-one’s across the board. Both tackles get beat around the corners to force Mac to step up in the pocket, where center David Andrews and right guard Shaq Mason fail to pass off a T/LB twist, and Mac is hit while he throws.

As we broke down last week, the schemed rushes continue to give the Patriots problems (stunts, blitzes, and other exotic pressures).

Although the defense logged three sacks, the pass rush didn’t consistently get to Winston enough to affect the Saints quarterback.

On the aforementioned third-and-7, the Patriots elect to rush four, but it’s initially only three. Winovich chips the tight end on his way to the quarterback, and the only schemed aspect of the rush is an LB/DT twist inside. There’s zero pressure on Winston, and he moves the chains with a 12-yard completion.

The Patriots were without pass-rusher Josh Uche, which was a factor, but it’s shocking that they didn’t blitz Winston more.

A positive note for the Pats defense was a monster performance by Judon. Judon was in on three sacks, including one on third down and in the red zone.

On his red-zone sack, the Saints ran bootleg action where Judon had to contain the quarterback on the backside. Judon reads it immediately and charges Winston for the sack.

In the early going, Judon is by far the best free-agent signing by Belichick this offseason.

One of the lone spark plugs for the Patriots’ offense was wide receiver, Kendrick Bourne. Bourne had a team-high 96 receiving yards and his first touchdown in a Pats uniform.

Bourne gets single coverage on the backside, and Mac floats a jump ball in his direction. The new Pats wideout out-muscles the defender, breaks a tackle, and finds the end zone on a tremendous individual effort.

The Pats were more productive in three-wide receiver sets with Bourne on the field than their 12-personnel package.

New England’s big-money tight end duo is not off to a great start this season. After the Pats got some momentum before the half, Smith’s drop leading to a pick-six was a back-breaker. Henry also cost them with a bad false start on that drive before halftime, forcing them into three points. The Patriots need to get their tight ends going, which falls as much on McDaniels as Henry and Smith.

In a potentially major blow to the Patriots’ offense, running back James White was carted off the field and immediately ruled out with a hip injury. The severity of White’s injury is unknown, but whenever a player is immediately ruled out, it’s usually bad news. In an offense lacking continuity, losing a leader and playmaker like White is tough. Hopefully, it’s not season-ending for the Pats captain.

Although closing out games needs improvement, the Pats’ run defense mostly held Kamara in check with an aggressive approach, which was the best part of Belichick’s game plan.

In this play, the Patriots aggressively play a weak side counter run by having Deatrich Wise and Dont’a Hightower come downhill at the pullers, leaving Kamara with no place to go.

The Pats’ run defense could’ve done more to get the ball back to the offense in the fourth quarter, but they executed the plan to slow down Kamara well for the most part.

The Patriots could be spelling Hightower to keep him fresh. After the long layoff from the opt-out, it makes sense that Hightower looks a little rusty. Maybe the team is trying to maximize his role? It’s still too early to say if Hightower lost a step. I was also surprised by the lack of Chase Winovich in this game with Josh Uche inactive.

10. Pats Running Game a Non-Factor in Loss to Saints

A bonus note that the Patriots probably wish we didn’t need to include; a blocked punt and a kickoff out of bounds. Just add it to the sloppy play for the Pats on Sunday.