Lazar: Ten Things We Learned From the Patriots’ Blowout Victory Over the Jaguars 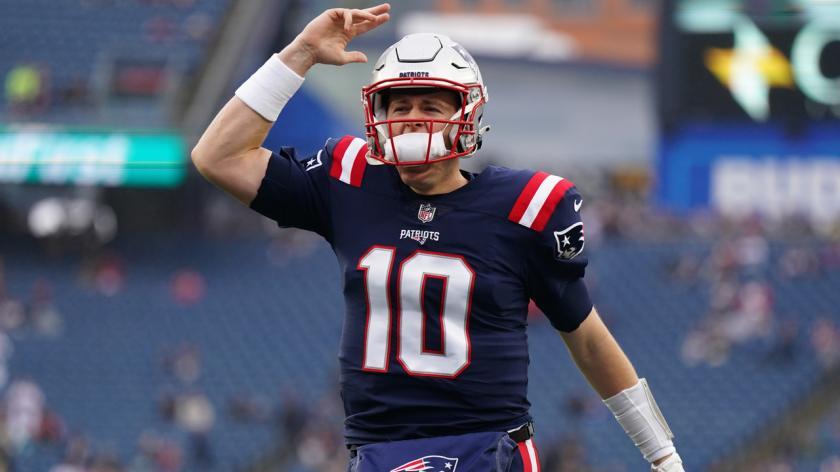 FOXBOROUGH – The Patriots (10-6) took care of business in convincing fashion with a 50-10 victory over the Jaguars (2-14) at Gillette Stadium on Sunday.

In Week 7, the Patriots routed the Jets 54-13, then rattled off seven-straight wins. After hanging another 50-burger on a bad team, could this spark another winning streak?

Although New England “got right” in many phases this week, their win over a Jacksonville team who has already mailed it in this season didn’t change our perception of the 2021 Patriots.

In a way, that’s expected. Nothing the Pats did in a game they won before taking the field should’ve swayed our opinions drastically one way or another.

The Jags’ defense let Mac Jones move the ball by picking on short zones and off-coverage on the outside with only one completion over 15 air yards.

On the one shot play opportunity for Jones in the first half, he checked into a pass against cover-one man on first down and took a sack rather than attacking single coverage to Kendrick Bourne on a slot fade (or Jakobi Meyers on a corner route).

Understanding that the vibe we are giving off is negative towards Jones, he was outstanding on two red-zone touchdowns and made several good reads against Jacksonville’s zones.

Plus, the best thing to come from Sunday’s romp of the Jaguars was Jones loved every second of dunking all over the Jacksonville defense.

If the Pats make a run, we’ll point to Jones’ jaunt up and down the field in Week 17 as the game where he got his swagger back to lead New England in the postseason.

Still, we already knew that Mac’s short game is excellent, and the question remains if Jones and the Patriots’ receivers can make plays downfield against man coverage in the playoffs?

Here are ten things we learned as the Patriots clinched a playoff berth for the 18th time in the Belichick era:

Although we’ll need to see more from Jones and the Pats’ pass-catchers down the field, there was a different vibe from the rookie quarterback after this one.

Mac was feeling himself in a game he needed to see a few shots hit the bottom of the net, which is exactly what happened in an uber-efficient performance.

Jones’s best work came in the red zone, where he made high-level throws and showed great patience from a moving pocket to hit the breakout star of the game Kristian Wilkerson for six.

Starting with the dime, Jakobi Meyers attacks leverage in his release, gets outside positioning on Jags DB Brandon Rusnak on the corner route, and Mac drops a dime in the bucket.

On Wilkerson’s touchdown, the Pats set up a pick play into the right flat with Jones rolling out off jet motion moving in the opposite direction of the flow of the play. The Jags pass off Brandon Bolden in the flat nicely, but Mac stays with the read and finds a wide-open Wilkerson working the back of the end zone (Wilkerson’s man gets caught up in the trash).

Along with his first touchdown pass to Wilkerson, Mac continues to flash playmaking skills on moving pockets and the ability to pick up an occasional first down on scrambles.

Between the 20s, Jones was cooking against the Jaguars’ short zones to his inside receivers.

Here, the Jags show pressure pre-snap with the double-A gap “mug” front but back off at the snap into a cover-two zone. Jones recognizes he has time to let his routes develop and reads the coverage shell, finding Jakobi Meyers in the soft spot of the zone to move the chains.

Defenses will try to take away the short stuff until the Patriots prove they can beat them down the field, but Mac’s proficiency in that area will be enough against weaker defenses.

After a lackluster performance headlined by a bad drop, former first-rounder N’Keal Harry was a healthy scratch as the Pats promoted wide receiver Kristian Wilkerson from the practice squad.

Wilkerson, who frequently flashed separation skills in camp, made the most of his opportunity by hauling in four passes for 42 yards and two touchdowns in Sunday’s win.

Wilkerson nearly had the cherry on top when he got behind the Jags’ defense on a deep over route but dropped a catchable ball from Mac Jones in the front of the end zone.

Although we didn’t get the icing on the cake, Wilkerson’s ability to create downfield separation and make plays was a welcomed sight.

Jags quarterback Trevor Lawrence completed two downfield throws into tight coverage where the defense at the catch point needed to be better.

But it was an overwhelmingly positive day for the defense by rediscovering their identity as a disguising zone coverage team.

The Patriots baited Lawrence into a Kyle Dugger interception with a post-snap zone coverage rotation. Dugger comes from a two-high alignment on a “double buzz” scheme into the middle hook, and Devin McCourty replaces him on the post. Lawrence never sees Dugger come down and throws it right to him.

New England’s defense doesn’t have the cover talent to play man coverage like they used to, so they need to continue embracing zone coverage.

The Pats coverage is at its best when they’re disguising and spinning the dial out of different zone coverages.

After a sloppy performance rushing Buffalo’s Josh Allen a week ago, the Patriots pressured Lawrence more consistently in Sunday’s win.

The Pats ran a twist blitz from the linebacker level on Jacksonville’s opening drive, using the EDGEs dropping into coverage to replace them in a four-man rush. The pressure attacks the Jags’ interior protection, and Hightower loops through untouched for a sack.

Later in the game, it was a simple T/E stunt from rookie Christian Barmore and Chase Winovich, where Barmore split two Jags’ blockers to bring down Lawrence for another sack.

The Patriots’ other rookie from Alabama recorded his first full sack of the season, adding to the most quarterback pressures by a rookie defensive tackle since 2016 (and counting).

However, New England’s rush lane integrity did break down again on third down, allowing Lawrence to pick up the first down with his legs.

In the play, it looks like the interior rushers are slanting inside to open a rushing lane for the wrap player (Winvoch?) to come through the middle of the line. Instead, the wrap never happens, and when Daniel Ekuale slants inside, it opens a hole for Lawrence.

The other possibility is that Deatrich Wise has contain while the Pats were closing off Lawrence’s arm side, meaning Wise needs to hold his ground rather than getting upfield.

Either way, Belichick won’t like the Pats’ front allowing Lawrence to get out of the pocket.

When this duo is at their best, Henry makes things happen on passing downs, and Smith run blocks well (and an occasional screen/catch-and-run touch). This week, we saw that with Henry presenting a go-to target for Jones in a few key spots and Smith blocking at the point of attack.

Here, Henry moves the chains on third down by defeating man coverage in the right flat after Jones moves to his right to elude pressure. From this perspective, that’s where Mac should go in man/third-down situations. Henry is their most consistent target in those pivotal situations.

The box score production hasn’t been what we envisioned from this pairing all season long, but the Patriots will take each shining in their respective strengths down the stretch.

New England has a terrific running back duo in Harris and Stevenson, with both displaying great vision, power and burst as ball carriers.

After each in and out of the lineup over the last few weeks, the Patriots’ offense is much better when both backs are healthy.

On a terrific seven-yard run by Harris, he sets up a slick cutback on a crack toss scheme that’ll make teams second-guess flowing to the edge when they see the outside toss play.

As for Stevenson, his lateral burst and speed to the corner continues to stand out. When things are bottled up inside, Stevenson has the athleticism to bounce runs to the edge and turn the corner.

Whoever the Patriots draw on wild card weekend will have their work cut out for them, especially if the Pats play in bad weather.

Patriots corner J.C. Jackson had his hands full last week with Stefon Diggs and battled in a loss.

This week, Jackson blanketed every Jags wideout lined up across from him and jumped in front of a Lawrence pass for an interception.

On the pick, Jackson beats Austin cleanly to the spot on a curl route and makes a good play on the ball.

Jackson also had excellent coverage on Jones on an end zone corner route by playing his leverage perfectly to smother the route.

If the Pats have any chance in the postseason, they need Jackson Island to show up.

Another defensive back that stood out was Kyle Dugger, who made two terrific tackles against the run and capped it off with an interception. Dugger’s interception was another instinctive ball-hawking play in zone coverage, a standout trait of Dugger’s that we believe could be an elite phase of his game. The Pats’ safety is developing into a playmaker who is finding the ball and making plays.

One element from Sunday’s game that stood out after speaking to center David Andrews was that the Pats’ O-Line didn’t allow a sack. Andrews pointed to Jacksonville’s aggressive blitz package and how well the offensive line handled those looks. We’ll see how it all came together in film review, but New England controlled the line of scrimmage.

With a win and Miami’s loss, the Patriots are officially going back to the playoffs for the first time since 2019. I know, what a long drought. Although a division crown is unlikely, it’s not impossible. If the Bills are upset by the Jets and the Pats take care of business in Miami, they’ll win the AFC East. The Pats could also secure the top wild-card spot as the number five seed with a win next Sunday against the Dolphins (potentially setting up Pats-Bills III).