The Patriots' offense is finding their winning formula. 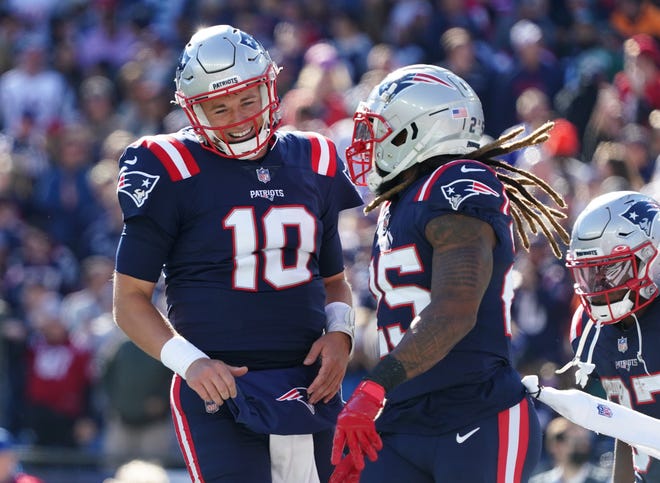 FOXBORO, MA — The Patriots delivered a 54-13 beat down of the New York Jets at Gillette Stadium on Sunday.

However, the Patriots’ offense scored a legit 54 points with only one drive starting in Jets territory. New England had run-pass balance, nine different receivers caught a ball from Mac, offensive coordinator Josh McDaniels called a great game with creative wrinkles, the O-Line controlled the trenches, and it all came together how they drew it up.

When the Patriots take on better defenses, it probably won’t look as pretty as it did on Sunday. Still, the Pats played a complete game where the puzzle pieces offensively fit together and gave McDaniels a blueprint for the rest of the season.

If that wasn’t enough good news, even though Zach Wilsons’s snaps were limited by injury, there’s absolutely no doubt that Pats rookie Mac Jones looks like a long-term answer at the position for New England, and the same cannot be said about Wilson with the Jets.

Jones continues to get better each week, learns and adds more to his bag with every drop-back, and is making you forget about capping his potential “ceiling” in the NFL.

Without further ado, here are ten things we learned as the Patriots improved to 3-4:

(Shoutout to @FTBVids_YT for the clips)

Jones had one of his least-accurate days of the year in Sunday’s victory, but he was still respectable in the CPOE department (-0.6), and his downfield aggressiveness was great.

With the Jets playing primarily post-safety (single high) coverages in the secondary, Mac went big-play hunting by attacking single coverage on the outside. He was unable to connect early but hit wide receiver Kendrick Bourne with a 46-yard dime on a go ball that was Jones’s best downfield throw of his career to date.

Along with the deep ball to Bourne, we also saw Jones attack downfield off play-action several times. Above, the Pats hold the underneath coverage with a play-action fake and clear out the left sideline for Hunter Henry. Mac hits Henry on the post pattern behind the linebackers with a bit of pressure in his face.

Jones hit some big plays downfield by going after post-safety structures and was sharp on third down as well. Above, N’Keal Harry takes the post safety deep, and the Jets’ linebacker in the low hole can’t get deep enough off the line of scrimmage to get underneath Jakobi Meyers’s route. Mac hangs in the pocket to let Meyers work the in cut and hits him for a first down.

Lastly, McDaniels also dialed up a run-pass option in this one that harkens back to Jones’s days at Alabama. Jones gets his eyes outside to the slant/flat combination with the numbers in the box and throws the slant to Nelson Agholor against man coverage.

Mac’s performance will be overlooked as one game against the lowly Jets, but this is two weeks in a row now that Jones is letting it rip downfield.

2. Patriots Find a Successful Starting Five on the Offensive Line

The Patriots finally settled on an offensive line combination that we’ve been clamoring for since starting right tackle Trent Brown went down in Week 1. From left to right: Isaiah Wynn (LT), Ted Karras (LG), David Andrews (C), Shaq Mason (RG), and Mike Onwenu (RT). The group rewarded the coaching staff by paving the way for 148 rushing yards and only allowed four quarterback hits. New York’s defensive line is solid, too. We’ll see what it looks like on tape this week, but the Pats might’ve finally figured it out.

The good news is that Patriots offensive coordinator Josh McDaniels heard our pleas to create opportunities for tight end Jonnu Smith in the passing game. But the bad news was that Smith didn’t return to the game due to a shoulder injury. Still, the script for Smith was exactly what everyone envisioned when he signed as a free agent in March. My guess is it took a little longer to get on the same page than anticipated. Hopefully, this is a sign of things to come.

The first schemed touch for Smith was a well-designed screen pass by the Pats. New England uses hard play-action and a crosser out of 12 personnel by Hunter Henry to clear out the sideline for Smith, who gets a block from left tackle Isaiah Wynn to spring him for 28 yards.

Then, Smith lines up at fullback in the backfield, and the Pats run play-action again. The Jets linebackers bite on the fake, and Smith releases out of the backfield on a corner route for a 24-yard gain.

Although Smith’s injury could take some wind out of the sails, the creativity in his usage was precisely what the doctor ordered from McDaniels. More, please.

The game when the Patriots had the ball was decided early by Damien Harris, averaging nearly eight yards per rush against the Jets defense, whose one strength is their D-Line. Harris’s success on the ground got the Jets out of their two-high shells and began to open things up in the passing game for New England, and that was all she wrote.

On Harris’s game-long 32-yard run, the Pats ran a draw play with Harris as the lone back. When Jakobi Meyers angles inside to make his block, Jets corner Byrce Hall gets caught jumping inside. Harris sees it, bounces it, and accelerates into the secondary. Great vision and burst from the Pats’ lead back.

5. Belichick Goes for it on Fourth Down and McDaniels Deals in Win vs. Jets

Things must be going well offensively if Bill Belichick is keeping the offense out there on fourth down. Belichick decided to go for it on fourth-and-one from the New York 35-yard line, and the Pats converted on a rub concept to Jakobi Meyers in the flat. Seven plays later, Mac threw a touchdown pass to Hunter Henry to end the half with New England up 31-7. Imagine that? The Patriots had the offense firing on all cylinders by playing a brand of football we can all get behind: up-tempo pace, effective rushing attack, spread the ball around, incorporate the tight ends, and let Mac cook against single-high. This, folks, is the formula.

We were talking about lacking outside cornerback depth before the Stephon Gilmore trade, and now it feels like a potential Achilles heel for this teams’ playoff aspirations. Veteran Jalen Mills deserves some leeway in matchups against CeeDee Lamb and Chris Godwin in recent weeks. But it wasn’t pretty again this week for Mills, who whiffed on a tackle attempt on a play that went for 13 yards, gave up a TD to Corey Davis on the goal line, allowed a 21-yard completion to Jamison Crowder, and was called for a ticky-tack DPI on third down. In the second half, third-year corner Joejuan Williams bounced back after blowing a zone coverage assignment early. But he still feels shaky back there.

The only guy you can trust at outside corner is J.C. Jackson, who had a pretty interception at the end of the third quarter. The rest are wildcards.

7. Pats Run Defense Has a Day vs. Jets

Following the theme of everything working as it should, the Patriots’ run defense held the Jets to a 42 success rate and stuffed them twice in short-yardage situations.

The Pats’ defense started the party by stopping rookie running back Michael Carter for one yard on the first offensive play by the Jets.

In the play, Lawrence Guy (DE) and nose tackle Carl Davis use their upper-body power to knock the offensive line backward and force the ball carrier to cut back into inside penetration by linebacker Ja’Whaun Bentley.

Rookie Christian Barmore also registered a TFL on fourth down by slanting inside the interior blocker at the snap to penetrate the backfield to make a critical stop.

New England’s run defense was ninth in Football Outsiders’ DVOA metric heading into Week 7, and that ranking will likely improve after another strong showing on Sunday.

Bryant wasn’t perfect in his efforts to replace starting nickel corner Jon Jones, but he was serviceable and is the best option for the Pats until Jones returns.

The good was a slot blitz on third down that led to a huge sack of Jets starter Zach Wilson and a nice cat-and-mouse rep with Wilson where he took away the Jets’ first read. On the other hand, Bryant missed a third-down tackle attempt that would’ve forced the Jets to punt. Still, the Jackson-Mills-Bryant trio was better than the alternative with Joejuan Williams in the game.

9. Pats WR Kendrick Bourne is a Nice Find for the Patriots

Bourne is a fun player to watch and cover in his first season with New England. The Pats wideout brings a ton of positive energy, is accountable, plays fast, seems to get the playbook, and can pass!

Bourne threw his first career pass for a touchdown on a trick play to wide receiver Nelson Agohlor on the Pats’ opening drive. He also caught a 46-yard bomb from Mac. After making a route-running mistake against Dallas and owning it, it’s easy to like Bourne. It’s even easier to like the new Pats wideout when he’s making good plays on Sundays as well.

Believe it or not, the Patriots entered the Week 7 slate as the best play-action defense in the NFL, allowing only six yards per pass attempt against play-action this season.

The Pats defense stayed hot against play-action with second-year DB Kyle Dugger’s second interception in as many games.

The Jets try to get the tight end behind the linebacker level off play-action, but the Pats linebackers drop far enough underneath the tight end route after the fake to cause a high throw by backup QB Mike White, and Dugger picks it.

New England’s defense has its issues in the secondary, but the combination of a strong run and play-action defense will help this group get opposing offenses into third down.