Lazar: Ten Things We Learned From the Patriots’ Blowout Win Over the Browns 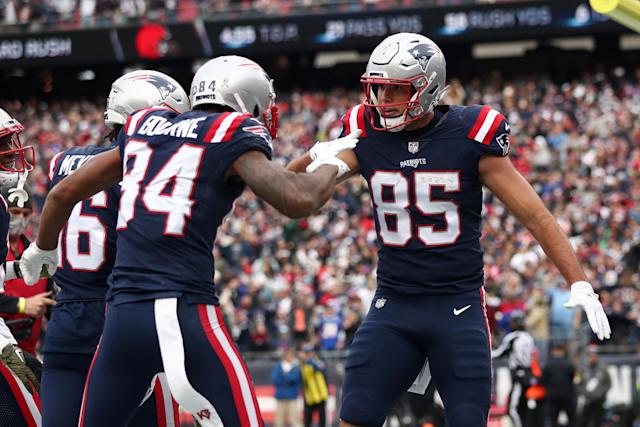 Riding a four-game winning streak, Bill Belichick’s team is no longer just having a “nice” season with a promising rookie quarterback who makes you feel good about the future.

The Patriots are for real. They’re firing on all cylinders with a dominant defense, an offense capable of scoring 45 points on a good defense, and Belichick’s coaching staff is hitting all the right buttons (they pantsed Kevin Stanfanski and Joe Woods in this game).

Although it’s important to take it week-by-week, the Pats find themselves in the mix in the AFC playoff picture and are one of the hottest teams in the conference at the present moment.

We are no longer talking about moral victories, which is great. We are talking about playoff seeding, a divisional race with Buffalo, and how far this team can go this season.

Here are ten things we learned as the Patriots improved to 6-4 on the season (h/t @FTBVids_YT for the clips):

After two off weeks against tough pass defenses, rookie Mac Jones was electric in New England’s blowout victory. Our biggest takeaway in our midseason report card was that Jones needed to step up his game against upper-echelon defenses: well, he did, and then some.

Mac averaged 8.6 yards and added 0.6 expected points per drop-back while converting six-of-eight third downs in his best performance in the NFL to date. He was also three-for-four on passes that traveled more than 15 yards in the air against the Browns.

Jones finds tight end Hunter Henry in the cover-two void on the first third down by reading the outside defender carrying the vertical to eight yards. Once the CB stays outside, Mac knows he has Henry breaking on the inside drop by the cover-two hook/seam linebacker, and it’s an easy conversion.

Along with excellent third-down processing, Jones also dropped it in the bucket downfield several times.

Here, the Pats open the boundary for Jakobi Meyers by lining him up in a condensed split. Meyers then shakes Browns’ rookie cornerback Greg Newsome at the line of scrimmage, and Jones drops a dime for a 26-yard completion on third-and-9.

Later on, Mac found Henry again for a 19-yard completion by driving a corner route into a tight window. This time, the Pats go 3×1 to clear out the sideline for Henry, who has outside leverage again on a linebacker with the deep safety occupied by the vertical routes, and Mac connects.

Finally, Jones threw an absolute rocket up the seam to Kendrick Bourne to cap off a 99-yard touchdown drive. In the play, the Browns are playing cover-one man with the post-safety starting on the far hash, and Mac puts the ball in a perfect spot for Bourne to make an incredible catch.

The Patriots had everything rolling in Sunday’s win, including Jones’s tremendous performance against a very good Cleveland defense.

2. With Trent Brown Back, Pats’ O-Line Has Best Performance of the Season

On initial viewing, the Patriots’ offensive line was finally as advertised heading into the season when you factor in the level of competition. Myles Garrett and an elite Browns defensive front was a non-factor: the Pats’ RBs averaged 5.3 yards per rush against the number-two rated run defense, and Cleveland’s pass rush didn’t affect Mac Jones much.

The lone surprise was standout second-year offensive lineman Mike Onwenu being the odd man out with Brown returning. The Pats opted to maintain their interior continuity by keeping Ted Karras at left guard, Brown at right tackle, and Onwenu going to the bench. Although he cycled in plenty, benching arguably your best offensive linemen was a surprise. We’ll see if that continues.

One other note: although it wasn’t perfect, left tackle Isaiah Wynn held his own against Garrett. There was a sloppy cut block that led to a sack and an illegal hands to the face penalty. But, on the whole, Wynn held Garrett in check with some help by the chipping backs and tight ends.

Patriots offensive coordinator Josh McDaniels had an up-and-down start as he figured out his new personnel and a rookie quarterback. We’ve been hard on the Pats’ OC here. However, McDaniels was the best offensive play-caller in the building (Stefanski is regarded as a good one, too). The Pats cycled in a great mix of outside runs and reverses, screens, and quick-game concepts with their staple run/pass schemes to keep Cleveland’s defense off-balance. McDaniels planned ways to neutralize Garrett and opened up the Browns’ run defense with a balanced rush plan (inside, outside, WR carries, etc.). The Pats’ OC was terrific, and when you combine the fact that he’s finding his way as a play-caller with Jones’s development, other teams around the NFL are beginning to take notice.

New England’s RB factory churned out another one in fourth-round pick, Rhamondre Stevenson. After missing practice all week due to a concussion, Stevenson had his first 100-yard rushing performance in the NFL and ran for two TDs while replacing Damien Harris as the lead back. Stevenson can play, and his contact balance and power stand out.

Here, the Pats get Stevenson free on a duo scheme with a great blocking on the right side (Shaq Mason turns out at the point of attack). The blocking gets him rolling, but then Stevenson does an excellent job to keep his balance and bounces off contact for a 16-yard gain.

After a bruising five-yard run got the Pats off their own goal-line, Stevenson got into space on a crack toss play with jet motion holding the second level. N’Keal Harry executes a terrific “crack” block on the play-side DE to get Isaiah Wynn free on the pull, and Stevenson does the rest to convert on third-and-one.

Patriots head coach Bill Belichick and defensive play-caller Steve Belichick got Browns’ head coach Kevin Stefanski to blink. In their opening TD drive, which was also their lone scoring drive, Cleveland averaged over 11 yards per rush, mostly against the Pats’ nickel defense (8 of 11 plays). New England adjusted by playing predominantly base defense on early-downs until the game got out of hand, and the Browns obliged by turning it into a spread/empty game. The Pats gladly allowed the Browns to put the game in quarterback Baker Mayfields’ hands, defended the spread concepts with early-down zone coverages, and got the Browns to stop running the ball. We knew New England’s defense had an excellent shot at winning a Baker game, and the Browns let it happen. Great stuff by the Belichick’s to bait Stefanski into his spread concepts.

6. Pats Run Defense Turns it Around After Ugly Start

The Browns ran the ball down the Pats’ throats on their opening drive, but an adjustment to more base fronts and more aggressive play at the point of attack turned things around.

With Cleveland threatening on their second-half opening drive, the Pats made a key stop on third-and-two by sending linebacker Ja’Whaun Bentley on a run blitz. Bentley fires into the backfield at the snap and tackles running back D’Ernest Johnson for a loss.

New England’s personnel strategy and game script helped mitigate the damage on the ground, but they evened out in the trenches as well.

With the Browns turning things into a drop-back passing game, the Pats spun the dial on Baker Mayfield by rotating between cover-one man, cover-two, and cover-three structures.

On Kyle Dugger’s interception, the Patriots show a post-safety coverage before the snap, baiting Mayfield into the underneath throw. Baker thinks he has an out-breaking route against an inside-leveraged Dugger with the outside corner carrying the vertical. Instead, the Pats fell into cover-two, and either Dugger or Jalen Mills could’ve picked off the pass.

On most third downs, the Pats went into their cover-one man looks and played tight coverage in the backend aided by good pass rushes from the usual suspects (Judon, Barmore, Wise, KVN).

The Patriots’ secondary found a formula over the last month by confusing opposing quarterbacks with disguises and post-snap rotations.

New England has a matchup weapon in tight end Hunter Henry near the goal line. Henry has seven touchdowns in his last seven contests, logging his first multi-touchdown game in a Pats uniform on Sunday.

Henry’s first touchdown was on a pretty ball from Mac against man coverage. Henry wins early in the route to open the passing lane into the boundary, and Mac drops it in the bucket.

Henry flashes his suddenness in his routes on his second touchdown by shaking Browns’ safety John Johnson and creates an easy throw for Jones.

New England desperately needed a red zone threat that could create mismatches, and they found one in Henry.

After only four catches by wide receivers a week ago, Bourne and Meyers combined for 190 total yards and two touchdowns on 11 touches.

One of the keys to the Pats’ offensive game plan was Bourne’s carries, which opened up the inside runs by Stevenson as the game progressed.

Plus, in a great moment to cap off a great day for the Patriots, Meyers finally scored his first receiving touchdown in the NFL by bouncing off a tackle and running it in for six.

The Patriots might not get 17 yards per touch out of Bourne and Meyers every week, but they’ll need a similar spark out of the position group.

10. Short Week Ahead With Falcons on TNF

As Belichick put it in his post-game press conference, it’s Wednesday night for the Patriots. Although the four-game winning streak is great, Thursday night in Atlanta is a classic trap game: on the road, short week, coming off a statement win at home. The Pats need to take care of business (I will be in Atlanta for this one, so make sure to follow all our coverage).