Lazar: Ten Things We Learned From the Patriots’ Dominant Win Over the Falcons 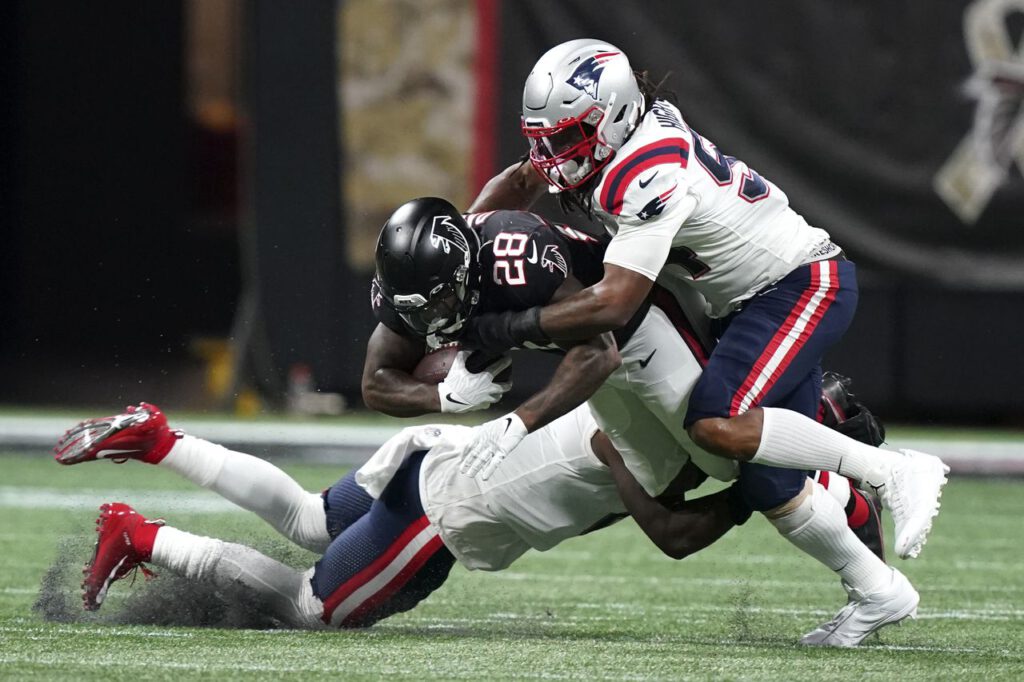 ATLANTA, Ga. — The Patriots (7-4) took care of business on the road with a 25-0 victory over the Atlanta Falcons (4-6) at Mercedes-Benz Stadium on Thursday Night.

In a short week following a statement win over the Cleveland Browns only four days ago, it wasn’t going to be the Mona Lisa or a Picasso for the Patriots on Thursday Night Football.

The NFL’s money-grab for another primetime window almost always lends itself to some sloppy football, and there was undoubtedly sloppiness by the Pats offense and special teams in this one.

Plus, defensively, Belichick has built a bully that’s one of the NFL’s best defenses thanks to a nasty front seven that is blowing up opposing offenses from the line of scrimmage on back.

We are now at the point of the season and in New England’s lightning-quick rebuild where their defense can carry them while the offense has plenty in the tank to blow out an inferior opponent.

If you find yourself quibbling over style points for the Pats offense, don’t. Now it’s on to a decisive four-game stretch with the Titans coming to Foxboro in ten days (Pats next five weeks: vs. TEN, at BUF, bye, at IND, vs. BUF).

Here are ten things we learned as the Patriots improved to 7-4 on the season:

Dont’a Hightower and Ja’Whaun Bentley are downhill battering rams that consistently blow up the line of scrimmage. The D-Line does its job to keep the second level clean, and the Pats are much stouter on the edge with Judon and company.

We saw a flash from an unsung player in nose tackle Carl Davis in their key fourth-down stop. Davis bench presses the center two yards into the backfield and makes the entire play happen.

Earlier, Judon sets the edge while Hightower comes downhill to press the guard to reset the line of scrimmage, allowing Davon Godchaux to run the play down from behind.

The Pats got contributors across the board in the pass rush, but the linebackers again led the way with Hightower and Bentley running a stunt to hurry Ryan into a game-changing interception above (also check out Kyle Dugger’s jam on Kyle Pitts, more on that soon).

The Patriots are shutting down opponents by overpowering them at the point of attack. It’s old school, and it’s fantastic.

Although it wasn’t a full-on kitchen sink game for the Patriots on Pitts, New England threw several different coverages at Pitts and got a terrific effort from Kyle Dugger in man coverage.

The Pats didn’t bracket Pitts or block him at the line of scrimmage like a gunner on the punt team, but several different man and zone techniques were used to keep Pitts at bay.

Dugger had arguably his best game in coverage in his two-year career in man coverage.

Above, the Pats’ safety gets beat initially on a slant by Pitts on third down. But Dugger stays with the play and drives on the catch point to break up the pass.

On this third down, Dugger (left) plays a perfect press-man technique in cover two-man, where he uses his safety help to play trail technique with inside leverage and smothers Pitts.

Shutting down Pitts, who came into the game third among tight ends in receiving yards, is a great indication that Dugger is developing as a man coverage defender.

Patriots quarterback Mac Jones wasn’t as sharp in his first taste of Thursday Night Football and veteran defensive coordinator Dean Pees. Although Jones was efficient in the first half, Pees limited Mac with timely blitzes and frustrated the Pats’ rookie by forcing shorter throws.

We still saw flashes from Mac on a perfectly-placed crossing pattern to Hunter Henry on third down and a nice slide-up and deliver throw to Kendrick Bourne on a fourth-quarter FG drive.

But he was a net-neutral in expected points added (0.0) and threw an interception in the second half, but Atlanta couldn’t take advantage.

Jones got too greedy trying to push the ball downfield after taking what was there all night on his interception. The Pats ran a four verticals concept with double moves on the outside to flood Atlanta’s cover-three zone. Mac looks left to move the zone and then returns to Jonnu Smith’s seam route, thinking he moved the post-safety out of the way. But Falcons ballhawk A.J. Terrell jumped Smith’s route. Terrell seemed to know that Jones was staring left to come back right and made an instinctive play. But Mac needs to stick to confirm his read there.

The Pats also allowed several blitzes by Pees to get home, struggling to pick up second and third-level rushers all night. It’s a short week, and Pees throws the kitchen sink in his blitz package at you? It happens.

Jones and the Patriots’ offense did enough to survive and advance on a short week, which is the most important thing. Unfortunately for the aesthetic, the style points weren’t there.

With only one non-padded practice this week, it’s not surprising that the Patriots stuck with the same starting five on the offensive line that dominated against the Browns on Sunday. Although the blocking was good in spurts, there were issues in pass protection with blitz pickup.

New England’s running blocking was once again dominant, though. In the play above, the Pats run a lead-draw scheme with right guard Shaq Mason and right tackle Trent Brown fanning out at the point of attack. That creates the back-on-backer situation for fullback Jakob Johnson, and Damien Harris breaks off a 14-yard run.

The Pats averaged 4.5 yards per rush with a 41% success rate as Atlanta couldn’t stop New England on the ground when the passing game execution allowed them to string plays together.

To the dismay of fantasy football owners everywhere, Pats running backs Damien Harris (ten carries) and Rhamondre Stevenson (12 carries) had almost an even split in rush attempts. For Stevenson, it’s a good sign that the coaches still want to work the rookie into the game plan even with Harris back.

Here, Stevenson makes a good and decisive decision to bounce outside of Jakobi Meyers’ block when Meyers washes down the outside corner. From there, it’s all Stevensons’s acceleration into the open field and a nasty stiff-arm at the end of the run.

Harris is a great scheme fit in New England’s power rushing attack, while Stevenson has excellent instincts and a well-rounded style. Figuring out how to use both backs is a good problem to have.

Based on our initial viewing, the Patriots seemed to stick with what was working coverage-wise by spinning the cover-three/cover-two dial on early downs and locking down in man coverage on third down. Although the Falcons’ weapons were limited, it’s hard to argue with the Pats’ results with this formula in the backend. Their development as a zone coverage defense is impressive, as they’ve played both MOFO and MOFC well.

There are always questions about McCourty’s future whenever it feels like he’s showing his age, but you look at the body of work by season’s end, and DMac is still playing at a high level.

On Thursday night, McCourty was an elite center-fielder, helping take away deep shots and ranging over the top to make plays.

Here, the Falcons had an opportunity to hit a big play down the sideline when Jalen Mills doesn’t get enough depth on the deep third, but McCourty comes from centerfield to break up the pass.

McCourty put on a clinic with teaching tape on playing deep safety for all the young free safeties out there.

The Patriots have a young stud on the defensive line in Christian Barmore. With Barmore, his consistency to perform at a high level every week stands out. Some rookies flash a play here or there but don’t string it together. Barmore is putting high-end tape out weekly.

On a drawn hold on third down, Barmore uses a bull rush to get into center Matt Hennessy’s body and then finishes with an arm over, and Hennessy is overwhelmed and grabs him.

Barmore also had a tackle for loss in the run game and pushed the pocket all night. New England hit a home run with the second-rounder.

Patriots linebacker Kyle Van Noy is getting healthy, and he’s heating up for the Pats defense. Last week, it was five stops and a sack. This week, it was two sacks and a pick-six.

On his key third-down sack, Van Noy does a great job of playing a cat-and-mouse game with Ryan. As Ryan winds up, KVN jumps to get into the passing lane. As soon as Ryan pulls it down, Van Noy closes and finishes the sack.

With six games remaining in the season, Pats free-agent splash Matthew Judon already has a career-high in sacks (10.5).

Judon uses a speed-rip move to dip underneath Falcons’ right tackle Kaleb McGary for a sack. We talk about Judon every week, and he’s deserving. He’s the MVP of the defense.