Lazar: Ten Things We Learned From the Patriots’ Preseason Finale 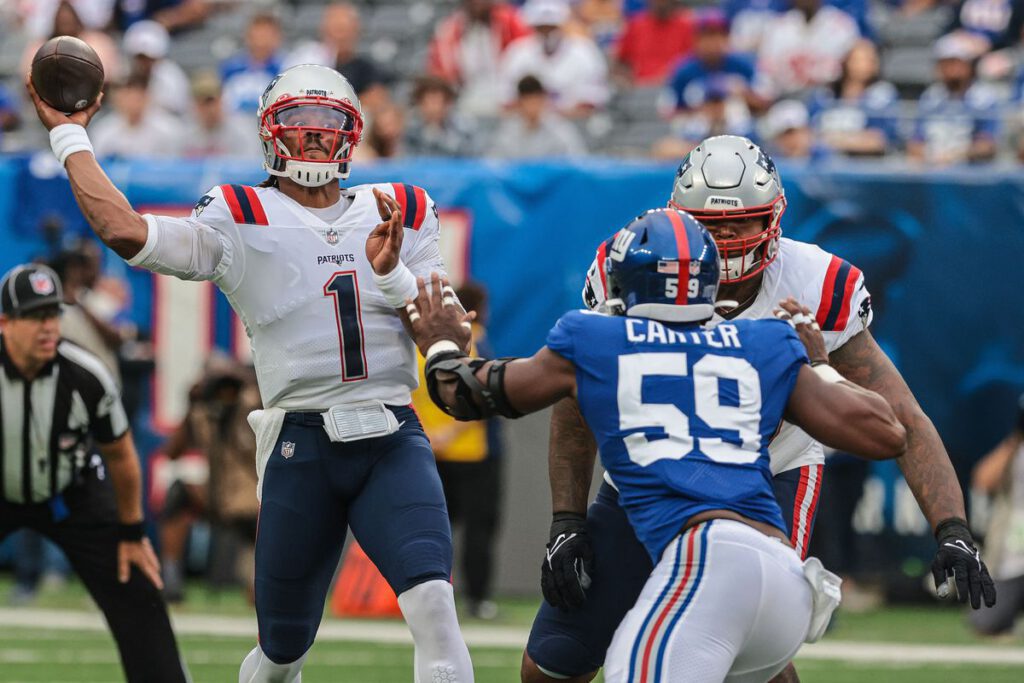 East Rutherford, NJ — The Patriots wrapped up the preseason with an 22-20 victory over the Giants in Sunday night’s preseason finale at MetLife Stadium.

Although Newton appears to be the guy for the opener, the veterans’ performance against the Giants’ starting defense left a lot to be desired (2-for-5, ten yards, interception, three points).

On Newton’s interception, first and foremost, this is a good ball by Cam. He puts it on a line over the linebackers’ head on a platter for Meyers with the safety closing over the top. Good throw, good placement, great play by linebacker Blake Martinez. Here’s the catch; the correct read is to Kendrick Bourne up the left sideline. Martinez drops into the deep hole to cover Meyers’s vertical very smoothly, he sees it quickly, and the safety is splitting the distance between Bourne and Meyers. The throw itself is great, but the read is to Bourne because there’s a higher probability of a completion.

This summer, the former MVP made enough improvements to keep the starting job, but rookie Mac Jones is also making significant progress and should be a factor this season.

Here are ten things we learned from the Patriots preseason finale win over the Giants:

1. QB Mac Jones: The Good and the Learning Curve

The Patriots’ first-round pick entered the game on New England’s third possession (11:20 second quarter) with the top backups. Even with backups around him, Jones drove the Pats into field goal range on his first drive and then carved up the Giants’ backups for back-to-back touchdown drives.

Jones had a tremendous first preseason outside of a few rookie moments, finishing the summer by going 10-for-14 for 156 yards and a touchdown.

On Jones’s first NFL touchdown pass, he ran the Pats’ staple HOSS Z Juke flawlessly. The Giants fell into a cover-four structure with the linebacker over the slot widening into the flat. That left the boundary corner to Isaiah Zuber’s side responsible for working over the top of the seam, and Jones released the ball too quickly for the corner to recover.

Later on, the Alabama product threw tight end Devin Asiasi open on a back-shoulder seam ball. Mac saw the linebacker with inside positioning and a deep safety in the middle of the field, so he threw the back shoulder to help Asiasi get open. That’s a savvy vet throw.

Although we’d like another look at a few plays in film review, the last frontier for Jones is making quicker reads of post-snap coverage rotations. This week, the Giants got him by showing one thing with their safeties pre-snap, then rotating into a different coverage after the snap, which appeared to be the case on Jones’s first sack under center. In all, he was terrific this preseason, but post-snap coverage reads is a clear area that needs improvement.

This week, the best player on the field for the Patriots on either side of the ball was second-year linebacker Josh Uche. Uche had three sacks in the teams’ scrimmage with the Giants on Thursday and was an absolute force in his snaps on Sunday night. He’s an outstanding football player.

On Uche’s sack, he used a quick inside-out move to get around Giants starting left tackle, Andrew Thomas. With a push up the middle by rookie Christian Barmore, Uche was able to turn the corner on Thomas and sack Jones. He also beat right tackle Matt Peart with a swim move later on for another pressure.

Although the pressures were nice, Uche’s best play of the night was when he read the “slide” route by the tight end to sniff out a bootleg action by the Giants. Uche never false stepped, smother Jones on the bootleg, and forced an interception.

3. RB Damien Harris is Heading Towards a Huge Season

After the Sony Michel trade, this is Damien Harris’s backfield. Rookie Rhamondre Stevenson and second-year running back J.J. Taylor will spell Harris, but he’s’ the guy, and for a good reason. Harris’s patience, vision, and acceleration make him a clear-cut RB1 on the Pats.

On Harris’s 18-yard run, the Pats ran a lead draw play with fullback Jakob Johnson leading the way. Harris aims his initial rush path directly behind Johnson, which draws the defense to the Pats’ lead blocker, and opens a door for a smooth bounce and burst by Harris. That’s an excellent job by Harris to set the table for a big play.

4. Rookie Christian Barmore Flashing in His Reps on Sunday Night

Barmore was very effective working with the starting defense against the Giants. He used an effective bull rush to help Uche on his sack by walking the left guard into Jones’s lap, making it harder for the Giants QB to escape. Then, he used a push-pull swim move to register a quarterback hit and was involved in a goal-line stop.

5. CB D’Angelo Ross a Dark-Horse to Make the Roster?

With starting slot corner Jonathan Jones and top backup Myles Bryant not in uniform, Ross made the most of his opportunity. Ross made an excellent read and catch on his interception, but it was a third-down tackle in the flat that caught our eye.

The Giants ran a pick play into the flat on third-and-short, and Ross read it perfectly while maintaining his outside leverage to stop Evan Engram short of the line to gain. It seems unlikely that Ross will make the team. Jones’s injury is not significant. But if Bryant is dealing with a long-term issue, Ross has an outside chance to make the final cutdown.

6. LB Ja’Whaun Bentley Off to a Great Start This Season

Fourth-year linebacker Ja’Whaun Bentley is coming into his own this summer. His role will be limited to things he does well, instead of the full-time responsibilities he had last year. Bentley is making better reads of route combinations in coverage, pressuring quarterbacks on blitzes and stunt schemes, and still effectively play the run in the trenches. Bentley will have his limitations in space, but he’s making the most of his skill set. His improvements are reminiscent of Elandon Roberts in his fourth season with the Patriots.

7. WR Kristian Wilkerson Makes His Case for the 53-Man Roster

Wilkerson was fading fast this summer after he initially looked like a real breakout player for the Patriots. In the preseason finale, the 2020 UDFA had four catches for 72 yards.

This 21-yard reception from Jones was a perfect read by Wilkerson. The Pats wideout has a route conversion based on the coverage. He can run a post route against a two-high coverage or sit the route down to avoid the post safety. The Giants give Jones and Wilkerson a post-safety look, so Wilkerson sits the route down. Good read by the young wideout.

8. EDGE Tashawn Bower Can Play, Is There a Roster Spot For Him?

On a team with less outside linebacker depth, Bower would make the roster. He can play. Bower got some reps against Giants starting left tackle Andrew Thomas and was a problem for Thomas. He drew a hold on Thomas with an effective power rush and set the edge nicely to record a run stop. Bower has good play strength and length to execute the assignments the Pats ask of their edge defenders. Unfortunately, it’ll be a numbers game for him on cutdown day.

Winovich is in a peculiar situation. Uche has passed him on the depth chart, while newcomer Matt Judon and the return of Kyle Van Noy bury him even further. Winovich played into the fourth quarter on Sunday night. He is staring at a very situational role, something like his rookie season usage (28.9% of the snaps), and could benefit from a trade where he’ll have more opportunity. Wino is still one of the teams’ best pass rushers, but he’s not going to have a big role in this defense. Free-agent addition Henry Anderson was another veteran that played into the second half for the Patriots.

Second-year tight end Devin Asiasi needed a big game, and he got one in the preseason finale, with four catches for 64 yards.

The Pats got Asiasi going with a tight-end throwback play. Outside zone right with the tight end crossing in the opposite direction. Add a short bootleg motion for Mac Jones in the pocket, and you get the passing lane for Asiasi to catch and run. Asiasi also made a nice adjustment on the back-shoulder seam shown above.