Lazar: The Patriots Defense’s Standout Performance Was the Real Story in Win Over Bills 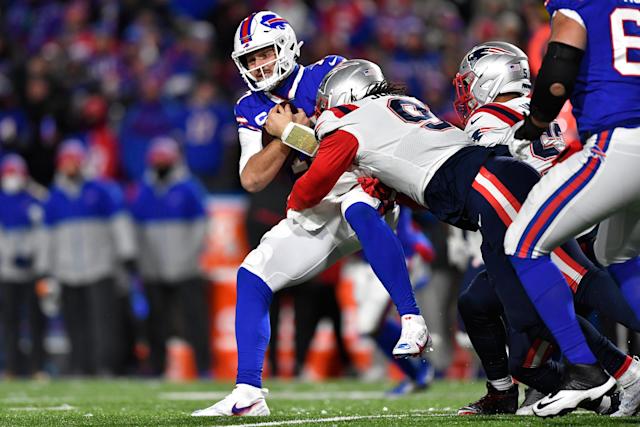 Belichick made a statement to his team by having them live out their physicality and mental toughness on the field.

Monday night’s game is now a memorable team-building victory for the Patriots: they went into Buffalo, didn’t even need to throw the ball, dealt with the weather elements, and won.

The long-term impact of Belichick’s mind games is a legitimate aspect of the Pats’ victory.

Buffalo’s deteriorating psyche after the loss might end up being the most significant development (the Bills were extra feisty after the game with the media, even head coach Sean McDermott).

Although the Patriots’ unorthodox and downright demoralizing approach for Buffalo was the story, it wasn’t why the Pats won the game.

New England upset the Bills by passing the ball only three times because their defense had its best performance of the season against Buffalo.

The wind was a major factor in the Patriots’ strategy, but it wasn’t for the Bills, who attempted 30 passes with Josh Allen’s full complement of receivers and ran their typical passing game.

Buffalo tried running the ball against the Patriots, which was the mismatch we all expected (14% success rate) and forced the Bills to throw in poor conditions in long down and distances.

The Pats defense held Allen to 4.8 yards and -0.09 expected points added per attempt with a QBR of only 20.4 (out of 100). By games’ end, Belichick had Allen flummoxed: skittish in the pocket, prone to take off when his first read wasn’t there, and passing up open receivers to play backyard football.

As always, there were layers to Belichick’s game plan that involved pass rush and coverage.

First, the Pats’ rush plan on Allen was to force him as often as possible to step up in the pocket rather than extending plays by escaping to his left or right, where he’s most dangerous as a thrower.

Allen didn’t seem interested in stepping up into the interior of the pocket or keeping his eyes on his downfield reads, mainly because the Patriots were generating a push inside, but that’s his preferred playing style, and Belichick knew it. 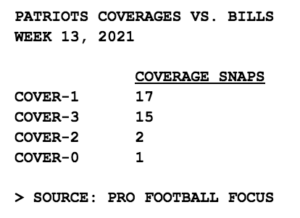 In all, Allen held the ball for 3.08 seconds on average and was under pressure on 32.7% of his drop-backs. While under pressure, Allen didn’t complete a pass on seven attempts and was sacked twice.

Although the Pats were in more man coverage this week, they still played over 50% of their coverage snaps in zone.

Due to the weather conditions, that meant primarily cover-three, so the defense had an extra defender in the box against the run. 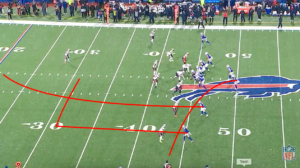 Buffalo offensive coordinator Brian Daboll tried to create openings in cover-three with middle read (dagger) concepts. Allen reads high to low, hoping the seam or crosser gets open deep or clears out the underneath for the dagger route.

Here’s a perfect example of the Pats marrying their rush and coverage against middle read.

The Patriots have Jalen Mills and Devin McCourty on either side of the vertical in the deep part of the field. Then, linebacker Jamie Collins drops underneath the deep dig route. Allen has nowhere to go with the ball, Kyle Van Noy and Matthew Judon keep him in the pocket, and he steps up into a Daniel Ekuale sack.

In this play, the middle read is more of a crosser from the outside receiver, and the Pats leverage it with the deep safety and Mills (bottom) on the deep third. Pats safety Adrian Phillips drops underneath the dig route with Collins, the Pats keep Allen in the pocket again, and he scrambles for a short gain.

When the Patriots played man coverage, they used their safeties to leverage crossers and spied Allen in the rush.

This time, Jalen Mills and Devin McCourty bracket number two (Sanders) in the right slot to take away the play at the sticks. In the rush, the Pats run a stunt with Christian Barmore and Dont’a Hightower to generate pressure with Van Noy popping out as an arm-side spy. Barmore gets home with the slap-rip move to register the QB hit, and Allen throws incomplete into coverage.

Here’s a rep of off-man coverage on third down where the Patriots use the post-safety to help on the inside crosser from number three, and Allen prematurely leaves the pocket. Van Noy is spying him in the middle of the defense, making Allen throw a contested pass.

After committing the numbers to coverage for most of the game, the Pats flawlessly executed a zero blitz on fourth down to ice the game.

In the play, there are multiple fantastic elements. First, the Bills initially have the all-out pressure blocked by only sending three receivers into the pattern, keeping in eight blockers. However, Devin McCourty makes a terrific split-second decision. When Dawson Knox, who McCourty has in man, stays into block, DMac rushes on a “green dog” blitz and is unblocked to Allen with the running back picking up the overload from the backside.

With McCourty hurrying the quarterback, DB Myles Bryant makes a terrific read to peel off Cole Beasley in man, who he has strapped, and get into the passing lane for the deeper in-breaker by the outside receiver. If Bryant doesn’t fall off Beasley into the window, Allen’s throw has a chance to hit Gabriel Davis for the go-ahead touchdown.

The Patriots’ defense put on a situational clinic by holding the Bills to one touchdown in four red-zone trips and 0-for-3 taking out the one-play drive following N’Keal Harry’s muffed punt.

If there’s one element to Monday night’s bizarre win for the Patriots, it was that their defense shut down Buffalo’s best shot offensively.

The Bills will argue that the windy conditions impacted their passing game negatively, and it was a factor, but Allen’s arm cannon threw the ball well even in the windstorm.

We’ll see how this matchup shakes out when these two teams play again in Week 16.

But unlike the Pats offense versus Buffalo’s defense, New England saw the Bills’ passing game against their defense and came out on top.