Lazar: the Patriots Offense is Working, Even if the Passing Game Remains Anemic 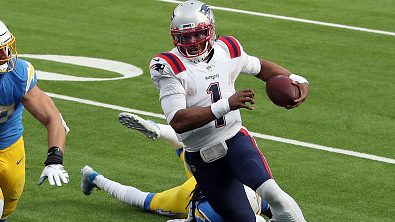 The Patriots offense led by quarterback Cam Newton looks unfamiliar to those that grew accustomed to seeing Tom Brady under center.

Brady was a precision passer, a master at processing defenses, and thrived on timing and accuracy to all three levels during his prime; things are different now, but not necessarily bad.

New England’s offense with Newton at the helm is far more run-centric and reliant on the quarterback’s legs, and although it has its issues, mainly through the air, it’s working.

Since Week 8, the Patriots offense is fifth in expected points added per play and yards per drive. Plus, they’re averaging 24.2 offensive points per game, eighth in the NFL over that span.

Although people harp on passing stats, Newton’s athleticism and ability to read defenses after the snap are significant contributors to how offensive coordinator Josh McDaniels is designing the offense. In fact, Cam is one of the only QBs that could make this strategy viable.

Not many offenses rank in the top five of anything positive over a six-game sample running the football as often as New England does, especially on first and second down.

This season, the Patriots are throwing the ball on 42% of their early-down plays, by far the league’s lowest rate, but they’re producing as one of the top rushing offenses in the NFL.

New England has the league’s top-ranked rushing offense in EPA per play, success rate, and fourth in Football Outsiders’ DVOA metric despite defenses loading up to stop the run.

Only the Cleveland Browns have more rush attempts against eight or more defenders in the box than the Patriots, but McDaniels is finding creative ways to keep his rushing attack moving by gaining a numbers advantage through scheme.

Again, Brady had his unique talents, while Newton has his, and McDaniels is designing schemes that play to the strengths of his current quarterback and roster.

After a 15-yard drive starter on a screen pass to running back Damien Harris, McDaniels surprised everyone when he motioned Newton out wide in a Wildcat formation. The Chargers’ response to Newton’s motion was to pull the weak-side linebacker out of the box to cover the flexed out quarterback. By snapping the ball directly to Harris, the Patriots turned an eight-man box into a more advantageous seven-man box while still keeping a lead-blocker in the backfield in fullback Jakob Johnson. The Pats then ran fullback lead ISO. Instead of following Johnson into the B-gap where the defense is flowing, Harris uses a double-team by center David Andrews and right guard Shaq Mason to gain eight yards through the A-Gap.

Following another eight-yard run on a draw play to Harris, the Pats get into some option football with Newton. With eight defenders in the box, using the quarterback as a run threat evens the offense’s blocking numbers.

Another element of the Patriots’ opening script was putting Chargers defensive end Joey Bosa in conflict. Bosa nearly wrecked the game for Buffalo the week before, so the Pats slowed him down by turning him into the “read” defender on option plays.

Here, New England runs a speed-option where Cam is reading Bosa. The Pats use an iteration of the Go-Go formation by stacking Johnson and Harris both on Newton’s right, which gives the fullback a shorter and better angle into his lead block. The “read” on Bosa also allows right tackle Michael Onwenu to put himself through to the second level, and when Bosa (circled above) crashes down to the quarterback, Cam flips the ball out to Harris with blockers in space.

On the next play, Newton gained 14 yards on a zone-read play. The Pats are blocking inside zone for the running back, leaving Bosa unblocked as the read man, and Newton dupes two Chargers with his fake at the mesh point, leaving the right sideline vacated.

“[Cam] is very good at that. We’ve used him for our defense to work on with teams that ran those types of plays, and he gave us a great look on that,” Patriots head coach Bill Belichick said.

“He is, he’s very patient with those plays and makes it really hard for the defenders to do anything – if they commit, then they commit wrong, and if they don’t commit, then it kind of keeps them out of position for the play that’s being run.”

With the Patriots driving, Belichick opted to go for it on fourth down from Los Angeles’s 12-yard line. The Pats ran a QB draw concept; a designed quarterback run for Newton where he has a lead blocker in Johnson. Harris’s release out of the backfield pulls two defenders with him, leaving a few options for Newton inside to pick up the first down.

Then, McDaniels went back to the Wildcat one more time, another designed quarterback run on the Patriots’ QB sweep play, and finally, Newton jumped over the goal-line for a touchdown.

New England’s TD drive to open Sunday’s game was a perfect summation of all the different running schemes in their repertoire, and again, many of them aren’t possible without Newton.

After throwing the kitchen sink at Los Angeles’s run defense, McDaniels had one more wrinkle up his sleeve in the second quarter; a two-back RPO package with Harris and Sony Michel.

On the play, the Pats run a trap scheme, with Newton having the option to throw the ball out to Harris on the bubble screen. Cam is reading the circled defender above, who stays back to defend the screen pass, and Michel goes for ten yards by following Thuney’s long trap block.

Patriots quarterback Cam Newton only threw for 69 yards on 19 attempts in a 45-0 victory over the Chargers, attempting only one pass of 20-plus air yards that fell incomplete.

Over the last two weeks, Newton has 153 passing yards on 37 attempts; in his 20 seasons with the Patriots, Tom Brady threw for over 150 yards in a quarter six times.

Still, New England’s current offense is effective, and McDaniels is slowly unveiling the wide berth of schemes available to him in traditional runs, read-option plays, and RPO designs.

There might come a time where Newton will need to produce more in the passing game. But the Patriots are scoring, moving the ball, and winning. At the end of the day, that’s the goal.

Now, continue reading for a few thoughts on New England’s defense as they shut down a prolific Chargers passing attack with a perfect marriage of pass-rush and coverage.

Although the pass-rush was terrific, the coaches film painted a fuller picture of a stellar coverage plan from Belichick that was executed flawlessly by New England’s secondary.

In the audio breakdown above, the Pats secondary gives us a graduate-level course on cover-7, a match-quarters coverage where the defense uses two deep safeties to bracket receivers and cut crossers. In this play, JC Jackson and Myles Bryant cut Mike Williams’s crosser while the McCourty twins bracket tight end Hunter Henry, leaving Herbet with nobody open, and he takes a sack.

Here’s another example of New England spinning the dial on Herbert. This time, they show the rookie QB a split-safety structure before the snap, then rotate into cover-three with a weak side rotation. The offense is trying to high-low the weak hook, but Jason McCourty spins into the crosser window, and when his first read isn’t open, the rush gets to Herbert.

In both examples, the Patriots’ pass rush ends the play, but it was the coverage in the backend that forced Hebret to hold the ball in the pocket.