Lazar: Thoughts on Every Position Group on the Patriots’ Initial 53-Man Roster 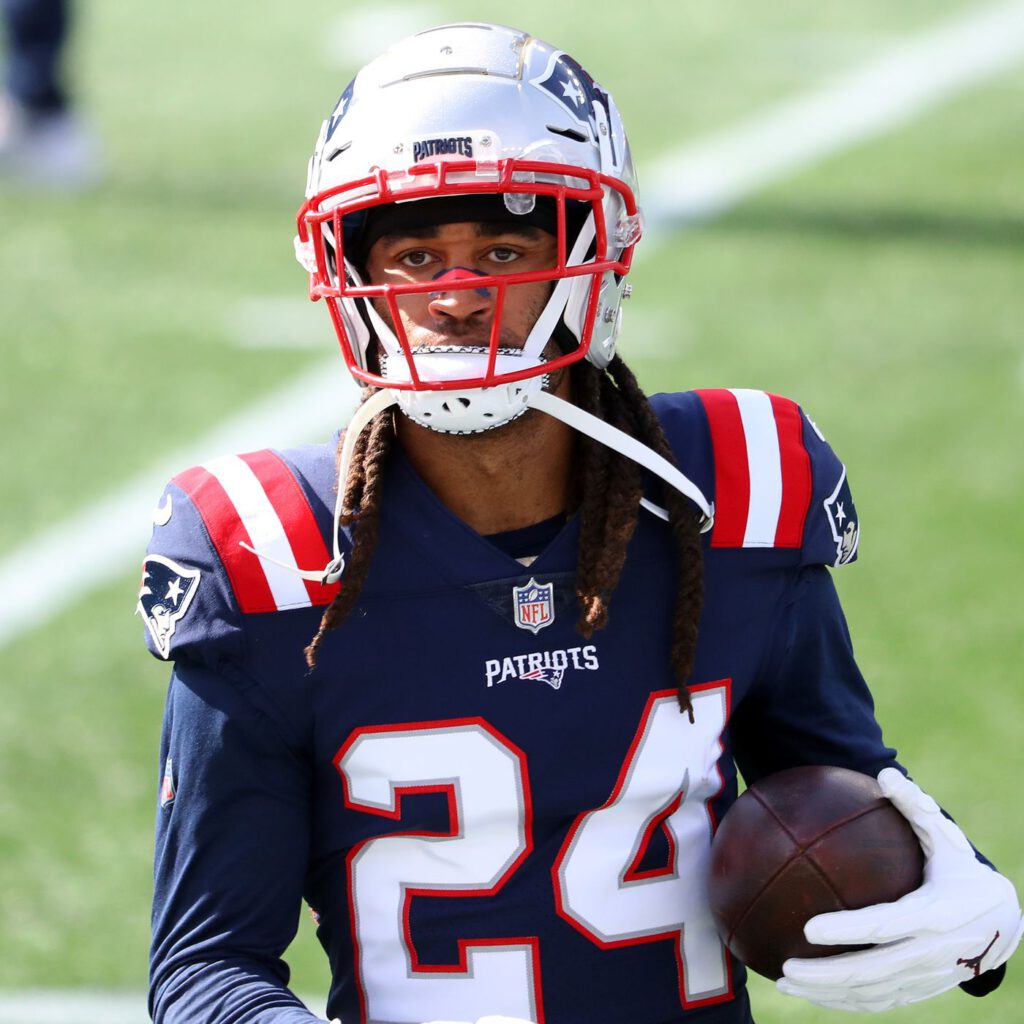 After a flurry of roster moves, the Patriots whittled down their team to the required 53 players by Tuesday’s 4 pm ET deadline.

The major surprise of the day was at the quarterback position, with former starter Cam Newton’s release paving the way for rookie Mac Jones to take over the helm in Foxboro.

Here is a look at the Patriots’ initial 53-man roster and a thought on each position group:

The Patriots stunned the entire NFL world by releasing veteran quarterback Cam Newton, handing the keys over to first-round pick Mac Jones, and opting to move on from Newton completely rather than holding onto him as a backup. For more on starting quarterback Mac Jones and the Newton release, read my review of the situation here. Another surprise at the position was the Pats initially waiving Hoyer. Although, the expectation is that the veteran backup will be back on the roster once the team frees up a spot. The move to release Hoyer was merely procedural to keep another rosterable player on the team. New England is comfortable with Jones and Hoyer making up their quarterback depth chart, but we wouldn’t rule out a third QB signing at some point.

The running back room took shape after former first-rounder Sony Michel was traded to the Rams last week. Bolden, who is still in a red non-contact jersey at practice, was the only potential cut in the same vein as Hoyer (initially released but eventually brought back). Instead, the Pats keep their depth with five running backs on the initial roster. Belichick often speaks about the 2018 season where the teams’ outstanding depth vanished, forcing the Patriots to convert wide receiver Cordarrelle Patterson to running back for a few games. Even with Taylor and Stevenson’s emergence, Bolden’s role as a core special teamer and reliable backup allows the Patriots to avoid another 2018 situation.

The only questions heading into cutdown day at wide receiver were how the team would treat N’Keal Harry’s health status and if camp darling Kristian Wilkerson did enough to make the team. Harry could still end up on injured reserve post-cutdown day, meaning he can return after three games. But his progress this summer has the team optimistic that he can contribute this year or play his way into a better trade market. As for Wilkerson, his early-summer success wasn’t enough for him to knock out Harry or Olszewski. Wilkerson runs dynamic routes with good inside-outside versatility. He can get open at the NFL level and is a potential core special teamer, but the drops were too much to overcome. Olszewski also struggled with drops in the preseason. Still, Gunner made enough progress as a receiver plus adds value as an All-Pro punt returner that the coaching staff remains patient with the DB convert. Wilkerson, Zuber, and Nixon are all potential practice squad candidates.

You didn’t expect Belichick to move on from the fullback position, did you? Neither did we. Fullback Jakob Johnson was a near-lock all summer. He’s a heavy-hitting lead blocker who does his job in the Patriots’ 21-personnel package. Johnson wasn’t going anywhere. Neither was second-year tight end Devin Asiasi, who flashed enough as a receiver in the spring and final preseason game to solidify his spot over veteran Matt LaCosse. Asiasi was much better in the spring before he was diagnosed with COVID-19, then started to turn it back on with a few camp practices under his belt. Asiasi has receiving talent and is a solid enough blocker. The tight end room is significantly better than it was the last two years.

As we know, the Patriots love carrying a huge OL room, and they’ll do it again to start this season. Other than trade acquisition Yasir Durant, Cajuste is the other offensive linemen that made the team at an “at large” spot. Cajuste’s foot speed and explosiveness allow him to slide with pass rushers and effectively work as a blocker in space. Cajuste hasn’t played an NFL regular-season game yet and has to fill out his frame to improve his overall play strength. Still, the 2019 third-rounder deserves a roster spot after a solid summer where he flashed his immense upside. The Patriots traded for Durant, an offensive tackle, during cutdown day.

Training camp standout Carl Davis makes the initial roster as the sixth interior defensive lineman. Davis is a strong two-gapper with good initial explosiveness out of his stance. With his size and athleticism, Davis fits the Patriots’ system well. Veteran free-agent addition Henry Anderson had an inconsistent summer, taking reps late into the fourth quarter of the preseason finale. Ultimately, the Pats trust in Anderson’s experience and versatility. Adams and Spence had some trade interest around the league, but nothing came to fruition on either front. Cowart, who didn’t practice all camp, could return after six weeks on reserve/PUP, while Thurman’s experience in the system makes him a good fit for the practice squad. New England’s depth on the defensive line stood out all August, and one would expect Adams and Spence to stick elsewhere if they don’t return to New England. They are both NFL players.

The Patriots stick with the known commodities on the edge, along with third-round pick Ronnie Perkins. Bower had a good camp and has a set of skills that fit the Pats’ system. Bower is a long, strong, and sturdy edge-setter who uses power rush moves to soften the edge to get to the quarterback. He’s not flashy but does a lot of the little things. Bower’s performance wasn’t enough to earn a roster spot with so many entrenched vets at the position, but if he clears waivers, expect him to re-sign with the practice squad as a depth option. Even though his fit in Bill Belichick’s defense isn’t perfect, Winovich was too talented to cut, and the Patriots haven’t seriously considered trading him yet. That possibility could present itself at some point, but, for now, Winovich has a key role player in the Pats’ pass-rush packages.

Our final 53-man roster projection predicted that second-year linebacker Anfernee Jennings would make the initial cutdown then move to injured reserve. Instead, the team opted to end his season as a part of the moves to get down to 53, opening the door for core special teamer and depth linebacker Harvey Langi to make the team. Langi takes over the role pegged for Raekwon McMillan, who was injured early in camp. Also, remember that Langi played meaningful defensive snaps for the Jets last season. He has NFL experience both as an inside linebacker and in the kicking game.

Another big shoe to drop for the Patriots on cutdown day was Stephon Gilmore landing on the reserve/PUP list. Gilmore will now need to sit out the first six weeks of the season. Gilmore’s injury rehab (quad) and contract dispute were factors in the PUP designation, leaving a hole at the outside corner spot opposite J.C. Jackson. Free-agent addition Jalen Mills will likely start on the outside with Jackson until Gilmore returns. Based on his camp performance and lack of success with the Eagles in that role, it’s worrisome that Mills will line up at boundary corner. He’s much better in a jack-of-all-trades role in the middle of the defense, but the Pats will need him to play cornerback. Third-year corner Joejuan Williams could also factor in there. Williams was better this summer than in his first two seasons. Still, he’s far from a difference-maker and is unproven as an NFL starter. The Patriots also lost a layer of depth at slot corner by releasing promising second-year DB Myles Bryant. You could list him at either corner or safety, and he has NFL-level coverage talent. Unfortunately, 5-foot-8, 180-pound frame had difficulty holding up as a nickel corner on the strong side of the formation. Regardless of his size, Bryant repped with the starters or top backups this summer, wearing multiple hats on the backend. Bryant’s release was a surprise given how well he played in his rookie season and his projected role. The team is hopeful that D’Angelo Ross, who stood out in the preseason finale, will make it to the practice squad as depth in the slot.

The Patriots are a little thin at safety on paper, but Mills will crossover into a safety role. Plus, it was a challenge in camp for Adrian Colbert or Myles Bryant (when he aligned at safety) to carve out legitimate playing time with the trio of safeties that made the roster eating up all the starter reps. Although we didn’t necessarily see it in camp, the Patriots are counting on a big year-two leap from Kyle Dugger. Dugger will match up on tight ends, play different zone coverage assignments, hang near the line of scrimmage to stop the run, and rush the passer. He’ll have a major role in this secondary at all three levels of the defense.

Leave it to Bill Belichick to find roster spots for all four special teams aces even on a loaded roster. The Patriots value special teams more than most teams. They also have core contributors in Brandon Bolden, Gunner Olszewski, Harvey Langi, Jonathan Jones, and Adrian Phillips. Belichick loads up once again on able bodies in the kicking game.

The last surprise on the Patriots’ initial 53-man roster is the team opting for undrafted rookie kicker Quinn Nordin over veteran Nick Folk. However, there are a lot of potential reasons for that decision. First, Folk’s injury could be a factor as the 36-year-old didn’t kick much this summer. Second, Nordin would’ve needed to pass through waivers if he was released, while Folk becomes a free agent. There was a good chance that Nordin would’ve gotten claimed on waivers by another team, which means the Pats would’ve lost him. It’s possible that Nordin could be trying out for the job on a long-term basis while Folk works his way back to full health. If Nordin struggles and Folk is healthy down the line, then the veteran could be back. The last possibility is obviously that Nordin won the job outright. He has a massive leg, but Nordin missed three extra points and two field goals in the preseason. The rookies’ inconsistent accuracy doesn’t jive with Belichick’s typical preferences at kicker. The Pats might want to work with Nordon to develop him as a long-term option, but it feels like he’ll have a very short leash in 2021.