Lazar: Tom Brady is Putting the “System QB” Label to Bed Once and For All 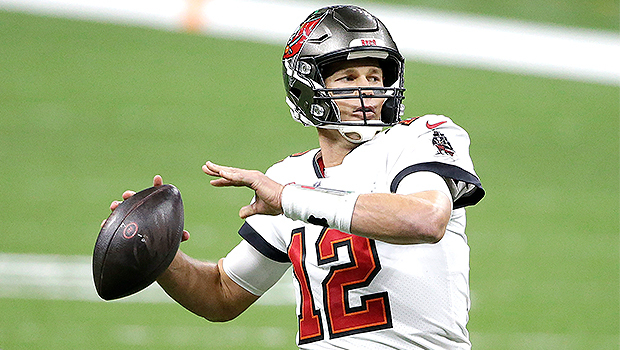 For those that can stomach watching Tom Brady on a different team, the Buccaneers’ victory over the Saints to reach Brady’s 14th conference championship game followed a familiar script.

Although it might be painful to watch him go on another playoff run in a different uniform, the one silver lining is that Brady is giving Pats fans even more ammo in the GOAT debate.

According to his detractors, one of the biggest criticisms of Brady’s epic career is that he was a “system quarterback” that often “dinked and dunked” his way to the Super Bowl every year.

Here in New England, we already knew those false narratives were foolish, but at 43 years old, Brady is leading the Buccaneers by having one of his best deep passing seasons on record.

Brady leads all quarterbacks with a career-high average air yards per attempt of 9.4, 45 big-time throws (also a career-high), and is second only to Aaron Rodgers in deep passing yards.

In comparison, Brady’s previous career-high came in his most recent MVP season when he averaged 9.0 air yards per attempt throwing to Brandin Cooks and Rob Gronkowski in 2017.

The former Patriots QB didn’t deliver an “A” performance against New Orleans. It was more like a solid C. He had two turnover worthy plays, one dropped interception, and only threw for six yards per attempt with an ironic 199 passing yards (Brady was picked no. 199 in the 2000 draft).

Still, he out-dueled Drew Brees and is thriving in a new passing system. Bucs head coach Bruce Arians is known for attacking defenses vertically, which is exactly what you see on tape.

On the first third down of the game, the Saints gave Brady a single-high safety, and the Bucs dialed up four verticals on third-and-3. Motioning Gronk into a condensed formation in the stack to Brady’s left gave the former Pats tight end space along the sideline to create a passing window on a fade pattern. The ball fell incomplete, but at that point, it was easy to see that things are different in Tampa.

Brady was only one-for-seven on passes of over 20 air yards as the Saints’ game plan was to eliminate shots down the field by the Bucs offense by playing predominantly two-high safeties.

Brady’s best throw of the game came on a 29-yarder to Scotty Miller. This time, a third-and-five, where the Bucs ran a double move to Miller. Miller motions across, and his defender follows, signaling to Brady that it’s man coverage. At the snap, the safeties rotate, with the deep safety to Miller’s side coming down into the hook/crosser window, leaving the deep responsibility to Marcus Williams on the far hash. Brady sees the coverage rotation and knows that Williams has a long way to go, so he hangs it up there for Miller. Although the ball looks underthrown, it’s thrown perfectly, as it protects Miller from a massive collision with Williams.

Early on, Brady unloaded another deep-ball dime that was dropped by wide receiver Chris Godwin in the end zone. It was a tough catch in Godwin’s defense, but it was catchable.

The Saints’ defense is once again in match-quarters coverage with two deep safeties. In the pocket, the Saints get home with a T/E stunt, but Brady recognizes the deep safety over Godwin taking Gronk’s route up the seam and drops a dime under pressure with the safety vacating the deep-half and Godwin gaining inside leverage on his man.

Brady is still processing coverage quickly and throwing darts on drive throws, along with an increase in deep throws.

Brady fumbles a bad snap in this play and still keeps the play on time. His first look is to tight end Cameron Brate on a crossing pattern. The Saints are in quarters coverage once again with the linebacker level dropping underneath Brate’s route and the deep safety matching him coming across the field (quarters safety takes #3 vertically). Brady comes off a covered Brate to his one-on-one matchup on a 12-yard comeback route to Antonio Brown and fires a far-harsh dart.

Here’s another example of a newish concept for Brady in the Bucs offense called “leak,” which is a popular play that is making the rounds throughout the NFL, especially in bootleg offenses.

New England is not big into bootlegs, and in studying their offense, I never charted them running anything that resembled the leak concept.

The idea of the design is to hide Chris Godwin’s vertical route in the flow of the blocking as the offense simulates a run with play action. Mike Evans clears out the sideline for Godwin, but the Saints defense stays on top of Godwin’s route, so Brady works back across the field to Brate’s crossing pattern and hits him for 19 yards.

After struggling with a lousy supporting cast in his final season with the Patriots, at least by his standards, Brady is having one of his best years aided by a much better group of receivers in Tampa.

Although it stings for Patriots fans, the drastic swing in production, which we knew he could do with better pass-catchers, is another feather in Brady’s cap.

Brady is proving he can play in any system, even one that forces him to lean on deep passes, and is back in a conference championship game without Bill Belichick’s help.