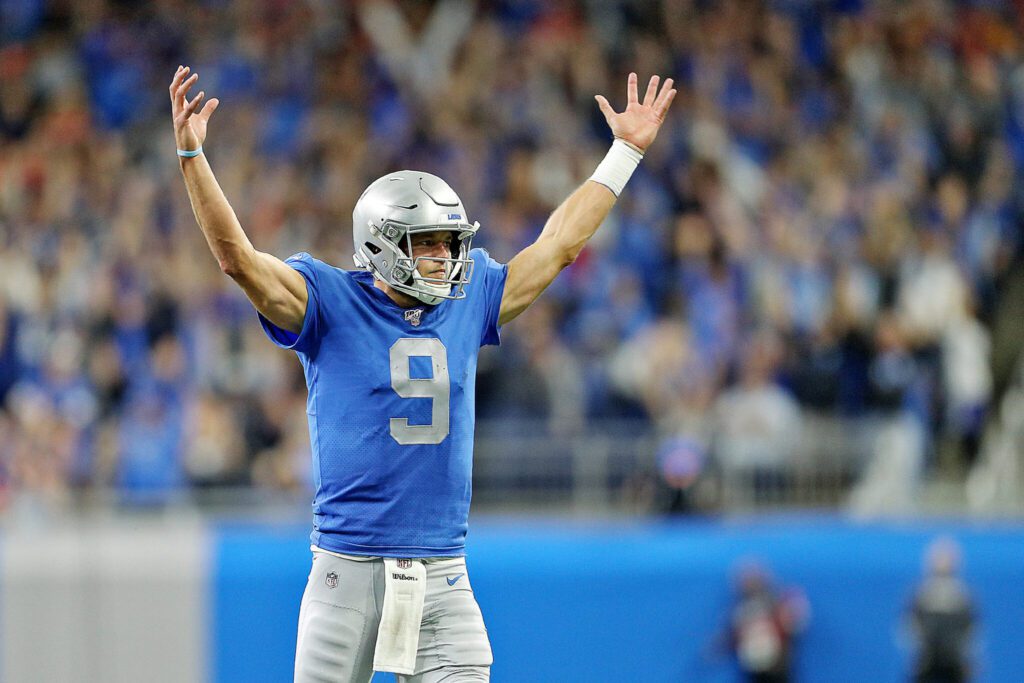 Detroit Lions quarterback Matthew Stafford (9) celebrates after a touchdown call stood after a review during their NFL game against the Kansas City Chiefs at Ford Field in Detroit, on Sunday, September 29, 2019. The Chiefs won the game, 34-30. (Mike Mulholland | MLive.com)
Share
Facebook Twitter Email

While the rest of New England is lamenting a former Patriots’ quarterback’s tenth trip to the Super Bowl, let’s hope that head coach Bill Belichick is planning his redemption tour in 2021.

Before Tom Brady led the Tampa Bay Buccaneers to the Super Bowl on Sunday, news broke that the Detroit Lions and quarterback Matthew Stafford are parting ways.

Stafford, who turns 33 years old next month, spent his first 12 seasons in Detroit after the Lions selected him first overall in the 2009 draft. In those 12 seasons, Stafford never won a playoff game in three postseason trips.

Although team success never followed Stafford in Detroit, it’s fair to say that the organization let the quarterback down more than his play on the field. The Lions fired their only coach with a winning record in the Stafford era (Jim Caldwell), hardly ever had a balanced roster, and drove superstar receiver Calvin Johnson into early retirement because of their team building failures.

Stafford is now the latest Lion to tap out of Detroit early, joining Johnson and Hall of Famer Barry Sanders, making a franchise quarterback on a team-friendly deal available for Belichick.

For the sake of longevity, favoring a quarterback in the draft on a rookie deal over Stafford is a fair stance if you believe the Patriots should enter a full rebuild after Brady’s departure.

However, at age 68, it’s also fair to wonder if Belichick wants to go through a multi-year rebuild at this stage of his career.

As we’ll outline below, Stafford’s talents and contract could open an immediate window for New England to contend next season:

STAFFORD IS A QUALITY STARTER

Most advanced metrics suggest that Stafford is an average NFL starter, but the eye test shows a quarterback capable of elite play that finished last season at a high level.

In 2020, Stafford was 15th in ESPN’s QBR metric and 13th in Pro Football Focus’s ranking while actually finishing in the same neighborhood as Cam Newton in EPA+CPOE composite (see chart above). However, those numbers don’t tell the full story with the Lions’ QB.

Stafford’s skill set that made him the top selection in 2009 hasn’t deteriorated all that much after a decade in the league. He’s had back issues of late but still has dominant physical tools.

The first things that stand out on tape with Stafford are his arm talent and mobility. Last season, he ranked second in passer rating on passes of 20-plus yards with seven touchdowns to zero interceptions. As the play above shows, he can avoid pressure in the pocket and drop a 50-yard dime with a flick of the wrist.

Stafford can reset while avoiding pressure and throw darts on drive throws when necessary too.

Then, he combines natural arm talent and throw power with anticipation to make in-rhythm passes. In this play, the play-action fake forces Bears linebacker Roquan Smith (no. 58) to use a “robot” technique where he turns his back to the QB to locate the route over the middle. Stafford knows he has Mohamed Sanu breaking inside on a dig pattern and releases the ball before Sanu clears Smith, knowing that the linebacker doesn’t have eyes on the ball. The pass is thrown in the perfect spot to avoid the coverage and lead Sanu into yards after the catch.

Possessing all the physical attributes to make the above throws are nice, but Stafford elevates his game by reading coverage at a high level and manipulating defenders out of passing lanes.

Here, the Bears defense rotates into an inverted cover-six structure. Stafford wants to work the “sit” route against zone coverage, but Roquan Smith is once again in the way. As he’s reading Smith make his drop, Stafford moves up in the pocket to buy himself time. He then throws a no-look pass that pulls Smith towards TJ Hockenson underneath and right out of the passing window for Danny Amendola’s route in the middle of the field.

No, Patrick Mahomes isn’t the only quarterback throwing no-look passes these days.

Along with constant eye manipulation, Stafford is a quick processor whose 2.46-second average time to throw was tenth among 32 starters despite having an average depth of target of 8.9 yards (fourth in NFL).

In this play, Stafford makes an accurate on-time throw on his second look in the progression. To his right, the Lions are running a “sail” concept against cover-three buzz (one-high safety rotation with a safety inserting into an underneath zone). The flat defender uses a perfect “sail” technique to fall underneath the corner route while still close enough to close on the flat route. However, Stafford sees Smith open towards the field in his drop and comes off the “sail” read to complete a pass to Marvin Jones on the backside of the formation.

Matthew Stafford taking the #Lions on a 96-yard TD drive against the #Bears in Week 13. He was 6-of-7 for all 96 yards including a 25-yard TD to Marvin Jones. pic.twitter.com/BU2d54ktqD

In the fourth quarter of the Lions’ win over the Bears in Week 13, Stafford capped off a 402-yard performance with a 96-yard touchdown drive to pull Detroit within a field goal (they’d take the lead following a Bears fumble).

Although all these clips are from one game, Chicago was eighth in Football Outsiders’ DVOA metric this past season, and plays like those are sprinkled all over Stafford’s 2020 film.

For those that took the time to examine the tape, there’s absolutely no doubt that Stafford is a borderline top-ten quarterback that is just praying to get traded to a winning organization.

The other myth you’ll hear about Stafford amid trade speculation is that his contract is too pricey for a team like the Patriots who have holes to fill besides quarterback.

Stafford’s deal is extremely team-friendly for the club acquiring him in a trade. He has cap hits of $20 million and $23 million over the next two seasons. In 2021, that’ll put Stafford around 16th among starting quarterbacks, a bargain, and it can easily become more affordable.

For example, a team can lower Stafford’s 2021 cap number by adding years onto his deal with an extension, which will probably make sense for both sides once a trade does go down.

Secondly, the Patriots will, conservatively, have $40 million in cap space to play with once they acquire Stafford if the league cap is $175 million.

We often hear reports on free-agent deals and shake our heads, “player X is signing a five-year, $80 million deal,” but the reported maximum value is not reflective of the players’ first-year cap hit. Why? Because teams can spread the salary across multiple seasons to maintain flexibility.

Let’s use Patriots cornerback Stephon Gilmore as an example since he signed the most lucrative free-agent deal ever under Belichick. Gilmore’s five-year, $65 million contract had an average annual value of $13 million. But the Pats structured the deal where his year-one cap hit was only around $8.6 million, much less than $65 million/five seasons.

Here’s a very rough estimate of how the Patriots could make significant additions at wide receiver, tight end, linebacker or defensive line, and still re-sign some of their key in-house free agents while Stafford is on the books for $20 million. It comes out to a little more than New England’s estimated salary cap space. But remember, that’s based on a $175 million league salary cap, doesn’t account for a Stafford extension, and the Pats can easily become cap compliant with a few moves (example: cutting Marcus Cannon frees up $7 million in cap space).

Although it’s unlikely that Belichick will go on the offseason spending spree outlined above, money is not an issue, and Stafford’s contract will not prevent them from making other moves.

The Patriots would still have plenty of wiggle room to make another “splash” in March, or hopefully, pair Stafford with one of the many free-agent wide receivers available this offseason.

CAN THE PATRIOTS MAKE THE BEST OFFER?

Now that we know Stafford is a legitimate quarterback target for the Patriots, the last piece of the puzzle is a trade framework.

The Patriots’ biggest obstacle with Stafford, or any available high-level starter, is that there is a slew of other teams that will be in the bidding for Stafford’s services.

Potentially among those teams are the Jets, Dolphins, Panthers, Broncos, and 49ers, who all have a higher first-round pick in the 2021 draft than the Patriots. The Jets and Dolphins probably have bigger aspirations, eying Deshaun Watson or one of the draft’s top QBs, but that also makes it less likely that one of the draft’s prizes falls to New England at 15. Even more reason to make the trade for Stafford.

Then, there’s a group of five teams after New England in the draft order that will be squarely in the hunt for upgrades at the position (Washington, Chicago, Indianapolis, New Orleans, Pittsburgh).

According to reports, it could take two first-round picks to land Stafford with three or four QB-needy teams expected to be in the mix. The Pats’ best asset, the 15th overall pick in the 2021 draft, is good but not great, so they’ll likely need to trade multiple picks for Stafford.

Will Belichick be willing to outbid a team like the 49ers, a great landing spot with a higher first-round pick, or avoid losing out on Stafford to an aggressive front office (like Indy or New Orleans)?

Only time will tell if the Pats’ football czar will give up the necessary resources to make a trade for Stafford, and Detroit may favor another trade package on the table anyway.

Still, for a team that should aggressively pursue upgrades all over its offense, Stafford makes sense from several different angles and would give the Patriots new life.