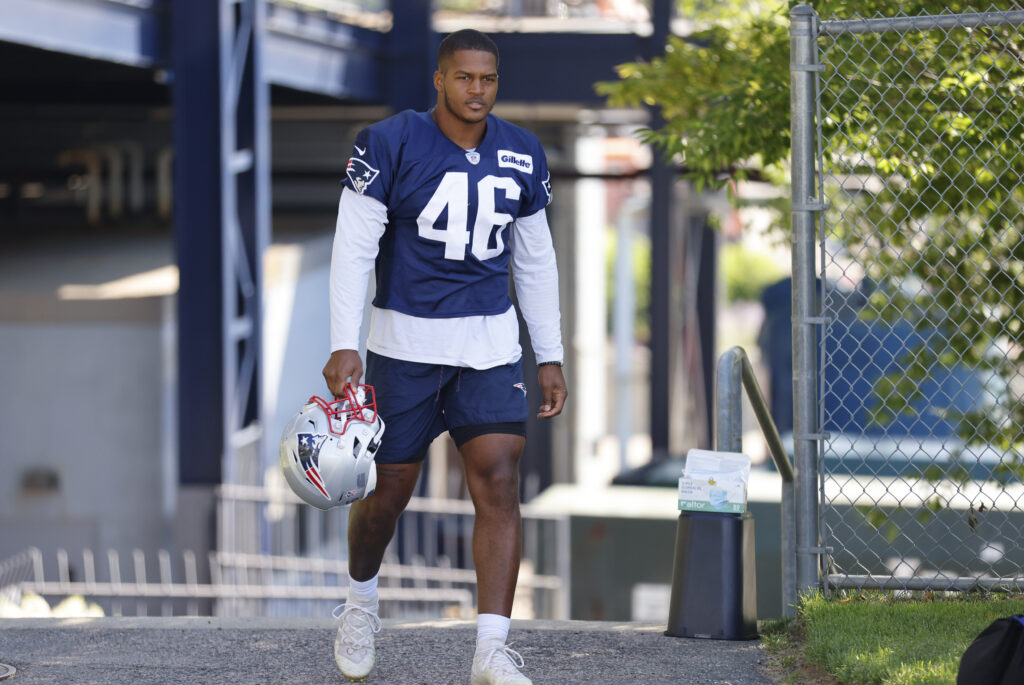 The Patriots held their first organized team activity practice down at Gillette Stadium with media in attendance on Monday.

Most of the major storylines were about New England’s re-worked offensive coaching staff, quarterback Mac Jones and veteran and rookie newcomers to the team.

However, an initial glimpse at the Patriots’ current roster also shed light on several intriguing roster and schematic developments.

Mainly, the Pats are shifting personnel along the offensive line and at linebacker, which could also bring on schematic adjustments to integrate new players.

Along the offensive line, first-rounder Cole Strange looks like a plug-and-play starter at left guard. Strange’s athleticism was already on display as New England drilled outside runs and play-action concepts with a Shanahan-style twist to practice.

Among the notable veteran absences was starting left tackle Isaiah Wynn, who is entering the final year of his rookie deal and is sitting out voluntary workouts for a second-straight spring.

After a slow start last season, Wynn’s decision to stay away this spring could be the beginning of the end of his time in New England.

The Pats are getting younger and faster at linebacker, looking to add more defensive speed at the second level. Schematically, that could lead to more even fronts (4-3) to keep those linebackers clean to make plays.

With change in the air in Foxboro, here are four under-the-radar players that are vying for roles this spring:

The Patriots ran practice with an offensive line featuring Trent Brown (left) and Justin Herron (right) at tackle. Although he was much better on the left side, Herron was a reliable backup last season, playing on 37.8% of the snaps. Herron has good movement skills, clean pass sets, and would fit as a more athletic tackle in a zone-based running system. New England knows what it can get from a motivated Trent Brown at left tackle, while more reps on the right side next to Mike Onwenu could make him a more consistent option there. If Herron has a strong summer once the pads go on, he could make Wynn expendable if the team wants to move on earlier than expected. Internally, the Patriots weren’t thrilled with Wynn showing up for camp out of shape last summer, culminating in a rocky start to the 2021 season. Wynn is walking a thin line and is creeping up the surprise trade candidates list.

The Patriots were thrilled with McMillan before he tore his ACL last summer in the second week of camp. Despite the injury, McMillan signed a one-year extension to continue with the Pats in 2022. If he stayed healthy a year ago, there’s a very good chance McMillan would’ve carved out a role as a coverage linebacker in obvious passing situations while also serving as a core special-teamer. In fact, one team source said that the Pats would’ve rolled with a healthy McMillan over re-signing Jamie Collins. Fast-forward a year, McMillan is picking up right where he left off, adding athleticism in coverage for the Pats linebackers. McMillan is squarely in the mix and could even blossom into a leader in a revamped linebacker room.

With James White still recovering from hip surgery, Montgomery played a prominent role in a pass-heavy practice by catching passes out of the backfield. He also worked with the wide receivers during drills and looked smooth as a check-down option on New England’s movement play-action concepts. Montgomery was at his best as a pass-catching running back for the Packers and Saints, with some overlap in the running back route tree in New Orleans. The Raiders and Josh McDaniels took New England’s insurance policy for James White, Brandon Bolden, to Vegas. Montgomery could be the new Bolden.

We haven’t forgotten about Ernie Adams’s final draft choice with the Patriots. Heading into year two, Nixon is on a nice trajectory as he develops into a speed slot role rather than playing on the outside. His sudden burst and quickness through the break point made for some easy completions over the middle during team drills. In all, Nixon caught all four of his targets and ran a smooth in-breaking route to catch a pass in-stride from rookie Bailey Zappe. The Pats suddenly have a crowded receiver room, but they might have something there if Nixon can continue making plays when the contact ramps up.