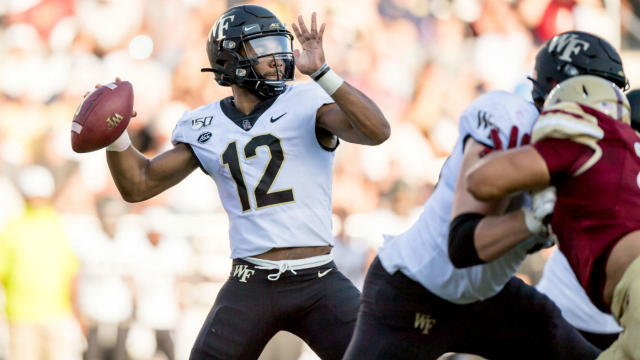 As we make the final turn towards the 2021 NFL Draft, the growing consensus is that the second-tier quarterback market is barren.

ESPN’s Mel Kiper recently said that if a QB-needy team doesn’t select one of the top five quarterbacks, they should look to the 2022 draft.

One of the reasons why the day two and three quarterbacks are leaving a lot to be desired is that Wake Forest transfer Jamie Newman opted out of the 2020 season due to the pandemic.

After three seasons at Wake Forest, Newman transferred to Georgia, where he was projected to start. However, he opted out, and there were mixed reactions about the decision, which is not surprising given the stakes in Athens.

Newman decided to sit out the year after over 800 students at Georgia tested positive for COVID-19. But doubters thought that the prized transfer sat out the year because fellow transferee J.T. Daniels, a former USC quarterback, beat him out for the job.

Regardless, that was Newman’s decision, and his choice sent a ripple effect through the 2021 draft because one of the best up-and-coming prospects was no longer taking part in the season.

In 2019, Newman’s tape was extremely impressive in an offense that didn’t make it easy on him and he added 574 rushing yards and six rushing touchdowns.

Out of Pro Football Focus’s top seven quarterbacks in the 2021 NFL Draft, Newman attempted the highest percentage of tight-window throws by a substantial margin (53.2%) and had the second-highest passing grade on tight-window passes in the nation behind only Joe Burrow.

Furthermore, Newman’s 96.5 grade on throws over 20 yards was also second to the eventual number one overall pick in the 2020 draft, and his arm talent jumps out at you immediately.

Newman’s downfield throws and poise in the pocket offer a solid foundation for a team looking for a mid-round project, as does his athleticism as a runner and play creator.

Hopefully, the Patriots will be in the market for an elite quarterback prospect in the first round, but Newman is a strong candidate to learn behind Cam Newton if those plans go awry.

Along with his arm talent and mobility, Newman’s best quality is his immunity to pressure. He’s simply unphased by pressure and completed a solid 48.7 percent of his under-pressure attempts.

Above, Newman’s left guard gets beat immediately, and he’s pressured up the middle. Recognizing that it’s one-on-one on the outside, Newman side-steps the pressure and gives himself enough breathing room to drop a dime for a third-down conversion.

Here’s another instance where Newman’s right tackle allows a rusher to cross-face, and there’s an unblocked blitzer. Neither defender spooks Newman, and he hits his receiver coming over the middle.

In this last example, Wake Forest is running an outside zone play-action scheme on the goal line. Knowing his offensive line is going to the outside zone step to his left, Newman can anticipate that the player on the end of the line to his left will be unblocked. He does just that and uses his legs to roll out of the pressure and dump the ball off to the “slide” route for an easy touchdown.

Although Wake Forest’s passing system wasn’t very NFL-like, there were instances where Newman made it through full-field progressions and found the open receiver.

The Demon Deacons ran an offense that had tons of RPO and one-read passing concepts, so there will be a learning curve for Newman when the NFL puts more on his plate.

For example, here’s a typical deep-shot opportunity for Newman. Wake isolates the slot receiver, and it’s essentially a one-route read for the quarterback. Yes, there are three receivers in the pattern, but the two hitches on the outside are window dressing to space the field. The read is the slot fade, and Newman makes a terrific throw for a touchdown, but the NFL hardly ever has passing concepts that simple.

Still, there’s evidence that he has the abilities necessary to operate a more pro-style scheme.

Above, Newman gets to his third option in the progression. First, he looks to make a leverage throw on a deep out to the left sideline, but his receiver is covered. Then, he works to a levels concept over the middle. The shorter in-breaking route takes the middle-hook defender with him, opening a passing window to the second in-breaking route, and Newman rips it for a 17-yard completion on third-and-15.

There are also instances where Newman shows the ability to manipulate coverage downfield.

Here, Newman opens towards the sideline and gets the linebacker matching his tight end to shade over to the quarterback’s left. Then, Newman comes back to the tight end on the sit route over the middle for a completion.

Newman also has some mechanical issues to work out to become a more consistent downfield passer. According to SportSource analytics, 27.5 percent of Newman’s throws were inaccurate in 2019, 155th in the country.

On the 17-yard completion, you’ll notice that the ball is high, and that was an issue for Newman as 28.6 percent of Newman’s incompletions were overthrown. The ball sails on Newman because his front leg locks straight, which causes the ball to come out early and Newman to lose control of his back foot.

Another common problem that led to Newman’s incompletions was an early-opening front hip that led to balls in the dirt. In this example, Newman’s front foot points to the sideline rather than his intended target, opening his lead hip, and it causes him to yank the ball into the ground.

The first time through Newman’s tape gave me reservations due to the limited scope of Wake Forest’s offense and Newman’s inconsistent throwing mechanics that led to accuracy issues.

But if the Patriots go the project route at quarterback, taking a flier in the middle rounds on a prospect like Newman has the highest chance of success, even if the odds are inherently low.

If Newman started at Georgia last season, his stock would undoubtedly be higher than it is now, and he has the talent to develop into a starter.