As the Patriots embark on an offseason where finding offensive firepower is a top priority, Bill Belichick and offensive coordinator Josh McDaniels need to have a philosophical discussion.

Before they can decide on a quarterback or receivers to target come March, the Patriots need to do some soul-searching and self-scouting to determine what kind of offense they want to run.

With Tom Brady under center for 20 seasons, New England’s foundation stayed the same while morphing year-to-year and week-to-week based on its personnel and opponent.

Brady was a quarterback chameleon, allowing the scheme to shift personnel groupings and its point of attack to amplify the best skill players surrounding the greatest quarterback of all-time.

“So, I think over the years, the experience that we’ve had has been helpful to transition our offense to the skillset of the players. I think that’s what good teams do. You know, you’re not going to be able to replace this player for that guy. It’s hard to replace a Randy Moss. It’s hard to replace a Rob Gronkowski, so you’ve just got to morph the offense and try different things and see what works.”

Brady’s sentiment that good teams adapt to their personnel is true, but what happens when the quarterback is new and playing in the system for the first time? Like Moss or Gronk, there’s no replacing Tom Brady.

Due to Brady’s extensive knowledge of the offense, New England ran a passing system with several different pre and post-snap adjustments or options for quarterback and receiver. 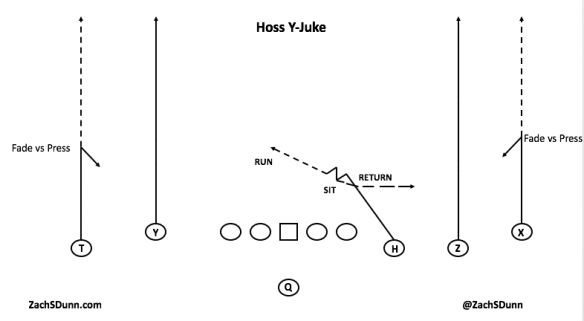 For instance, one of the Patriots’ go-to play-calls over the years, especially once they shifted to a tight end and slot receiver-heavy attack, was the legendary HOSS Z (or Y) Juke.

The play originated with Hernandez, or the Y tight end, running the juke series. Then later shifted towards the “Z” receiver, Wes Welker or Julian Edelman, running the inside option route.

HOSS works against any coverage. But it’s on the QB to read the defense, know how the five eligible receivers convert their routes based on the coverage and find the best option. Quickly.

Current Pats quarterback Cam Newton spoke at length this season about his struggles with one of the most sophisticated playbooks in football, saying he was hesitating due to overthinking.

McDaniels’s adjustment to help Newton was to strip the offense of its full-field reads and optionality, noticeably affecting its potency.

Suppose the Patriots want to run an offense that relies on a supercomputer at quarterback reading out coverages and route adjustments rapidly. In that case, it’s going to be difficult to find that.

Sure, Belichick and McDaniels could search for Brady-lite, which many in the building thought they had with Jimmy Garoppolo, for example, but there’s still only one Tom Brady.

And even if the quarterback gets it, do the receivers understand their jobs? Many veteran and rookie receivers alike have struggled to adapt to the Patriots’ playbook.

Although finding Brady-lite is one option, it’s a tall order to expect any quarterback, especially a first-year player, to succeed in a passing system that is overly complex even for veterans.

Another path the Patriots could go down is making the offense more quarterback friendly, which would lessen the burden on the next guy while also adapting the scheme to today’s players.

The idea here isn’t to discredit Josh McDaniels’s ability to adapt but instead offer some insight into ways the Patriots could modify their scheme this offseason to fit a non-Brady quarterback.

With Newton at quarterback, McDaniels dipped his toes in the option waters this past season.

The Patriots ran a designed quarterback run or read-option on 26.5% of their plays, fourth-most in the NFL, but the schemes were somewhat vanilla and didn’t involve many run-pass options.

Newton only ran 36 run-pass options, tied for 13th in the league, and just 13 of those converted to passes with an average gain of 4.02 yards.

Furthermore, the Patriots only motioned or shifted on 46.1% of their option plays, which was 21st and paled in comparison to league-leading Baltimore (79%).

Without much motion or a passing threat, New England didn’t take full-advantage of Newton’s threat as a runner, and their play-calls became downright predictable at times.

In McDaniels’s defense, Newton officially signed with the team in early July during a pandemic season with a shortened training camp and zero preseason games.

Due to those factors, it’s hard to blame the Pats’ OC for rolling out a basic option package with such little time and practice.

Some of the schemes McDaniels installed were good, such as the variation of the “GoGo” offense above where the Pats use fullback Jakob Johnson as a lead-blocker on speed option.

Other times, the Patriots ran rudimentary quarterback runs without motion or lead blockers, and those schemes predictably went nowhere.

The Ravens and Cardinals are at the forefront of bringing running elements of the college game, like option plays, to the NFL and are an excellent place to steal ideas from for the Patriots.

Things like Baltimore’s arc blocks and escort motions would need to become staples of the scheme. Arizona head coach Kliff Kinsbury also uses different ways to add on lead blockers, mostly with his tight ends in the running game, which helps both the backs and quarterback Kyler Murray.

Another offensive innovator that is buying into option schemes is Chiefs head coach Andy Reid and offensive coordinator Eric Bieniemy.

ridiculous that this opening play from the Chiefs was an RPO pic.twitter.com/0Aj2oMpd17

Chiefs quarterback Patrick Mahomes ran the third-most RPOs in 2020, only behind Jackson and Murray, and Kansas City averaged nearly eight yards per play on run-pass options.

Although it’s impossible to replicate the Chiefs’ speed, Andy Reid and Bieniemy incorporate variations of four verticals and other deep passing combinations from spread formations.

Most of the teams mentioned also integrate empty formations to give quarterbacks high-percentage throws.

Both quarterbacks and receivers are trickling up to the pros while playing in college systems that resemble Baltimore, Arizona, Kansas City, and other NFL teams on the trend.

If the Patriots want to continue down the road with Newton or another dual-threat quarterback, they need to build on their option elements in the playbook.

The Packers (Matt LaFleur), Titans (Arthur Smith), Browns (Kevin Stefanski), and most recently the Bears (Nagy) are also using the system that The Athletic’s Ted Nguyen called “the most QB-friendly in the NFL.”

The Shanahan/McVay system has helped mask the weaknesses of a long list of physically underwhelming quarterbacks around the league but with Rodgers, it’s accentuating his strengths. https://t.co/iBWd9ZZ4jR

Nguyen wrote an excellent breakdown that describes what makes the system, which marries outside zone rushes with nearly identical blocking on play-action passes, so successful.

In short, the heavy emphasis on play-action and bootleg-action presents the quarterback with defined reads using mostly crossers, routes in the flats, or levels-style concepts.

Aaron Rodgers is having an MVP season by putting an elite quarterback in an easy offense for the 16-year vet in Green Bay. Other teams such as the Rams (Goff), Niners (Garoppolo), and even the Bears (Trubisky) are propping lesser quarterbacks up by putting them in this system.

The Patriots, on the other hand, barely touch the Shanahan coaching trees’ philosophies.

New England only dialed up outside zone on 12% of their running plays, 28th in the NFL, while Newton only attempted 12 passes this season where a bootleg or moving pocket was involved.

Among 39 quarterbacks, Newton’s play-action percentage of 33.8% was sixth, but his 83.1 passer rating was 34th among qualified passers.

The Patriots’ struggles on play-action passes aren’t only on the scheme, and they were a fantastic play-action passing attack in their current offense with Brady at quarterback.

But simplifying things for a younger or lesser quarterback while remaining effective is a must, and that proved to be a difficult this season with Newton.

New England has three options: 1. search for Brady-lite 2. continue building with Newton and a young dual-threat quarterback or 3. make the offense easier for the quarterback in a Shanahan/McVay-style scheme.

Tom Brady is gone, and expecting whoever is under center in the future to run the offense in the same vein is an unfair expectation.

Bill Belichick on Kraft Draft Criticism & Trading up for a Quarterback

Lazar: How Will the Patriots Replace Julian Edelman?