Lazar: What’s Next For Patriots Defense With J.C. Jackson Heading to the Chargers?

The former Patriots corner signed a five-year deal with the Los Angeles Chargers. 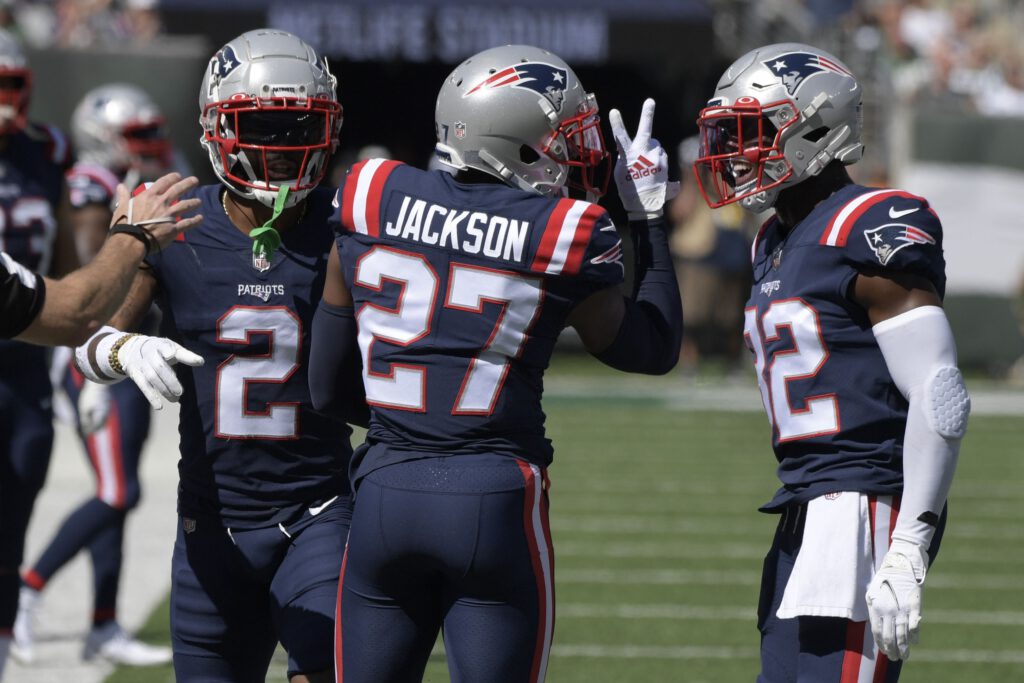 The Patriots got the news we were expecting on the first day of the legal tampering period; former Patriots cornerback J.C. Jackson is now a Los Angeles Charger.

Jackson received a five-year deal worth up to $82.5 million from Los Angeles with $40 million in guarantees and a $26 million signing bonus. Mr. INT’s new deal pays the 2021 Pro Bowler $40 million in his first two seasons and $54 million by year three. A bag, indeed.

According to a league source, Bill Belichick’s offer to Jackson, which Jackson himself confirmed came right before the NFL scouting combine in early March, wasn’t nearly as lucrative.

On the surface, it looks like the Pats weren’t that far behind in average annual salary. But the Chargers committed to Jackson for two more seasons upping the total value by over $30 million and guaranteed significantly more cash in Jackson’s pocket in the first three seasons.

New England’s offer isn’t comparable to the deal Jackson received from the Chargers, which the two sides knew when we reported last week that the Pats and Jackson were “never close” to an agreement.

The second-guess for Bill Belichick’s crew here isn’t that the Patriots weren’t willing to match Los Angeles’ offer. Instead, the lack of foresight is what could potentially haunt New England.

Despite a desire to rebuild their front seven and search for a number one weapon offensively, Belichick opted against the franchise tag with Jackson, opening another major void on his defense.

The Patriots now find themselves without an in-house replacement for their departed Pro Bowl corner and staring at a defensive depth chart with several holes, while the team still wants to add a wide receiver.

Now, the Pats need to invest premium resources into replacing Jackson immediately, a problem they could’ve addressed over two offseasons if they had Jackson for one more year on the tag.

New England could’ve developed Jackson’s replacement while still having him rostered, buying time to find better options to take over the mantle in 2023 when Jackson walked. In many ways, a similar model to how they passed the torch from Stephon Gilmore to Jackson a year ago.

The immediacy of Jackson’s departure means that Bill Belichick has a lot of work to do. So where does the Pats’ head coach go from here?

A SHIFT TO MORE ZONE COVERAGE?

Without Jackson or another elite cover talent to shadow number one receivers, some have theorized that New England could shift to more zone coverage in 2022.

Last season, the Patriots were already more zone-heavy than previous years, especially during their seven-game win streak and after a season-ending injury to top slot corner Jonathan Jones.

According to Pro Football Focus, the Patriots played zone coverage on 48% of their coverage snaps last season. They were rolling in the middle portion of the season using zone structures against quarterbacks who were puzzled by their post-snap coverage rotations.

Plus, there’s a trend against the AFC’s top QBs, such as Patrick Mahomes, Josh Allen, and now Russell Wilson, to more two-high shells and drop-eight schemes.

Bengals go to another drop 8 coverage with Sam Hubbard getting in the passing window. Once Mahomes tries to run around and make something happen, Hubbard triggers and comes away with a strip sack. pic.twitter.com/56hIfScjU4

In drop eight, which the Bengals used to stifle Mahomes and the Chiefs in the 2021 AFC Championship Game, Cincinnati deployed three-man rushes to have substantial numbers in the secondary to aid their corners with multiple help defenders, making it easier to cover KC’s weapons.

However, Patriots defensive play-caller Steve Belichick pushed back on a defensive philosophy change when he told CLNS Media last season, “we’ve always been a ‘man’ team. Everybody around here likes to play man coverage.”

Although it’s hard to believe that a notoriously man-coverage heavy system would major in zone, the Patriots might need to shift out of necessity due to lacking man coverage talent.

VETERAN CORNERBACKS STILL ON THE MARKET

Since the Patriots knew they were likely out on Jackson heading into free agency, Belichick’s staff pivoted to doing their homework on the other veteran corners on the free-agent market.

At this stage, it’s unclear if the Pats remain in these markets, but sources said before the start of the legal tampering period that New England inquired on former Rams corner Darious Williams. Others tied the Patriots to vets Steven Nelson, Kyle Fuller, Rasul Douglas, and trade candidate James Bradberry.

Williams is the most in-his-prime candidate on our short list, with a long-shot in Charvarious Ward as another potential free agent to monitor who will come in a tier below Jackson and Bucs CB Carlton Davis. On the other hand, the next group listed above are more one-year stopgaps.

Ultimately, New England will need to usher in a long-term replacement for Jackson, but they’re thin at outside corner and could use another serviceable veteran to fill some gaps.

Most Patriots fans would’ve preferred the team to target a premier pass-catcher or impact front-seven defender in the first round of April’s draft. However, corner is now a significant area of need.

Above is our current rankings of the top corners in the 2022 NFL Draft that should be on the board when New England selects at No. 21. LSU’s Derek Stingley and Cincinnati’s Ahmad Garner are absent because they’re top-20 locks at the top of the draft.

If we were to put on our Belichick hat to make an educated guess at the most likely target, it would be University of Florida standout Kaiir Elam.

On top of his 4.39-second 40-yard dash, the Gators run a man-heavy defense, while Elam is battle tested against the premier wideouts in the SEC. Projections now have Elam slated as a late first-round pick after helping his stock in Indy.

The absolute worst-case scenario heading into year two of the Patriots’ rebuild and the Mac Jones era is to revert to the secondaries we saw in New England from 2008-2011.

After Asante Samuel’s departure, it wasn’t until Belichick traded for Aqib Talib at the 2012 trade deadline that the Patriots had a Pro Bowl-caliber corner at the top of the depth chart. The Pats defense was 26th, 18th, 22nd, and 31st in pass DVOA until Talib turned the secondary around.

Following a forgettable four-year stretch, the Patriots passed the torch from Talib to Darrelle Revis to Malcolm Butler to Stephon Gilmore to Jackson. And all six of their Super Bowl championships came with a lockdown corner on defense (Ty Law x3, Revis, Butler, Gilmore).

New England blew a chance to have a smooth transition from Jackson to the next guy, making Bill Belichick’s next steps to recover from Jackson’s departure pivotal.