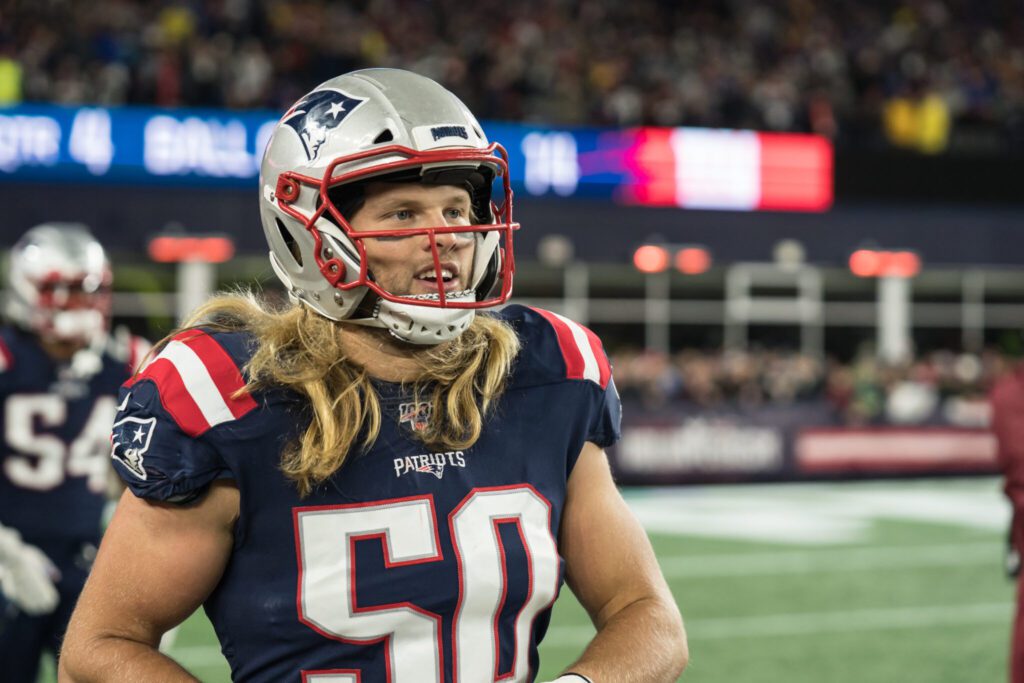 Patriots edge defender Chase Winovich was off to an excellent start in his second season, which makes his lack of playing time recently all the more peculiar.

Winovich, who hasn’t appeared on the injury report, went from playing 65.7 percent of New England’s defensive snaps to only 27.1 percent in New England’s last two games, both losses.

The 2019 third-round pick was tied for third among all edge defenders in Pro Football Focus’s pass-rush win rate metric with Browns star Myles Garrett after the first month of the season.

Winovich leads the Patriots with 17 quarterback pressures this season and ranks fourth on the team with eight run-stops despite a limited role against the run of late.

In the first month of the season, the former Michigan star was starting to stand out as a run defender, with Patriots head coach Bill Belichick taking notice.

At the beginning of the season, Belichick spoke about Winovich’s continued development into a three-down, really four-down, player, including special teams.

“Chase has done a good job for us on all downs,” Belichick said earlier this season. “I would expect him to be out on the field a good part of the time in all games.”

If Belichick thought that in September, why the sudden change to pull one of their most encouraging young players off the field?

This week, we spoke with both Bill and Steve Belichick, with the latter serving as Winovich’s position coach (outside linebackers).

The elder Belichick told CLNS Media that Winovich’s role wasn’t reduced due to poor play and deflected to a team-oriented answer when asked about Wino’s early-down performance.

Winovich, at this stage, is still a big piece in New England’s pass-rushing packages but is playing less in early-down run situations.

“No, I think he’s been the same player. Some of it’s situational and game plan and the way things worked out the last two games, but he’s a good player for us, and he’ll continue to play,” Belichick said.

Belichick also very matter-of-factly answered “no” to Winovich’s penalty for an illegal blindside block on 49ers quarterback Jimmy Garoppolo effecting his playing time. Belichick and Winovich had a long conversation following the flag where the head coach didn’t seem too pleased with his young linebacker.

After playing 12 snaps in the first half against San Francisco, Winovich only played one snap in the second half. His penalty came at the end of the first quarter.

Along with the penalty, the Patriots played the fourth snap of Sunday’s loss to the 49ers with only ten men on the field. Following the play, a seven-yard gain on first down, Winovich ran on as the 11th man in the package for second down.

A substitution error like that could be on the coaches or the player, but the other ten men got the message, with only Winovich missing from the grouping.

Still, one or two brain farts isn’t a good enough reason to bench a talented player right? Right, according to his position coach.

Patriots outside linebackers coach Steve Belichick also pointed to the game-plan saying, “every game plan is different. Every opponent is different. We just try to do the best we can putting guys in roles to succeed. You never know how the week is going to play out.”

Taking the Belichick’s at face value, penalties, nor poor substituting, or even poor play, was to blame for Winovich’s low snap count. Instead, it was about putting players in positions to succeed, as it always is with the Patriots.

After reviewing Winovich’s snaps in the last two games, it’s hard to find egregious errors that would explain a player with his potential getting benched, especially given the replacements. Plus, Belichick said it wasn’t related to his level of play.

There was some evidence of how the Patriots view Winovich currently, which might explain why he’s being reduced to his role as a pass-rush specialist from his rookie season.

Due to depleted depth, the Pats found themselves short 3-4 defensive ends that can hold up against the run, which became an issue against Denver and San Francisco.

At 250 pounds, the Patriots tried Winovich as a five-technique defensive end (circled above) on a few plays, instead of his usual spot as a standup outside linebacker.

To avoid getting blown off the ball, the Pats had Winovich be a one-gap penetrator rather than their typical two-gapping strategy, which led to breakdowns.

Here, Winovich is playing as a standup five-technique and tries to shoot the B-gap to get some interior penetration. The Broncos ran G/TE counter at Winovich and New England’s smaller run-stoppers. With Wino shooting his gap, he gets easily washed out of the play, and Phillip Lindsay gains 20 yards.

Following a poor 40.4 PFF run-defense grade in ten snaps in Week 6, Winovich only played two of a possible 37 running plays against the Niners

The 49ers also successfully attacked the edges with pre-snap motion and “tap” passes in their win over the Pats last Sunday.

On one of those plays, Winovich got caught in no man’s land between the motion and Garoppolo. The Patriots are in zone coverage with safety Adrian Phillips responsible for Deebo Samuel in the flat, so the motion man isn’t Winovich’s responsibility. Still, he either needs to affect the quarterback or the receiver and does neither, and when Phillips is blocked downfield on the motion screen, Samuel picks up 23 yards.

In the second half against the Niners, the Patriots shifted to more 4-3 fronts on early downs to stop San Francisco’s potent rushing attack, and Winovich wasn’t in those packages.

Instead, the Pats used practice squad call-up Tashawn Bower and John Simon as a defensive ends with rookie linebacker Anfernee Jennings off the ball alongside Ja’Whaun Bentley. To combat motion, New England also put Phillips on the line of scrimmage to give them more speed on the edge.

Winovich could line up in place of Bower, but Simon sets a sturdier edge on the strong side of the formation and Wino doesn’t play off the line. His lone snap of the second half came late in the fourth quarter on a 3rd-and-7, a pass-rushing situation.

Although its about outside the box, Winovich either needs to be sturdier against the run or learn to play off the ball to carve out an early-down role.

The Patriots were hopeful that Winovich was developing into an every-down player that would hold up regardless of situation or matchup at edge defender.

For example, free-agent departure Kyle Van Noy, who played a role that many pegged for Winovich down the road, was on the field for 86.5 percent of snaps in 2019. Winovich is only in his second season, but an uptick in snaps was the expectation.

Sure, the team might’ve wanted to see Tashawn Bower in game action during a blowout, but viewing him as a potentially more dependable option against the run isn’t a great sign for Winovich.

As the season progresses, Belichick appears to be pulling back on Winovich’s role, which indicates that he still has some work to do on early-down defense before he’s a complete player.

New England needs playmakers in its front-seven, and Winovich was providing them with pass-rush and behind the line disruption in the early part of the season.

Both player and team need to find ways to get Winovich on the field more than he was last Sunday.