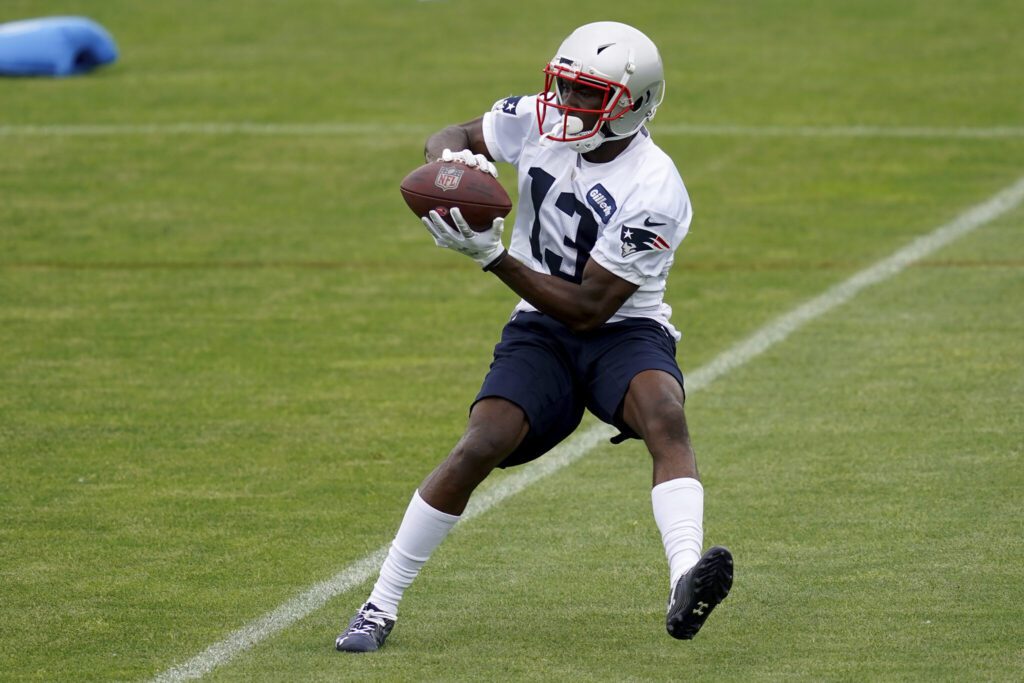 Proof of how uninspiring the Patriots were at attacking downfield in the passing game was in how defenses lined up against New England’s offense last season.

According to data collected by Sports Info Solutions, New England’s offense was one of the NFL’s most bogged down units with only 33 completions of 20-plus air yards a year ago (31st).

There was no semblance of a fear-inducing deep-threat in their arsenal, and defenses recognized that by crowding the line of scrimmage and playing only one safety deep.

To load up against the Pats’ rushing attack, a then Cam-Newton-led offense ran the fourth-most offensive plays with eight or more defenders in the box. The good news is they still ran the ball effectively against stacked boxes (first in EPA per attempt).

The bad news was that the Patriots couldn’t make defenses pay for stacking the line of scrimmage, averaging only seven yards per pass attempt against stacked boxes (18th in NFL).

Furthermore, New England’s passing attack plummeted even further when defenses inserted an extra defender in the box with coverages on the backend that had only one safety over the top.

In pass attempts against cover-one or cover-three structures, single-high safety, the Patriots produced a positive EPA play on just 45% of their pass attempts (29th).

Knowing the lack of explosiveness in his passing offense, head coach Bill Belichick signed one of the league’s under-the-radar deep threats in wide receiver Nelson Agholor to a two-year contract this offseason.

Agholor had the second-most touchdown receptions of 20-plus yards (six) and ranked in the top ten in deep receptions and yards with the Las Vegas Raiders in 2020.

Although the 28-year-old wideout isn’t in the elite tier of Kansas City’s Tyreek Hill or Seattle’s D.K. Metcalf, he was just what the doctor ordered during training camp as a field-stretcher.

And when Agholor was missing from the Patriots’ starting lineup in camp, the offense felt like it did a year ago where everything was happening within 20 yards of the line of scrimmage.

Last season, Agholor made defenses pay for playing single-high coverages towards the strength of the formation with the Raiders.

Here, Agholor is isolated as the X receiver on the bottom of the screen. The Chargers’ defense rotates into a cover-three structure. The weak-side safety is responsible for cutting off any crossing routes at the intermediate level, leaving a single-high safety. Agholor runs by his man for a long touchdown, making the defense pay for lining up the deep safety on the far hash.

During the 2021 preseason, Agholor only had one catch on two targets for four yards in limited work (14 routes). But he was a noticeable threat taking the top off the defense.

“I don’t really think about that like statistically I just think about was I doing my assignment properly? I get out there running the right routes, doing what I need to do,” Agholor said.

In this play, Agholor takes three defenders upfield to open space for Jakobi Meyers’s dig route. The still frame shows what former QB Cam Newton sees right before he pulls the trigger to Meyers, which is that three-fourths of Philadelphia’s cover-four structure is running upfield with Agholor, leaving Meyers in an advantageous situation.

As we roll the play, Agholor’s vertical route creates space for a chunk gain to Meyers.

Later on, Agholor’s vertical release leads to a busted coverage by Philadelphia’s secondary. This time, the Eagles are in a single-high structure, and Agholor’s route occupies the boundary corner to his side of the field and the deep safety. The outside corner on Meyers expects the corner over Agholor to peel off the speedy wideout and cut off Meyers’s route, but he gets hung up on Agholor, and there’s nobody there to pick up Meyers.

“I love it,” Meyers said of having Agholor as a deep threat. “It keeps the safeties off of me and Kendrick [Bourne], which makes it a lot easier for us in the middle of the field.”

Before starting training camp, we published a list of the ten most important Patriots headlined by rookie quarterback Mac Jones and New England’s new tight end duo on offense.

After taking in the summers’ practices and preseason games, omitting Agholor was a mistake.

As we mentioned earlier, the Patriots’ lack of explosiveness in the passing game allowed defenses to crowd the line of scrimmage and key on short and intermediate routes.

Based on last season’s tape and training camp this season, it’s evident that Agholor brings a much-needed deep-threat element to the offense as both a decoy and downfield receiver.

Now the Pats have a legit field-stretcher in Agholor, they can make defenses pay for crowding the line of scrimmage and take coverage away from Meyers, Bourne, and the tight ends.

Without Agholor, that element of their offense reverts to what we saw in 2020.

Agholor has answered New England’s need for speed so far, and whether he’s catching passes or clearing out space, his role is vital to the success of the Patriots’ offense this season.