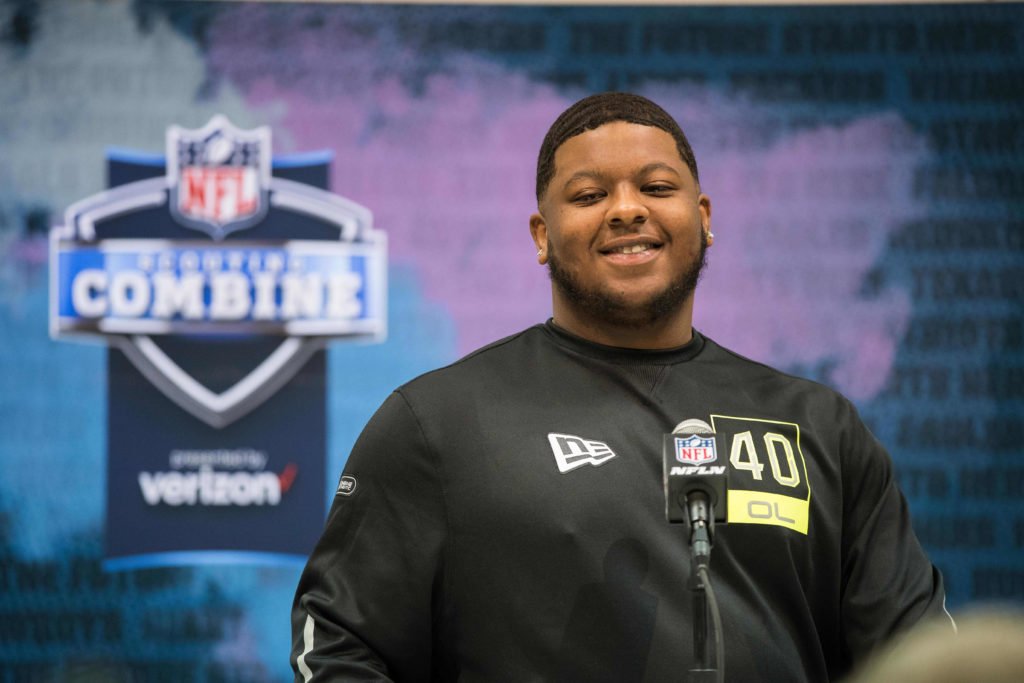 INDIANAPOLIS, IND. — after a whirlwind opening day at the NFL Combine, things settled down from a Patriots perspective as the offensive linemen and running backs spoke to the media on Wednesday.

In the news, the NFLPA representatives voted to send the league’s collective bargaining proposal to the full union for a vote, which has major Patriots implications.

The NFL owners and players association are nearing another decade of labor peace, which would allow the Patriots to make cap maneuvers that could keep Tom Brady in New England.

For instance, a new CBA allows teams to tack on voidable years on to contracts, as the Pats did with Brady last summer, which isn’t permitted without a new deal before March 18.

With dummy years back in play, and the 30 percent cap hit escalator rule also eliminated, the Patriots can move Brady’s cap hits around, making it easier to sign him now or post-March 18; a new CBA before the start of the league year is a significant development in Brady negotiations.

Back to the combine, things were less exciting at the Indiana Convention Center on Wednesday after a massive day with quarterbacks, wide receivers, and tight ends on Tuesday.

But there was still useful information, and the Patriots were busy this week meeting with a stacked offensive line class and a few of the kickers in the draft as well.

Let’s empty the notebook from day two of the NFL scouting combine, where the on-field workouts begin in primetime on Thursday night:

With all eyes on Indy, Patriots head coach Bill Belichick popped up on the scouting circuit in Murfreesboro, Tenn., of all places on Tuesday.

The mastermind behind 6 Patriots Super Bowls was on campus yesterday to watch Tyshun Render workout as he prepares for his professional career.#BlueRaiders | #MT | #EATT | #MiddleMade pic.twitter.com/EJrZatS1eI

According to the Middle Tennessee football twitter account, Belichick was in attendance for deep sleeper Tyshun Render’s Pro Day before heading to Indianapolis.

Render, who wasn’t invited to the combine, projects as a weak-side defensive end or potentially a standup edge defender at the next level. Based on the little tape available online, Render has a good first step, short-area quickness, and natural bend to run the arc.

Belichick’s absence from the combine signals that Director of Player Personnel Nick Caserio is running the show in Indy, which was the case a year ago as well when Caserio ran all combine interviews.

As we wrote before the combine, Michigan center Cesar Ruiz is a prospect that all Patriots fans should know and fits a potential need in the interior of New England’s offensive line.

On Wednesday, we got to speak with Ruiz, who said he had an informal meeting with the Pats and Dante Scarnecchia.

Ruiz is a student of the game that sat in on coaches meetings at Michigan to learn the game from that perspective. Ruiz also told me that he’d like to stay at center because he loves having the responsibility of identifying defensive fronts and making protection calls as the leader of the line, but he’d move to guard if needed. He also added that he loves any run-blocking scheme that allows him to pull and play in space, and as a big-bodied center, he models his game after Raiders Pro Bowler Rodney Hudson.

The Patriots might have an immediate need at left guard if starter Joe Thuney leaves and free agency. Plus, center David Andrews is returning from blood clots, and backup center Ted Karras is also a free agent.

The need is there for the Patriots to draft an interior offensive lineman, and Ruiz has ten-year starter written all over him.

According to the players, retired offensive line coach Dante Scarnecchia is here at the combine conducted player interviews for the Patriots. Scar can’t give up football that easily.

One of those players was USC offensive tackle Austin Jackson. Jackson had a formal meeting with the Patriots at the combine and is one of the better pass-blocking tackles in a stacked class.

The USC product struggled with power early in the year in 2019 because he gave a blood transfusion to his sister, who developed a rare blood disease, and Jackson was a perfect match.

Jackson has tremendous athleticism and length to make an ideal tackle prospect, and although his initial slide needs some work, he’s one of the better pass protectors in this class.

Along with Jackson, the Patriots didn’t meet with offensive tackle Josh Jones yet, but the Houston product figures to be in play for the team in the first round.

Houston OT Josh Jones, one of the most athletic tackles in the draft, breaks down his favorite run-blocking scheme: GT counter or anything that lets him pull and block in space. Jones figures to go in the #Patriots range, backend of the first round. pic.twitter.com/574VtFbaNB

Jones is uber-athletic and loves to block in space as he breaks down his favorite run-blocking scheme above, a GT counter where he gets to pull out in front of the running back. Jones’s game needs fine-tuning, especially his footwork, but he’s a high-upside prospect that has the traits to be an elite pass protector and a factor in the running game. With the coaching they have in New England, molding Jones into a starter seems like a viable option.

Still, tackle depth and a long-term replacement for right tackle Marcus Cannon is on the teams’ radar this offseason.

4. Patriots Kicking the Tires on Kickers in Indy

With a 36-year-old Stephen Gostkowski entering his 15th season and returning from season-ending hip surgery in 2020, the Patriots could be in the market for a kicker.

Three kickers were invited to the combine, and all three spoke on Wednesday, with Georgia’s Rodrigo Blankenship leading the way after an extremely accurate collegiate career.

The Patriots’ only formal meeting was with Georgia Southern’s Tyler Bass, but all 32 teams send a representative to meet with all the special teamers at the combine informally.

The team expects Gostkowski to make a full recovery and kick again in 2020 but could bring in competition and a long-term option at kicker.

We usually lead with free-agent news, but Ogletree’s play throughout his career is so underwhelming that the news fell to the bottom.

Ogletree was a first-round pick out of Georgia in 2013, but a player touted as a coverage linebacker has been the total opposite in his eight NFL seasons. Ogletree surrendered seven touchdowns as the primary defender in coverage over the last two seasons, according to Pro Football Focus. As the graphic shows, he has graded out poorly throughout his career in the PFF system.

So yes, the Patriots like failed first-round reclamation projects, and yes, he went to Georgia, and yes, the Patriots might have a need at linebacker with Kyle Van Noy and Jamie Collins hitting free agency. But no, Ogletree is not someone that I’d like them to sign.

We are now up to 30 of 45 confirmed meetings for the Patriots at the combine. Here’s the unofficial list, starting with new additions on Wednesday:

Here are the confirmed meetings from the quarterbacks, wide receivers, and tight ends on Tuesday:

Note: over the last five years, the Patriots have only selected two out of the 154 players they met with at the combine, according to Mark Daniels of the Providence Journal.