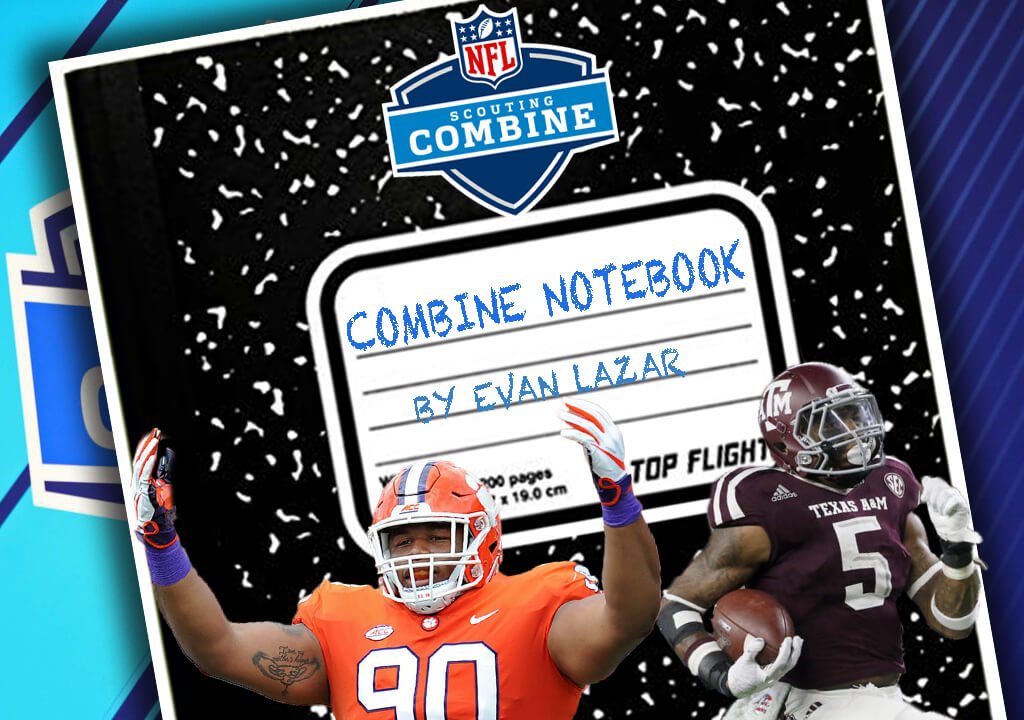 INDIANAPOLIS — On day two at the NFL Combine, we finally got to speak to some of the draft prospects that will hear their name called in April.

The running backs and offensive linemen spoke to the media on Thursday, and the two position groups also took part in the bench press at the Indiana Convention Center.

This morning, a small group of coaches and general managers concluded the team heads’ press conferences as well.

Here are all the best news and notes as things start to heat up in Indianapolis:

Four prospects confirmed to me that they have met or will meet with the Patriots here at the combine, and one said he met with the New England brass at the Senior Bowl.

Williams is someone that’s on my radar for New England as a potential day three pick to add depth to the backfield. He doesn’t project as a feature back in the NFL, but he has a nice blend of elusiveness and patience. Plus, he played on all three downs for the Aggies and was considered a team leader by his coaches and teammates.

#PennState RB Miles Sanders is basically Saquon really lite. He's no where near as explosive as Saquon. Doesn't have the breakaway speed and acceleration. But his running style is similar. Twitchy runner with a low center of gravity. pic.twitter.com/iqqn9fkUt3

Sanders took over for Giants running back Saquon Barkley in Happy Valley, and although he isn’t as explosive as Barkley, he has a similar running style. Sanders’ uses sharp lateral moves and a low center of gravity to elude and run through defenders. He doesn’t have the home run speed or the acceleration that Barkley did, but he’s another option to add depth in the backfield for New England.

As for Howard, he’s a compelling case as a small school prospect that was a late bloomer. Howard played quarterback in High School then hit a major growth spurt and weight gain that caused him to switch positions. He first moved to tight end, and then finally to offensive tackle. With a quarterback background, Howard is a smart player, and his experience at other positions also makes him a plus athlete. He’s very raw in his technique with limited experience at tackle, but he’s the exact project type that the Patriots might look at on day three of the draft to hand over to Dante Scarnecchia for development.

Along with those three, the Patriots also reportedly met with Washington State running back James Williams and Ole Miss offensive tackle Greg Little, per Kevin Duffy and Henry McKenna.

After heavy news day yesterday, things started to shift towards the reason we are all here on Thursday.

As you probably know by now, Oklahoma quarterback Kyler Murray had his measurements taken, and the Heisman Trophy winner passed the test.

Murray came in at a shade over 5-10 and 207 pounds, which was nearly 20 pounds heavier than his playing weight at Oklahoma, and maybe most importantly, his hand size was above average as well (9.5 inches).

If you were still holding out hope, you can kiss Murray goodbye for the Patriots.

DANIEL JONES AND WILL GRIER PASS WEIGH-IN TESTS AS WELL

Two realistic options for the Patriots at quarterback in this draft are Duke’s Daniel Jones and West Virginia signal caller Will Grier.

Jones is a quick-pass specialist with above-average athleticism and the ideal frame for the position.

It might sound archaic because it is, but Jones is in the first-round conversation because he’s a big, tall, athletic quarterback with adequate downfield accuracy and multiple years as the starter under his belt.

The #Patriots will be linked to #Duke QB Daniel Jones throughout the draft process mainly because of his playing style. He is at his best in the quick passing game. Nothing sexy about it but he knows where to go with the ball and gets it out quickly. pic.twitter.com/oBZpmRaMcn

He’s a day two prospect in my grading, but he’ll most likely go at the end of round one in April.

Along with Jones, Grier is another passer that fits the Patriots mold that will likely be a day two pick.

There were some concerns about Grier’s size, but he came in above all of the Patriots thresholds at the position.

In fact, his measurables look very similar to Jimmy Garoppolo’s when the now 49ers quarterback was at the combine before the 2014 draft.

There’s a lot to like about Grier’s tape. He’s an incredible deep ball passer and throws a very catchable ball, but my concerns with him stem from his throwing mechanics.

Grier has a deliberate release that’s a little like a windmill, and his footwork is all over the place which appears to be more of a stylistic decision than an issue with foot speed or coordination.

If he is the Patriots’ selection, he’ll have time to develop behind Tom Brady, but his gunslinger mentality and mechanics won’t fly in the NFL with his average arm strength.

We’ll see if he has refined some of his fundamentals when he throws here in Indy this weekend.

If the Patriots want to take an alternative route, they could find a potential successor to quarterback Tom Brady via trade or free agency.

Two of those potential trade targets reside in San Francisco, an organization that the Patriots have a good working relationship with after shipping Jimmy Garoppolo there in 2017.

With Garoppolo as the starter, the 49ers currently have three quarterbacks on the roster, and their two backups, C.J. Beathard and Nick Mullens, have trade value.

On Thursday, 49ers general manager John Lynch said he’ll be listening to offers on both Beathard (25 years old) and Mullens (23 years old) but noted that the Niners could carry three QBs next season, which is GM-speak for make me a good offer.

Both quarterbacks have things to like, but if I had my choice, I’d choose Mullens over Beathard for the Patriots.

Beathard has the prototypical traits over Mullens such as arm strength, size and athleticism.

But Mullens is a natural thrower with a quick release, good processing speed, anticipation and accuracy.

Here’s a good example from the Niners win over the Raiders this past season.

The 49ers motion running back Matt Breida before the snap to help Mullens identify the coverage. The MIKE linebacker stays put, signaling zone. Mullens takes the snap and stares down a weak side slant route to move the linebacker with his eyes and then threads the needle to tight end George Kittle on a stick route.

Those are the quick decisions combined with accuracy to the middle of the field that make Mullens an attractive option for the Patriots.

Fresh off the Super Bowl loss to the Patriots, McVay gave a great answer when asked about the Bill Belichick and Brian Flores’ game plan defensively to hold LA’s offense to three points:

“They played a loaded front structure which is something we expected. They went with, on early downs, more of a top-down principle where they were playing some quarters structures, kind of similar to what Chicago had a little success with, Chicago mixed things up and did some other things. They [the Patriots] kind of exclusively stayed in that on early downs and distances, and unfortunately, we didn’t ever make them pay. It’s a great opportunity for you as a coach to look inward and say ‘how can we use these as learning opportunities’ to make sure if these things do come up in the future we are putting our players in a position where they’re able to execute on the fly and adjust. They [the Patriots] were mostly playing man principles against teams like the Chargers and Kansas City in the playoffs, and they played a little bit of a different front structure. Basically, against the Chiefs in the AFC Championship, it wasn’t until the 22nd or 23rd snap that you saw a snap of zone. They were mostly doubling Tyreek Hill north and south where they had someone over the top always and then they put in their good matchups. That’s what makes them great coaches and you have to tip your hat to those guys.”

Like most of us, McVay was impressed with the Patriots’ ability to morph their defense away from what they did earlier in the playoffs and acknowledged the Rams’ inability to adjust.