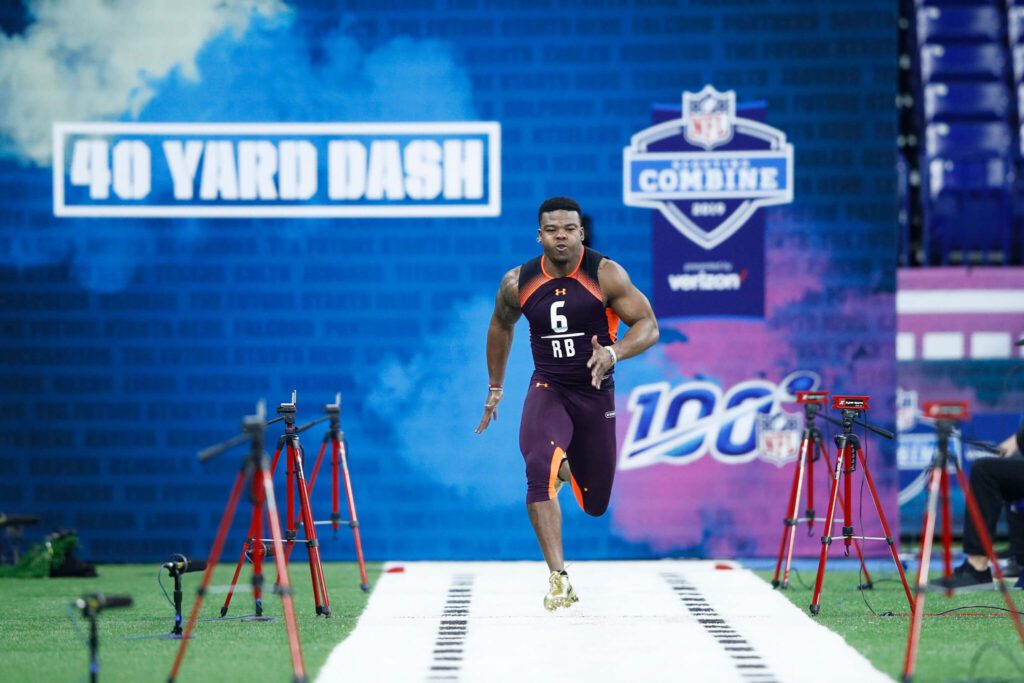 INDIANAPOLIS — Where to start on a busy Friday at the NFL Scouting Combine?

For the Patriots, we’re starting to hear from some of their impending free agents as the market for all 17 unrestricted free agents begins to take shape.

Some of that information is fed to reporters by agents, and should be taken with a grain of salt, but is newsworthy nonetheless.

As far as the draft goes, on-field workouts finally began today with the running backs and offensive linemen taking the field at Lucas Oil Stadium, and there were a few standouts that we’ll get to later on.

But the useful information came from the interview room where the Patriots clearly are showing interest in the pass catchers in April’s draft.

We also heard from a potential Patriots target at quarterback, West Virginia’s Will Grier, and the hype train will continue to roll on connecting with some of the things he said.

Here’s everything that I learned from day three of the combine in Indianapolis:

As you’d expect, the Patriots are doing their homework on the pass catchers in this year’s draft.

And a source described their interest in these pass catchers as legitimate, especially at the tight end position.

Besides Julian Edelman, who will turn 33 years old in May, the Patriots don’t have another wide receiver under contract that played in Super Bowl LIII (excluding Matt Slater).

And based on the feeling here in Indy, it sounds like there will be a decent market for Chris Hogan, Phillip Dorsett and Cordarrelle Patterson (more on that later).

Some of those players, such as Renfrow and Isabella, are obvious fits for the Patriots in April’s draft.

At the tight end position, the Patriots seem to be preparing for life without Rob Gronkowski whether that’s this year or in 2020.

It’s very early in the process, but my sense is that Fant and potential Irv Smith are legitimate options for the Patriots at the end of the first round.

As of now, it sounds like Hockenson will be off the board by the time the Patriots are on the clock.

You can find film breakdowns and more analysis on most of these players in my prospect spreadsheet.

The Patriots have a large group of 17 unrestricted free agents that, as of now, will hit the open on March 13.

On Friday morning, we started to hear from the players and agents via various reports on the free agent market for the likes of Trey Flowers, Trent Brown, Chris Hogan, Phillip Dorsett, Malcom Brown and Danny Shelton.

It’s important to note that most of these rumors are from one side of the table. Agents and players will gladly give out information to the media to strum up interest in themselves and their clients.

With that said, here’s a brief update on each of the Patriots’ free agents that we’ve heard about today:

Trey Flowers’ agent, Neil Cornrich, declined comment on his clients’ upcoming free agency this morning in a text message exchange, but Flowers is expected to have a huge market, including in Miami with new head coach Brian Flores.

Patriots left tackle Trent Brown could demand around $15 million on the open market and will likely go to the highest bidder, according to The Athletic’s Jeff Howe.

Multiple reports also suggest that wide receiver Chris Hogan will have a lucrative market when free agency opens, which is surprising given his play last season and seems agent driven.

I wrote about Patterson’s unique role on jet sweeps and other motions last season.

As for the rest of the group, it sounds like Dorsett, Brown and Shelton are open to returns to the Patriots, but like the others, want to see what’s out there first.

In reality, we are still in a holding pattern with all of these free agents until the negotiating window opens on March 11 and free agency officially begins on March 13.

COMBINE WORKOUT STANDOUTS FROM DAY ONE OF ON-FIELD DRILLS

On the field, we saw the running backs and offensive linemen workout at Lucas Oil Stadium.

Although neither is a significant area of need for the Patriots, it’s important to remember that the Pats pick the best player available on their board and don’t draft for need.

Lindstrom is a perfect Patriots lineman that checks off a lot of their boxes such as versatility, smarts and athleticism. Lindstrom can play all three interior line spots and was a standout on Friday posting a 4.91-second 40-yard dash (second among OL) and a 7.61-second three-cone time (sixth among OL). Lindstrom comes from a football family, and NFL Network expert Daniel Jeremiah mentioned on the broadcast that he screams Patriots.

Howard is a player that I mentioned yesterday after my conversation with him, and he was very impressive during the drill portion of Friday’s session. Howard didn’t test very well athletically, but he’s a smooth mover that changes directions quickly. However, he’s extremely raw, which might actually help the Patriots snag him later in the draft, and then they can hand him over to offensive line coach Dante Scarnecchia for refining.

Harris comes from the Nick Saban pipeline at Alabama, and his answers to my questions about playing in a loaded backfield at Bama screamed Patriots. Harris’s tape is excellent combining a nice blend of power, speed and feel for space into a compact frame. There were some concerns about Harris’ speed, but a 4.57-second 40-yard dash is an acceptable effort, and he placed fourth in the vertical jump (37 inches) and eighth in the broad jump (121 inches) at the position. He checks all the boxes for the Patriots and would be a terrific addition to an already loaded backfield.

Finally, nobody did more to help their draft stock than Oklahoma State running back Justice Hill. Hill proved to be the best athlete in the running back class winning the 40-yard dash (4.40), vertical jump (40 inches) and broad jump (130 inches). Based on his tape, this isn’t surprising, as Hill is incredibly explosive and elusive in the open field. If the Patriots want a change-of-pace back to pair with Sony Michel, Hill is someone they could have on their radar. After his workout, he’s now on all 32 teams’ radar.

Although every position is on the table for the Patriots, we’ll get a long look at some areas of need over the next few days.

WEST VIRGINIA QUARTERBACK WILL GRIER ADDS FUEL TO THE FIRE

During the college football season, I got more questions about West Virginia’s Will Grier than any other player in this year’s draft.

Grier’s leadership qualities are contagious; he has the clutch gene, sees the field well and throws a catchable ball with above-average downfield accuracy. I have concerns about his throwing mechanics and decision making, but with time to refine his skills, he’s a fit from both a team culture and skill set standpoint with the Patriots.

During his media availability on Friday, Grier also dropped an interesting tidbit about the West Virginia offense that made my ears perk up.

Grier said that offensive coordinator Jake Spavital had him watch Tom Brady and the Patriots offense to take schematic things and apply it to their offense at West Virginia. In other words, Grier was running a lot of the same route concepts with the Mountaineers that he’d run in New England. As he said above, West Virginia took “a lot” of the condensed formations and underneath route concepts that the Pats run and put it into their offense to combat the zone coverages that defenses played in the Big 12.

Based on this information, and his film over the last few seasons, the transition into the Patriots’ complex offense could come easier to Grier who had a meeting with a New England scout at the Senior Bowl.