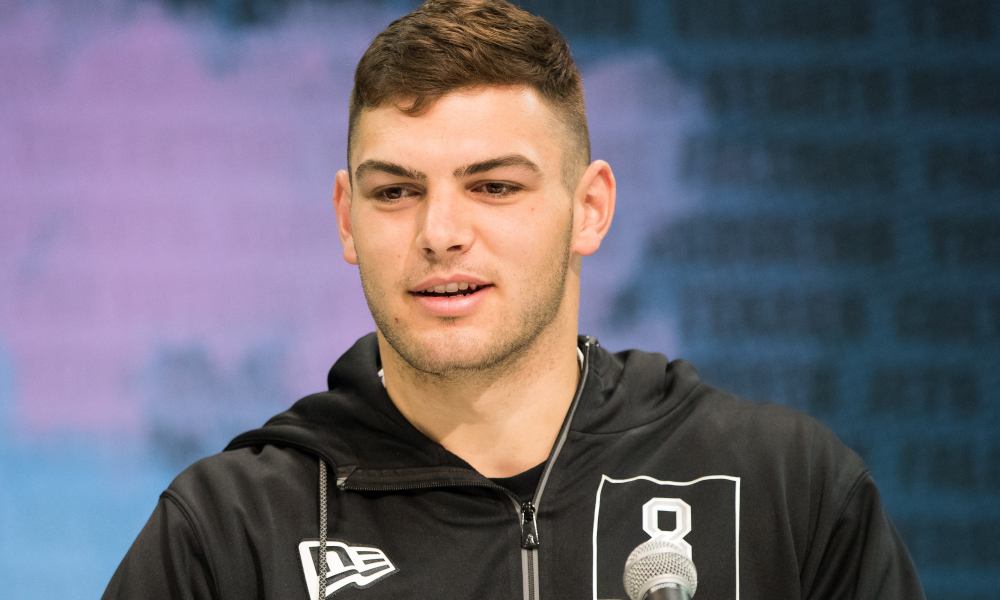 INDIANAPOLIS, IND. — The combine is in full swing with the first group of prospects as well as general managers and coaches speaking to the media on Tuesday.

Neither Patriots head coach Bill Belichick nor Director of Player Personnel Nick Caserio will talk this week, but that didn’t stop the Pats from taking over the conversation.

According to NFL Network’s Ian Rapoport, the Patriots brass and Tom Brady’s agent, Don Yee, will meet for the first “real dialogue” about Brady’s playing future this week. Rapoport also added that nothing is expected to happen until at least the legal tampering period in March.

Although Brady will dominate headlines, Tuesday was a significant information gathering day for yours truly with quarterbacks, wide receivers, and tight ends taking the podium.

Everything that was said should be taken with a giant grain of salt, but speaking to the players offers great perspective into the process and knowledge of hopefully a few future Pats.

Let’s empty the notebook from a busy day at the Indiana Convention Center:

“There is no reason to anticipate that Stefon Diggs is not going to be a Minnesota Viking,” said Spielman.

At last year’s combine, Giants GM Dave Gettleman infamously stated, “we didn’t sign him to trade him” about Odell Beckham. Then Gettleman traded Odell a few weeks later, a lesson to all that you can never take an NFL general manager at their word.

Diggs’s name resurfaced in trade rumors recently after disagreements last season over his opportunities and playing second-fiddle to Adam Thielen in the Minnesota offense.

The Patriots had interest in Diggs at last year’s trade deadline if he became available, per source, but haven’t made any calls to the Vikings about the star wideout this offseason.

New England continues to shop for receivers, though, and is willing to part with significant draft capital for the right player, which is nothing new, they’ve been dangling their first-round pick the last few offseasons in pursuit of a top-flight pass catcher.

My quest this week was to start separating the top of the tight end class, which, based on my film study, lacks a first-round talent with the value coming in day two.

After speaking to several tight end prospects, Notre Dame’s Cole Kmet continues to solidify himself as the best option for the Patriots, although my eyes still love Dayton’s Adam Trautman.

Kmet is a potential difference-maker as a receiver with an excellent burst to get past the initial wave of defenders and catch radius, and at 262 pounds, he’s a monster that’s improving his run-blocking technique.

Kmet said he played at 260 this past season, now up to 262, expects to run around a 4.7. #Patriots #NFLDraft pic.twitter.com/X0ORK2BFrc

In the clip above, Kmet describes his favorite play call in the Notre Dame offense, a drive concept where the offense uses play-action to lure the linebackers upfield and out of the passing lanes. The “Y” tight end, Kmet, then runs a “drive” route behind the linebackers coming across the field, presenting a potential catch-and-run opportunity. Kmet also said he’d work the seam route at times off of a similar play-action fake. Both of these concepts are staples in the Patriots offense.

Kmet told me that he expects to run in the 4.7 range at 262 pounds, which is outstanding, and checks just about every Patriots box at the position.

Trautman also had interesting things to say about the Patriots, saying, “that’s definitely the type of franchise that I can see myself playing for” after meeting with the Pats in Indy.

Both tight ends will be in the mix for the Patriots, with Kmet potentially cracking the first-round if he tests well this week.

Ohio State slot receiver K.J. Hill told a group of reporters that he sat down with Pats assistant Troy Brown on Monday in Indy.

Interesting stuff from Ohio State WR KJ Hill: said he met with Troy Brown, the OSU offense has a lot of similarities to the #Patriots offense, and Hill ran a lot of Edelman-like routes.

Here he is talking about reading out option routes. pic.twitter.com/FZfruGwyC4

Hill said the former Pats wideout is a fan of his game and also pointed out the similarities between the Buckeyes offense and the Patriots as well as his route tree and Julian Edelman’s.

K.J. Hill isn't the fastest receiver in the class but he's lightning quick and shows great attention to detail. Takes that extra step to get on the CB's toes before he breaks off the route. Extra upfield step runs his man into traffic and makes his break more effective. #Patriots pic.twitter.com/YHIg8wXJ2Y

The Ohio State product is one of the quickest receivers out of his break in this class with fast feet and the IQ to read out coverages and set up defensive backs at the top of the route. He played mostly in the slot where he ran option routes with adjustments based on his post-snap read of the coverage, a significant component to the Patriots offense.

Although leaking information about a Patriots meeting is a risky strategy, Hill is a confident player that fits New England’s mold to a tee in the middle rounds of the draft.

We spoke with the 2020 quarterback class on Tuesday, and although a few draftees stood out, Georgia’s Jake Fromm continues to be a name worth monitoring.

Fromm isn’t the most athletic, nor does he have the biggest arm, but his experience playing in big-time college football games and intelligence to absorb the offense are intriguing qualities.

After selecting former teammates Isaiah Wynn and Sony Michel in 2018, Caserio said their performances in the College Football Playoff were a significant part of the evaluation, so Fromm’s experience in the SEC and CFP are a factor for New England.

Fromm has smooth throwing mechanics, makes good decisions, and was in a pro-style system that asked a lot from the quarterback at the line of scrimmage. Sounds like a fit, right?

Jake Fromm says he models his game after Drew Brees. Loves throwing fades and out cuts.

He also said he had as much power as any QB in college at the line of scrimmage. Appreciated the coaches giving him that responsibility. #Patriots #NFLDraft pic.twitter.com/fpCnx4Djot

Fromm says he models his game after Drew Brees, went over his two favorite routes, and appreciates the control he had at the line of scrimmage by the Georgia coaching staff in the tweet above.

The pre-draft process will be significant for Fromm to silence some of the doubts about his athleticism and arm strength, with the latter being a potential anchor to his draft stock.

Along with Fromm, the Patriots have some preliminary interest in Washington’s Jacob Eason and Utah State’s Jordan Love, both of which will have their names called early in April.

The Patriots were reportedly “gushing” over SMU wide receiver James Proche at last month’s Senior Bowl, and Proche is indeed an impressive prospect on and off the field.

The #Patriots were reportedly “gushing” over SMU WR James Proche at the Senior Bowl.

Talked to Proche about that report, the SMU offense, his favorite route and more here. He said he met with the Pats last night. pic.twitter.com/0XDccloTgX

After a firm handshake and introduction, Proche spoke about the Patriots’ interest in him, the offense he played in at SMU, his favorite route, and his meeting with New England in Indy.

#Patriots scouts were reportedly impressed by SMU WR James Proche at the Senior Bowl. He’s got unreal hands and body control to pluck the ball in traffic and contort his body. Varies speeds in his stems and has some wiggle too. Mid-round prospect. pic.twitter.com/OH8xvqVvy8

Proche has terrific hands to make catches outside of his frame and runs routes with technical savvy both at the line of scrimmage and in his route breaks.

The SMU receiver projects as a potential late day two or early day three option currently, but his professionalism in the interview room and athletic testing could solidify him as a day two talent.

The former Pats assistant wouldn’t say much about his former team, but I did sneak in one question about Patriots special teams assistant Cam Achord, who is first in line to replace Judge as special teams coordinator.

“He was a tremendous help to me. I think they got a great guy they’re going to go forward with,” the new Giants head coach said.

The Patriots will need someone to take over Judge’s responsibilities on special teams and his role as wide receivers coach.

Based on how things are in Indy, Troy Brown is operating as if he’ll have a significant role once again with the Pats wide receivers, signaling he might be next in line at that spot on the staff.

The Patriots unofficially conducted 17 of their 45 combine interviews with quarterbacks, wide receivers, and tight ends based on my conversations with the players on Tuesday. Here’s the unofficial list: