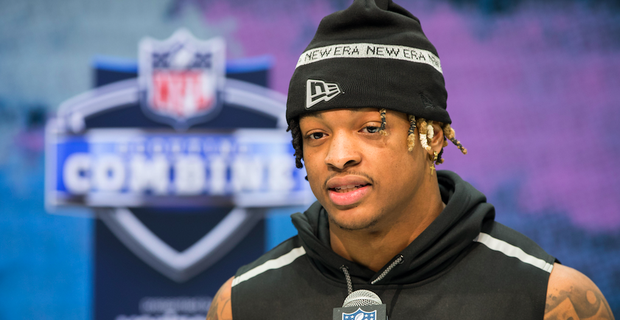 The Patriots had the best secondary in the NFL a year ago, led by DPOY Stephon Gilmore, but Bill Belichick would tell you that the draft is about the long-term outlook, not the immediate need.

The team is doing its homework on the safeties in this year’s class with Devin McCourty (age 32), Patrick Chung (age 32), and Duron Harmon (age 29) getting up there in age.

McCourty will be a free agent on March 18, but as we reported on Thursday, the Pats and the veteran safety have mutual interest to reach a contract extension before the start of free agency.

Still, the team hasn’t invested much draft capital at safety recently despite an aging depth chart, and they’re positioned to land one of the top safeties in the class in the first round.

In the last decade, the Patriots only used one draft pick on a safety selecting Jordan Richards in the second round in the 2015 draft.

On Friday, I spent some time with top safety prospects Xavier McKinney (Alabama) and Grant Delpit (LSU), both of which get mocked to the Patriots often by big-draft experts.

We’ll have more on the safeties later, but we’ll start with some Patriots news as we empty the notebook for the last time in Indianapolis:

Sanu was hopeful that his high-ankle injury would heal on its own, but he’ll need offseason surgery after it didn’t respond well to treatment, according to ESPN’s Adam Schefter.

The Pats wideout struggled, and it was evident that his ankle was a problem, popping up on the injury report for weeks after missing a game.

Sanu had ten catches for 81 yards and a touchdown in his second game with the Patriots against Baltimore, then managed only 15 receptions for 114 yards over the final seven games of 2019.

According to a source, Sanu is in the Patriots’ plans for the 2020 season despite a $6.5 million cap savings if New England cuts or trades him before June 1, although things change quickly.

The Patriots held a formal meeting with Alabama safety Xavier McKinney, who is a lock to go in the first round due to his versatility and playmaking.

Here’s Alabama safety Xavier McKinney talking about the preparation that goes into playing so many spots in the defense.

McKinney, a first-round lock, met with the #Patriots at the combine and is in play at no. 23. pic.twitter.com/h2nwEvkmYL

Saban moved McKinney all over the secondary, putting a ton on his plate each week as the Alabama game-plan defense morphed itself week-to-week. In the clip above, McKinney explains the film study and preparation that went into him playing multiple roles each week.

McKinney said he met with the Patriots in a formal setting at the combine this week and came away from the meeting uncertain of if the New England reps liked his pitch or not.

Alabama safety Xavier McKinney is a baller. Active and all he does is make plays. pic.twitter.com/0Mz2XtlcOX

But when you turn on his tape, McKinney does everything well from playing centerfield with range, covering tight ends, blitzing or filling against the run, and everything else a DC can plan.

The Patriots would come away with one of the best defensive players in the draft if McKinney makes it to them in the first round.

In their mock draft before the combine, both ESPN’s Todd McShay and NFL Network’s Daniel Jeremiah mocked Delpit to the Patriots in the first round, and it’s easy to see why on tape.

#LSU safety Grant Delpit is one of my early favorites from summer scouting. A do it all type safety that wears many hats on their defense. pic.twitter.com/4KUAIkBcpx

Although he isn’t a weapon for Tom Brady, Delpit is an instant starter that can make an immediate impact with his chess-piece versatility, run defense, and man or zone coverage skills.

#LSU safety Grant Delpit says his versatility is one of his best attributes. Played free safety this past season because the team needed it, played in the box more the year before. Delpit might be in play for the #Patriots in the first round. pic.twitter.com/jjJGfZGbKG

As Delpit told me on Friday, he played more snaps at free safety during LSU’s national championship run in 2019 while in years past, he was more of a box safety, a move he made to make his team and defense better.

My only hesitation with Delpit is the same as many, tackling, and the Patriots expect their safeties to be sure tacklers putting pressure on them to limit big plays and fill against the run.

Delpit responded to criticisms about his tackling by first owning that he’s a work in progress in that regard and then adding context that he played through a high-ankle sprain most of the year.

Part of me has a tough time imagining Belichick taking a safety with tackling concerns in the first round, but Delpit is a playmaker with excellent range and instincts on the backend.

If you’re looking for a Patriots sleeper, Utah cornerback Javelin Guidry will turn some heads this weekend when he runs in the low 4.3’s in the 40-yard dash.

Guidry has a track background, and his athleticism shows up on tape, but he’s slated on day three because he lacks the necessary instincts, feel for the game, and is a bit undersized to go higher.

The Utah product describes himself as a press-man corner, noting that he’ll probably end up in the slot and on special teams in the NFL, and fits New England’s day-three cornerback mold.

Along with playing corner, Guidry was a terrific gunner in punt coverage.

Now that we have all of the testing numbers from Thursday night, we can take a look at the infamous three-cone testing at the wide receiver position that the Patriots covet.

Leading the way in the athletic testing was Baylor wideout Denzel Mims, who won the night with a terrific all-around workout and a Thursday night best 6.66-second three-cone time.

Denzel Mims might be the best vertical threat in this years class. Opens up a path to the sideline in his release, throws inside hand to keep jam away, good initial burst and works to stack the CB, uses arm bar to keep the CB away from the catch point. #Patriots pic.twitter.com/rE7XgCHU8A

Mims checks all the physical boxes for the Patriots, but contrary to his three-cone time, his tape shows an upright runner that fails to break down and make horizontal cuts that consistently create separation. Mims was my WR10 before the combine, and overall, I’m high on him as an explosive vertical route runner that blows past DBs and has an enormous contested-catch radius. Plus, he gives all-out effort as a blocker in the run game. But he isn’t the type of receiver the Patriots need.

In some ways, my thoughts on Notre Dame combine standout Chase Claypool are similar.

Bottom of the screen. Corner tries to jam him and Claypool uses a two-hand swipe and runs through the contact. Then goes up and gets it for the TD. #Patriots #NFLDraft pic.twitter.com/9Ad4qkEHBs

Claypool is a stiff and upright route runner that doesn’t possess the sink and explode to make hard cuts and separate. He’ll win on the outside with contested catches and initial explosiveness, and he wrecks dudes in the running game, but he isn’t as fluid as his testing numbers would suggest. Some peg Claypool as a guy that could switch to a move tight end role, which is possible if that involves jumbo-slot responsibilities rather than true tight end blocking duties.

6. Final Tally on Patriots Combine Interviews: 36 out of 45 Interviews Confirmed

We were able to confirm 36 of the 45 combine interviews with the defensive backs still meeting with teams this weekend.

At the combine, prospects get a list of room numbers that don’t have team names, so they don’t know which team is in which room until they arrive, making it tough to peg the DB meetings.

Here is what I found out through my conversations with the players: