Lazar’s Film Notes: Breaking Down the Issues on the Patriots’ Offensive Line 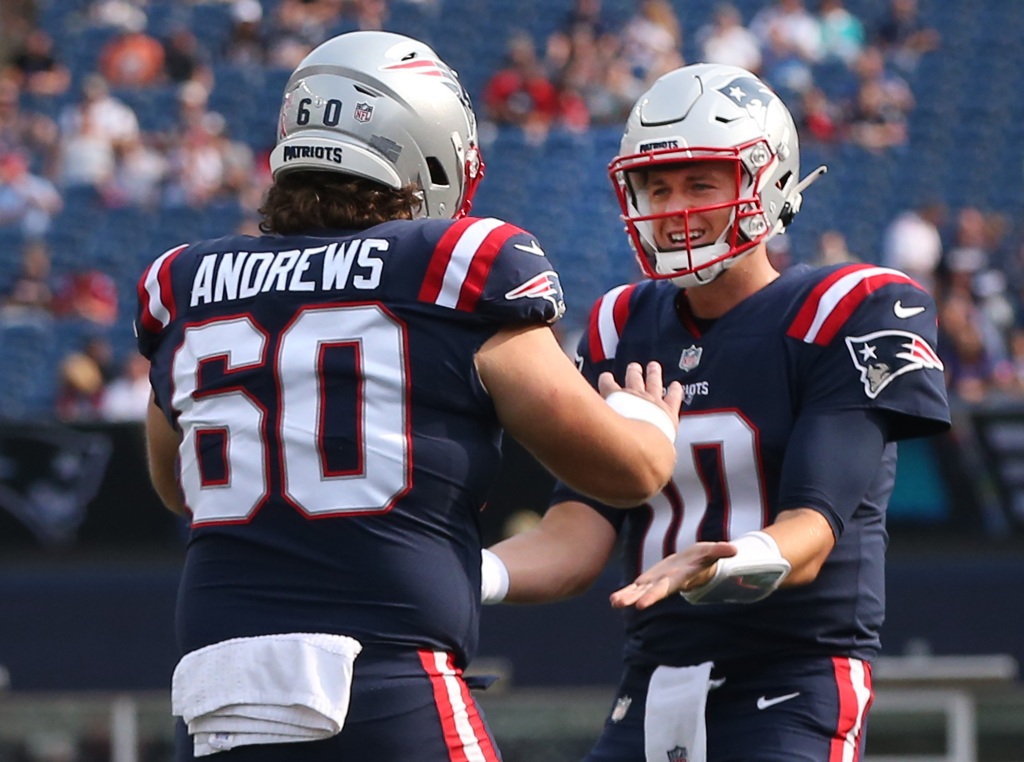 The Patriots’ offensive line is a work in progress like most of their team right now.

After losing longtime starter Joe Thuney in free agency, the Pats acquired veteran Trent Brown in a trade with the Raiders and kicked standout 2020 draft pick Mike Onwenu inside.

Onwenu is starting in Thuney spot at left guard, adjusting to a somewhat new position, while left tackle Isaiah Wynn and center David Andrews adjust to Onwenu, not Thuney. Thuney was next to Wynn for his entire career to date and all but one season of Andrews’s six seasons.

On the right side, Brown is flipping sides from his last stint with the Pats, now next to Shaq Mason. But the veteran right tackle is dealing with a calf injury, so the shuffling continues with second-year tackle’s Justin Herron and Yasir Durant splitting the role in Brown’s absence.

Durant was a late-camp trade acquisition who has been on the team for less than a month.

Okay, so we understand all the moving parts on New England’s offensive line from last year to this year, and now Brown’s injury further complicates things.

Add in that co-OL coach Cole Popovich left the team due to COVID-19 protocols days before training camp, and if you are still with us, the slow start to the season makes more sense.

According to Pro Football Focus, the Patriots’ offensive line ranks 20th in pass-blocking efficiency through the first two weeks of the season.

However, the good news is that the tape shows a unit struggling with mental errors against schemed pressures than breakdowns in one-on-one pass-rush situations.

According to Pro Football Focus, the Pats’ pass-blocking grade when defenses don’t stunt or blitz to generate pressure is a solid 69.5. Against those schemed pressures, it plummets to 29.6.

Here’s an audio breakdown on the stunt blitz scheme that is giving the Patriots’ fits so far this season. The defensive front uses an interior penetrator on the line of scrimmage to free up a wrap player from the second level on a blitz, and the Pats’ blockers aren’t picking those up.

Another issue against the Jets was delayed DT/DE stunts, where the defensive ends chip the tight end before rushing the quarterback. The tackle-guard tandems think it’s a straight rush, but then the defensive end wraps late, and they’re failing to pass those off as well.

The positive is that these are mental errors rather than physical issues; it’s not that the Patriots don’t have the talent to block for Mac Jones. It’s the lack of reps and communication as one unit.

Hopefully, Trent Brown will return from a minor calf injury, and the Patriots will have good health on the offensive line, so the starting five can develop the necessary chemistry.

Suppose Brown’s injury turns into a long-term issue. In that case, picking a five-man combination and sticking with it will benefit the offensive line tremendously, especially if the move is to kick Onwenu back outside to right tackle and insert veteran backup Ted Karras into the starting line.

The latter move feels like a last resort for a coaching staff that is focusing on continuity. Although that’s their best five, the Pats don’t want to move Onwenu around all season.

Protecting rookie quarterback Mac Jones better is a theme reverberating around Gillette Stadium over the last two games, and the problems upfront are theoretically fixable.

Here are several other film notes from all-22 review of Patriots-Jets on Sunday:

1. The One-High Versus Two-High Conundrum for the Pats Offense

One of the schematic themes from the tape against the Jets was New York’s tendency to play with one deep safety. By going single-high, the defense has an extra defender in the box in run support, which is the main reason why Damien Harris averaged just 3.9 yards per rush.

For example, both of James White’s sub-package runs in the red zone were against two-high coverage shells, and the Pats ran power then counter from the gun with ease to run it in for six.

Later on, Mac made the defense pay for going single-high by getting the linebackers to bite on play-action as tight end Hunter Henry ran up the seam behind them for a 32-yard gain.

If the Patriots want to see more two-high shells to open up their running game, they need to average more than 6.3 yards per attempt against single-high coverages (Per SIS).

2. Are the Patriots Holding Back the Run-Pass Option (RPO) Package?

If there is one element of the Mac Jones-led offense that the Patriots are currently holding back, it’s the run-pass options, a staple of Mac Jones’s college offense at Alabama. McDaniels has called just two RPOs through two games this season, even though it’s a clear strength of Jones’s game. In 2020 at Alabama, Jones went 73-for-78 for 890 yards, ten touchdowns, and zero interceptions off run-pass options. Hopefully, that package is coming.

3. Pats Need to Use Their Tight Ends More in the Red Zone

Through two games, the Pats are currently two-for-seven in the red zone, which is dead-last in the NFL. Other than the obvious issues like Damien Harris’s fumble, penalties that put them behind the chains, or protection issues on third down (see stunt pressure in opening section), the lack of Hunter Henry and Jonnu Smith is perplexing. Although the duo has five red-zone targets overall, none of those targets were in the end zone. Spreading defenses out inside the 20 and moving those two around to get them isolated in coverage will do wonders for the red zone offense. They’re both receivers that can win on contested catches, take advantage of leverage, and use their big bodies to box out in tight spaces. Throw ‘em the ball down by the goal line.

4. Issues With Patriots’ Run Defense Against Outside Zone Schemes

On Sunday, the Patriots run defense allowed 152 rushing yards at 4.9 yards per carry against the Jets. Although they had some wins too, it was a very boom-or-bust performance.

After review, the issues the Pats had stopping outside zone weren’t on the edge defenders for the most part. Instead, it was on the interior linemen flowing horizontally with the play and allowing themselves to get pinned down to open cutback lanes.

In this play, the Pats do a nice job closing off the path for the running back to bounce around the corner. However, the backside DE, Christian Barmore, allows the blockers to wash him down to present a cutback lane.

Barmore was far from the only defensive linemen who had issues with getting themselves pinned. Nose tackle Davon Godchaux also got caught moving side-to-side too often.

The offense wants you to flow with the O-Line horizontally because it makes it easier to set up cutback lanes for the running back, which is where the big plays usually happen in that scheme.

New England had the perfect plan in Super Bowl 53 to get vertically upfield and penetrate the line against the Rams’ outside zone-heavy scheme but haven’t been able to replicate it since.

One of the bright spots in run defense was linebacker Ja’Whaun Bentley, who has four run stops through two games. According to inside linebackers coach Jerod Mayo, Bentley is playing faster and looks more athletic this season compared to his first three years in the NFL.

On two occasions, Bentley seemed to sniff out the direction the Jets were running the ball in before the snap and shot upfield to make the play. Bentley beats the puller to the landmark in the first play and gets the back down for no gain. Then, he shoots the gap against outside zone to register a tackle for loss.

Bentley is a faster processor and clicking into blocking schemes, which is improving his pursuit speed.

This is an Adrian Phillips appreciation note. Phillips’s interception was a heads-up play to get his eyes back to the QB and go down to make the INT once it went through Corey Davis’s hands.

Phillips also made a tremendous stop in run defense, going sideline-to-sideline over the trash in front of him to meet the ball carrier with a huge hit. Play speed and recognition at its finest. Phillips is a great football player.