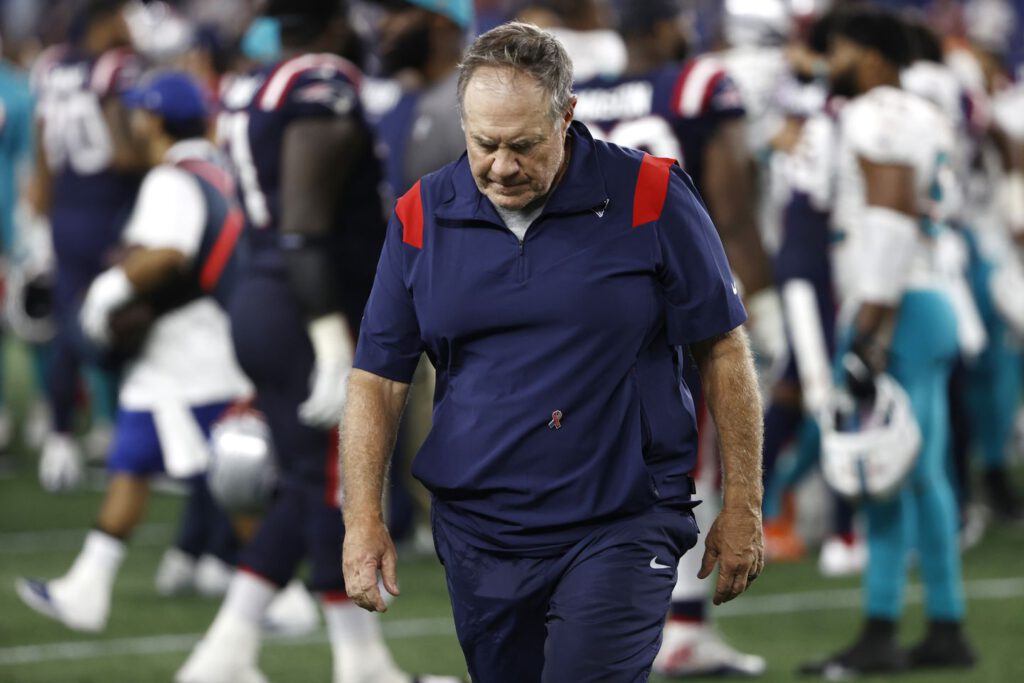 The Patriots’ struggles against option schemes is a yearly occurrence for Bill Belichick’s defense.

In Sunday’s loss to the Dolphins, New England’s issues with run-pass options continued when Tua Tagaviola completed six passes for 70 yards off RPOs.

The conflict that RPOs put defenders in is obvious and is why they’re becoming so prevalent at all levels of football; defenders, especially linebackers, have run fits and coverage assignments. They can’t defend both the pass and the run simultaneously, while committing to one is better than getting caught in no man’s land in between both responsibilities.

In Week 1, the Pats fell victim to the conflict presented by RPOs, with Jaylen Waddle’s 17-yard catch-and-run on Miami’s opening serving as a perfect example.

The Dolphins run a G/TE counter with the backside guard and tight end pulling to the weak side. Tua is reading the backside. If Dont’a Hightower and Deatrich Wise crash to play the run, Tua will work the flat/snag combination to his left. Hightower comes downhill to take on the puller, vacating his short zone in cover-three, which opens a passing lane to Waddle and gives Waddle more space to run after the catch.

We’ve heard the “run players are run players. Pass players are pass players” mantra from the Patriots’ coaches and players before. If that’s their mentality, then they’ll rely on better coverage from their corners to shut down RPO passes.

However, an alternative thought would be to adjust the way the college game has adapted to these types of schemes. College coaches are doing their best to stop the run with their front four, allowing players at the second level to drop underneath in-breaking routes.

The Pats could play a man short in the run fit. Big bodies such as Davon Godchaux, Lawrence Guy, and Matt Judon anchoring the run defense on the line of scrimmage would allow their second-level defenders to close off the middle of the field.

Outside of a game plan against an elite passing attack, we have our doubts that the Pats will adjust to RPOs by living with the yards on the ground they’ll give up playing a man down.

But they’ll need to evolve, and allowing four or five yards per rush is better than over ten yards per pass attempt on RPO or quick-game concepts with linebackers stepping into the fit.

Here are five over film notes on defense from the Patriots-Dolphins coaches tape:

The Dolphins went 1-for-7 in Sunday’s game when Tua Tagovailoa dropped back to pass on third down, with the lone conversion on Tua’s heave on a jump ball to DeVante Parker. The Pats defense registered two sacks and an interception on the money down as well. If that’s any indication, Bill Belichick’s third-down package is still one of the best.

On Jon Jones’s interception, the Patriots are in a “cut” coverage where they pass off crossing routes. At the bottom of the screen, Jalen Mills passes off the shallow crosser to Dont’a Hightower, then rallies back into the middle of the field to help with the crossers in the other direction. The Pats run a four-man replacement blitz, where the edges drop off in coverage, and Adrian Phillips blitzes up the middle. Phillips then combines with Matt Judon on an LB/E twist, which beats the protection and sends Tua scrambling.

Another area of perceived improvement that passed the first test was New England’s re-worked run defense. Miami averaged 3.2 yards per rush on its 23 carries, with a 43% success rate.

Here, Pats linebacker Ja’Whaun Bentley executes a “mesh charge” on a read-option play to force a quick handoff by Tua. By blitzing the mesh point up the middle, Bentley’s interior pressure forces Tua to give it to the back. From there, the back tries to bounce it outside, but Judon successfully sets the edge and makes the stop with Kyle Dugger. The only escape route for the back was around the corner, but Judon was there to shut it down.

3. Jalen Mills at Outside Corner Mostly a Success, With Some Clear Shortcomings

Free-agent addition Jalen Mills mostly held up in coverage at outside corner. Mills gave up one catch on three targets for 13 yards and had a nice pass breakup in the end zone. The catch was a back-breaker, though, with DeVante Parker beating Mills on a quick slant on 1st-and-14 from Miami’s five-yard line on the Dolphins’ game-icing drive. He was in on one coverage bust where he carried a vertical route in cover-two, vacating his shallow zone responsibility, leaving Jaylen Waddle open on third down (but Waddle dropped the pass). Mills’s rules could be to carry an outside vertical in cover-two but based on Jon Jones’s reaction, he expected Mills to be there. Outside of the one catch and lone coverage bust, Mills was solid. The Pats will take that performance

Godchaux is a run-stopper, but his snap reaction and lateral quickness as a pass rusher flashed on tape a few times. He beat the center for a hurry above when the center used inside zone footwork to sell the play-action pass. Godchaux anticipated the centers’ aggressive set and went right around him with a quick lateral move. Godchaux is a good football player, and his presence on the nose is making everyone around him better.

The way Dont’a Hightower was moving in coverage wasn’t concerning. That’s not his strength as a player, and the Pats should try to avoid putting him in space. However, it was concerning to see how easily he was blocked at times in the run game.

Hightower was cut down in the hole on an inside run by Myles Gaskin the play before Tua’s touchdown run, and there were other instances where he wasn’t dominating blockers like we are used to seeing. I’m willing to chalk this up to a potential injury or his first game back after a long layoff. But the Pats need the old Boomtower in the middle of their defense. Let’s hope it’s not a sign of something more ominous.