Lazar’s Film Review: Patriots’ Mac Jones Leaves Too Many Big Plays on the Field vs. Jets 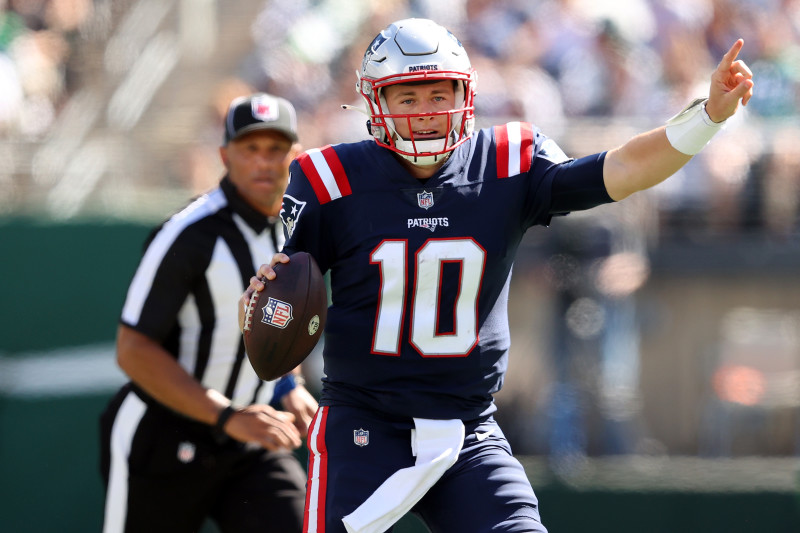 Let’s start with a series of cliches and caveats about evaluating rookie quarterbacks in the NFL.

First and foremost, the Patriots beat the New York Jets and rookie Zach Wilson 25-6 on Sunday. Wilson threw four interceptions to Mac Jones’s zero, and the Pats won handily in a game where Jones didn’t need to take many risks.

Second, out of the 2021 rookie quarterbacks currently starting for their teams, Jones looks the best out of the gate.

Thirdly, development is not always linear, and rookie growing pains are often two steps forward with one step back. Jones made his second start of his NFL career with all new receivers, several of whom are also new to the Patriots this season and an offensive line that needs work.

Jones, and the pieces around him, will learn from their mistakes and grow together over the course of a long season.

Those are important points that, big-picture-wise, must be acknowledged above everything else.

Now, let’s get into the tape from the win over the Jets where Jones left several big plays on the field.

The good news is that it wasn’t all bad for Jones, and to their credit, the Jets defense was competitive all day in coverage and is playing well under new head coach Robert Saleh.

Here, Jones checks out of a run play at the line of scrimmage when he sees a single-high safety shading over the right side of the offensive formation. He communicates with Jakobi Meyers (left), sets the MIKE in the protection, and throws away from the deep safety on a dime to Meyers, who wins on a fade from a condensed split.

However, in the first two weeks, Jones’s average depth of target ranks 31st out of 33 quarterbacks (5.1 yards). And in this instance, the numbers reflect what we saw in the film; Mac had issues pulling the trigger and hitting downfield drive throws.

Drive throws, of course, are different from touch throws. When Jones can put some air under it in the 25-30-yard range, like the throw to Meyers above, he’s good. But when deep throws need some zip on it to beat a closing defender, that’s when he runs into trouble.

We saw inklings of Jones’s issues driving the ball downfield last week when Jakobi Meyers had a cover-zero structure beat, but the ball hung up in the air long enough for Jason McCourty to break up the pass (yes, with bodies at Jones’s feet making it hard to step into it).

Although it was good enough to beat the Jets, Jones needs to hit and attack NFL passing windows to make the Pats serious contenders in the AFC this season.

The most troubling aspect in the tape against the Jets for the Patriots’ rookie wasn’t the throws he passed up, but rather the one he tried and failed. He’ll hopefully develop the confidence to try more throws downfield. The question is will he have the ability to do so?

Patriots offensive coordinator Josh McDaniels tried attacking the Jets linebackers in cover-three several times, sending slot receivers and tight ends on deep over routes against middle hook defenders. However, the Jets had their deep safety help out the linebackers. 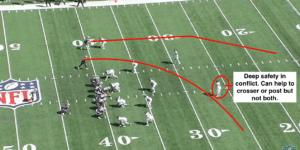 After seeing the Jets essentially bracket those crossers with the deep safety, McDaniels exposed that game plan by running “dino” concepts where the over route occupies the deep safety, leaving a deep post one-on-one with an out-leveraged outside corner.

As we roll the play, the Patriots get exactly what they want. The deep safety jumps Nelson Agholor’s crosser, leaving Kendrick Bourne open on the deep post. Jones sees it and tries to drive the ball to Bourne, but it’s a wobbly throw behind the target, and it’s nearly intercepted. That’s a throw that a starting quarterback in the NFL needs to make, or at least put in a more competitive spot by leading the receiver into the end zone for a win at the catch point. (The neutral zone infraction is a non-factor here. Even if Jones saw the flag, which is unlikely since nobody jumped offsides, the placement of the throw is the issue, not the decision).

In his post-game press conference, Jones put the onus on himself to hit more shots downfield, “It was just me,” Jones told CLNS Media. “I can push the ball downfield more. I can hold the ball in a good way. Maybe just move and try to make a better throw downfield.”

My guess is that Jones was referring to this play in particular. The Pats have Jakobi Meyers and Hunter Henry in a stack alignment to Jones’s right. The Jets try to communicate how to defend it pre-snap with two defenders over there. Most likely, a “banjo” call where the two defenders switch to avoid a pick like defenders in basketball defending a pick-and-roll. However, both coverage players take Meyers, leaving Henry wide-open on a coverage bust for six. Mac doesn’t hold on the read for long enough. Maybe he felt Mike Onwenu losing his block at left guard, but that doesn’t happen till later in the down and shouldn’t deter him from standing in and making this throw. Take the hit or move to throw. Either way, that needs to be a touchdown.

On the one hand, knocking Jones for a 19-yard completion may seem a little nitpicky, but the double-pass worked to perfection, and Nelson Agholor was open for a long touchdown.

There’s the possibility that the Pats design the double pass to hit the intermediate crosser on the first read. Still, it’s likely a home run (Agholor) to check down (Smith) progression. The defender on Agholor bites, and he’s behind the defense for six. All Mac needs to do is throw a floater into the end zone for Agholor, leading him into pay-dirt so that the recovering corner can’t make a play on the ball. The bigger play is there, and Jones should take it.

In this last example, we are asking Jones to stand in the pocket and take a shot as he delivers a pass, which isn’t easy, but he was willing to do it against Miami in Week 1.

The Pats’ offensive line is having issues picking up these four-man pressures in the first two games of the season, where a second-level blitzer wraps around a penetrator on the line. Again, Mac is going to get hit in the pocket. But he should know that Kendrick Bourne’s spot route at the bottom of the screen will hold the boundary defender down, leaving Hunter Henry open for a touchdown on the corner route. Stand in there and make the throw. The NFL isn’t easy, but that’s an NFL-open throw again for Jones.

Here’s a deep throw that Jones may never pull the trigger on if he doesn’t have the confidence in his arm to get it there, but it’s NFL open.

The Pats dial up a “sail” concept into the field, which is a good zone-beater since it floods the left sideline. The progression read is another “home run, first down, check down” situation, with Meyers’s “sail” or corner route as the likely first option, which is where Jones gets stuck.

Once we roll the play a little, Meyers gets tripped up, which throws off the timing of his route. Regardless, the two outside defenders are squeezing the sail route, leaving a good amount of space along the sideline for Agholor on his vertical pattern.

Now, here’s the play at full speed. Jones should throw the go ball here to Agholor by laying it over Agholor’s outside shoulder. Is it a big-time throw? Absolutely. Is it easy? Absolutely not. But those are the types of downfield throws that NFL quarterbacks make.

There’s absolutely no reason to panic about Patriots rookie quarterback Mac Jones’s struggles against the Jets in his second career start.

Some of the plays above, such as the missed coverage bust to Henry, are reads that one would expect a smart quarterback like Jones to hit the second time around. Mac won’t miss that twice.

Plus, the Pats can win football games with a highly efficient short thrower who takes advantage of the easier downfield throws when they are presented to him. Think of a healthy Jimmy Garoppolo or Alex Smith in his prime (don’t cringe at those comparisons, Pats fans, be realistic).

However, the evidence is there through two starts that Jones is a limited downfield passer at this point of his career, who may know those limitations and appear gun-shy as a result.

The question now is can Jones develop better timing and arm strength to drive the football downfield into NFL-sized passing windows?

New England is banking on physical development for Jones in strength training and throwing mechanics, as well as improved timing, will make him a better downfield passer.