Lazar’s Film Review: The Big Plays Are Coming For the Patriots’ Passing Offense 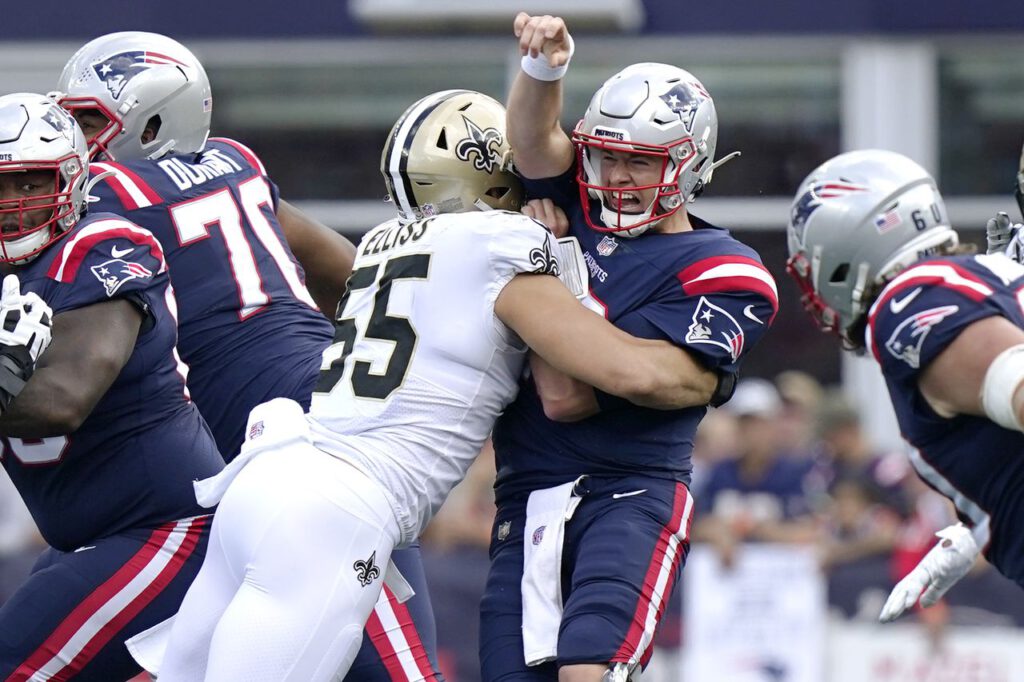 The Patriots’ offensive performance against the Saints wasn’t good enough across the board.

After a live viewing from the Gillette Stadium press box, second-guessing offensive coordinator Josh McDaniels, lamenting about the offensive line’s struggles and wondering where the new weapons are were valid criticisms of New England’s 13-point showing.

However, reviewing the coaches film from Sunday’s loss presented a more optimistic view, and here’s why:

The execution by the Patriots’ passing offense is a long way away from turning a unit that is currently 22nd in Football Outsiders’ DVOA metric into a formidable attack.

But the bread crumbs are there for New England’s aerial attack to turn things around. Keep in mind, we are not selling you on the group from last year. The Pats have legit NFL skill talent now, and they are creating downfield opportunities (and not everything is a tight-window throw).

In an instant gratification world, we should search for hints of future success with an offense that’s only three games into a complete overhaul.

Let’s get into the tape so you can share in the optimism:

Rather than breaking down several close but no cigars, we’ll start with a few completions that the Pats can hang their hats on moving forward.

This double-post concept is the Pats’ best play design through three weeks. First, it’s an Alabama staple that Mac ran dozens of times. Second, it gives Mac an easy read of the safety rotation and multiple options based on the coverage. Third, the Pats added the backside crosser (Meyers) this week to really stress the defense. Lastly, now the three wideouts are in the right spots to best utilize their skill sets. If the safeties rotate to take Bourne’s route away, Meyers will have single coverage and favorable leverage, and vice versa. Plus, if the deep safety jumps Bourne or Meyers, it leaves Agholor one-on-one with leverage on the deep post for a big play.

The safeties rotate into a single-high structure, with the strong safety taking the deep third and the weak side safety turning into a post safety. The post-snap rotation leads to both safeties overtaking Bourne’s route, which leaves Meyers in single coverage. Meyers creates separation at the top of the route, and Mac dots it from a clean pocket. The pocket was clean because Onwenu (LG) and Wynn (LT) finally correctly passed off a T/E stunt. Good play design, good routes by all three receivers, good read and throw by Mac, and good protection. For our money, that was the best passing play execution-wise of the season for the Pats.

Expect them to come back to this play. If the post safety jumps Bourne or Meyers again, Mac might take that shot to Agholor if it’s there. He made the right decision to hit Meyers here.

Another developing connection is between Jones and tight end Hunter Henry, who should be a go-to target on third down. Henry is a great route-runner, and it shows several times a game.

Here, the Saints bring a six-man blitz with the back staying in the protection. The O-Line mainly survives the down (besides at right tackle), giving Mac time to beat the pressure. Due to the blitz, Henry gets a free release at the line and a matchup on a deep safety. He then reads the deep safeties’ inside leverage and breaks out at the sticks away from the defender. Jones hangs in the pocket and delivers to Henry to move the chains. Rinse, wash, repeat.

As we roll the play, the release into the flat by Damien Harris takes the ‘backer to Jones’s left into the flat, and the middle linebacker stays inside with Henry, opening a clear window to Bourne on the spot route. Mac hits Bourne for 11 yards, and it starts the fourth-quarter TD drive.

Patriots offensive coordinator Josh McDaniels is starting to figure out how to use his new weapons properly, and the routes above fit them all well.

Here’s one of many that should’ve hit for an explosive play, but Damien Harris lost in blitz pickup. The levels concept is a Pats staple, and again, the three wideouts are where they should be now. Agholor on the vertical clear out, Meyers on the deep dig, and Bourne on the shallow dig.

The route combination works exactly as planned to get Meyers open. Agholor clears it out, the shallow zone defenders crash down on Bourne’s route, and Meyers is wide open in the second dig window for a chunk gain. However, Harris gets pushed back by a blitzing C.J. Gardner-Johnson, and Mac eats it. Assuming the protection improves, this will hit for a big play.

In another example of a big play negated due to pressure, the Pats use hard play-action from under-center to get Jonnu Smith up the field on a corner route.

Smith (motions to RTE before the snap) disguises the flag pattern in his stem by angling inside like he’s about to block the linebacker, and Saints safety Malcolm Jenkins takes the cheese. Then, Jonnu explodes out of his break on the corner, and Jones knows he has his tight end open right away (post-safety coverage also means the deep safety is a non-factor). But, again, Pats fullback Jakob Johnson fails to pick up the blitzing linebacker, sending Jones into scramble mode, and both tackles also get beat on the play. Mac still delivers the ball to Smith and throws a catchable pass, but the delay due to the rush allows Jenkins to contest the throw at the catch point.

Ideally, Mac wouldn’t drop as deep in the pocket. He drops to ten yards, which is borderline (tackles are taught to run their assignments ten yards past the QB). As he develops, Jones will learn to help his tackles with shorter drops in the pocket.

Here’s another play that was there for the taking, but Jones took an extra hitch up in the pocket, which ends up costing him.

With Meyers clearing out the underneath coverage, Jonnu splits the boundary corner and post safety in cover three up the seam. Smith is open, but Mac takes an extra hitch up into the pocket and puts himself in harms way. With the interior O-Line doing its job, Mac hits this seam route if he stays back in the pocket and delivers without getting hit. Instead, he’s hit while he throws, and the pass sails too far inside for Smith to make a diving catch.

For a pocket passer in his third-career start, these are learning experiences on keeping yourself clean and making life easier on your offensive line, especially when the O-Line is shaky.

The Patriots’ rookie will improve his pocket movement with more reps and coaching.

After a field goal drive before the half gave them life, this was the back-breaker for the Patriots.

The bad news is that it’s one of the worst plays of Smith’s NFL career, a stumbling bobble that ends up in Jenkins’s hands for a pick-six. Yuck. The good news is that I never expect Smith to look so uncoordinated again. The Pats ran their “Charles Barkley” play-action concept where they fake a power run, pull the backside guard to get the LB level to bite, and Smith runs across the formation. Everything goes as planned until the catch. The throw wasn’t perfect, but it’s catchable. Plus, Smith is running away from Jenkins. How many yards would Jonnu gain after the catch? Who knows. But a clean catch-and-run is at least a positive play.

Jones also had a few opportunities to hit Nelson Agholor deep, but the protection didn’t give Mac enough time to let the play develop.

Here, the Saints bring a zero blitz by rushing both off-ball linebackers. New Orleans disguises it well, which turns this into a survival down rather than a situation where Mac could call for max protection before the snap. The blitz leaves David Andrews in a 2-on-1; although he can’t block both blitzers, Andrews gets caught in the middle and doesn’t pick up either guy. Agholor dusts his man downfield on a deep corner pattern, and Jones is on it, trying to retreat in the pocket to buy himself as much time as possible. Unfortunately, Jones can’t get enough on the pass, and it wrong-shoulders Agholor downfield. Again, better protection might change the result in a big way.

One might argue that Jones holds on Agholor’s corner-post route too long here, but it was pressure up the middle again that gave him no chance to progress past it on this play.

Agholor has a chance on this vertical route as the deep safety bites on the route fake but would’ve been a tough downfield throw. As Mac comes off Agholor, Isaiah Wynn and Mike Onwenu fail to pass off a T/E stunt, and there’s pressure in Mac’s face. Reading his eyes and body language, Jones is working to the levels concept to his right (same route design as before). Bourne is open on the deep dig in the first window with Henry pulling the underneath linebackers towards the flat (Bourne is right by the Pats logo). If this is a clean pocket, Jones resets and hits Bourne.