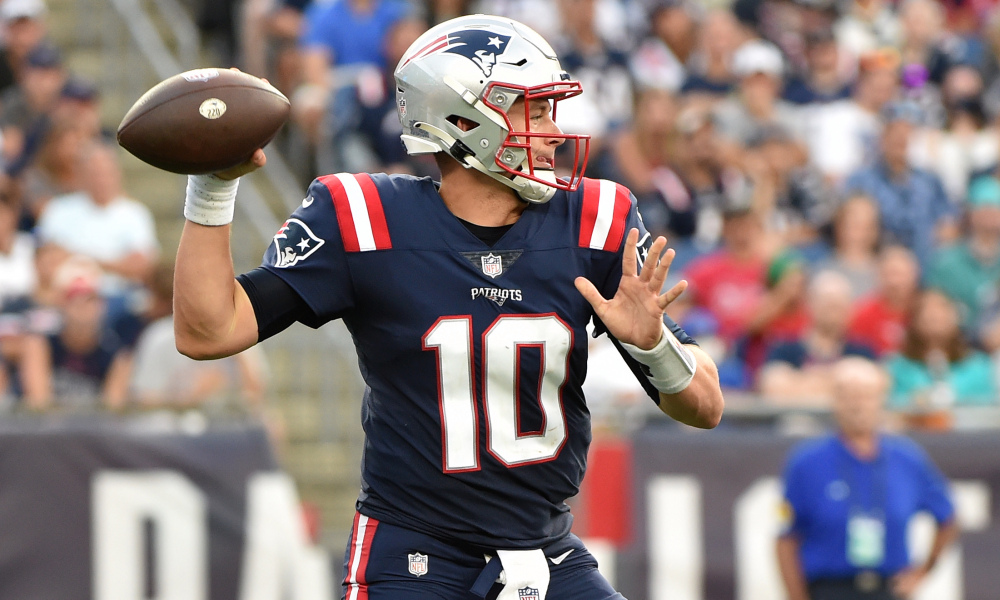 The results for a rookie quarterback in his first career start are often a mixed bag.

In Week 1, we saw flashes of high-level downfield throws in structure from Trevor Lawrence and moments of out-of-structure play creation from the Jets’ Zach Wilson.

But both Lawrence (26th) and Wilson (22nd) didn’t consistently string positive plays together and fell outside the top 20 in Pro Football Focus’s passing grade on opening weekend.

For the first four quarterbacks selected in the 2021 draft, the first week of the NFL season went as expected for rookie quarterbacks. Some played and were inconsistent. Others were deemed not ready to play and sat behind vets. That’s par for the course.

Then, there was Patriots first-round pick Mac Jones. Jones was touted as the most “pro-ready” quarterback prospect in this rookie class, and he delivered on that in Sunday’s loss to Miami.

Although it wasn’t perfect, starting with a backward spike resulting in a fumble and a Dolphins secondary that held Jones to 6.5 air yards per attempt, with his longest throw traveling 28 yards.

Jones showed the consistency of a veteran quarterback. He set the table almost flawlessly to account for 21 Miami blitzes pre-snap, made four big-time throws, read through post-snap coverage rotations, manipulated the coverage, maneuvered the pocket, delivered downfield on several occasions with pressure in his face, and put the Patriots in a position to win.

The 17-16 loss to the Dolphins was not on the rookie, as a late Damien Harris turnover, several penalties that washed out big plays, and poor situational play-calling were to blame.

Miami’s defense is no slouch either. Dolphins head coach Brian Flores utilized his entire blitz package, changed the coverage on the rookie post-snap, and forced Jones to remain patient.

If the Pats get that level of quarterback play from Jones every week, they’ll win a lot of games with him in the long-term, and that’s a bigger takeaway for New England than a Week 1 loss.

Here are five throws from Jones’s NFL debut that prove he’s the real deal for the Patriots:

(Note: I also broke down these five throws in a video breakdown. Click on the link above.)

It took Jones a few drives in the first half to settle down, but the high-level quarterback play that followed was impressive once he did.

On this play, Miami gives Jones a two-high structure on his pre-snap read. Jones calls for the protection to slide to the right, moving the MIKE to #49, and keeps running back James White in the protection. White reads inside-out to pick up the slot blitzer and gives Mac time on a good play call against a two-high coverage. Mac knows he wants to work the safety splitter to Agholor with the defense in Tampa-Two, but he has to hold the seam runner, #55 Jarome Baker, from carrying Agholor’s vertical route. Jones uses a subtle pump fake and looks off to his right, which gets Baker to square his hips to the QB, and Agholor streaks behind him with Mac throwing a dart to beat the half-field safety to the spot.

This time, the Dolphins give Jones a cover-one read pre-snap. There’s one safety deep, a weak side safety down, and man coverage over the trips side. At the snap, the defense rotates into cover-two, changing the picture on the rookie. Mac sees the rotation and knows he has Agholor streaking into the cover-two hole down the left sideline. The Pats call this outside route combination “branch” with the outside slot (Bourne) running the branch route. Against cover-two, Bourne will find the soft spot between the hook defender and the outside corner. Again, Jones uses a subtle pump fake in the pocket to get the outside corner to fall off Agholor and jump Bourne’s route. Then, he throws to Agholor’s back-shoulder while taking a hit in the pocket to lead his wideout away from the half-field safety. My goodness.

Here is arguably Jones’s best downfield throw of the day. Based on the pre-snap alignment of the defense, Mac has a good idea that White has a matchup on a linebacker in man coverage. The defense is in single-high, with squared-up defenders over the four receivers. Plus, the only other defender to White’s side is cornerback Byron Jones, who is in man coverage on Hunter Henry. Even though Baker is in-line as a blitz threat, he’s really the only possibility to cover White. Jones confirms it’s a single-high safety after the snap, holds the middle of the field coverage, and then drops a dime over White’s shoulder for a huge third-down conversion.

One of the most impressive aspects of Jones’s debut was his willingness to stand and deliver from the pocket while taking a hit. Above, the Dolphins get home with a T/E stunt to Jones’s right. Still, the rookie QB stays on his downfield reads. The Pats use an underneath crosser by Jonnu Smith to pull the low-hole player out of the middle of the field (#52 Elandon Roberts). Jones stares down Smith initially to get Roberts to cut off the shallow cross, leaving Henry with tons of room to operate against single coverage. Henry runs a physical route, gets open, and Jones stares down the barrel to deliver the ball to his tight end.

Lastly, a major component of quarterback play is problem-solving. The defense presents you with a pre-snap equation, and it’s on the quarterback to make it work for the offense.

Here, the Dolphins put seven potential rushers up on the line of scrimmage in a cover-zero look. First, Jones motions wide receiver Jakobi Meyers into the formation as an extra blocker while sliding the protection to his right, knowing he wants to throw “hot” in that direction. The Pats used hots to the outside, knowing Miami would drop defenders off the line into shallow zones over the middle. Plus, the corner at the bottom of the screen over Henry has inside leverage, meaning Henry will have the advantage on a speed out. James White has a similar dual-read on the backside as the previous play where he reads inside-out, and the unblocked rusher is the furthest player away from Jones. Jones knows he’s hot, and although you can nitpick the throw, he gets the ball out to beat the blitz and moves the chains.

However, these examples are a handful of plays that were reflective of the bigger picture. As Jones is given more freedom at the line from offensive coordinator Josh McDaniels, the product will get even better.

The five throws above show a quarterback operating at a top-notch level mentally while throwing accurately and under pressure against a legit NFL defense.

Although the end result wasn’t what the Patriots wanted, focusing on the process, not the results, leads you to the following conclusion; Mac Jones is the real deal.