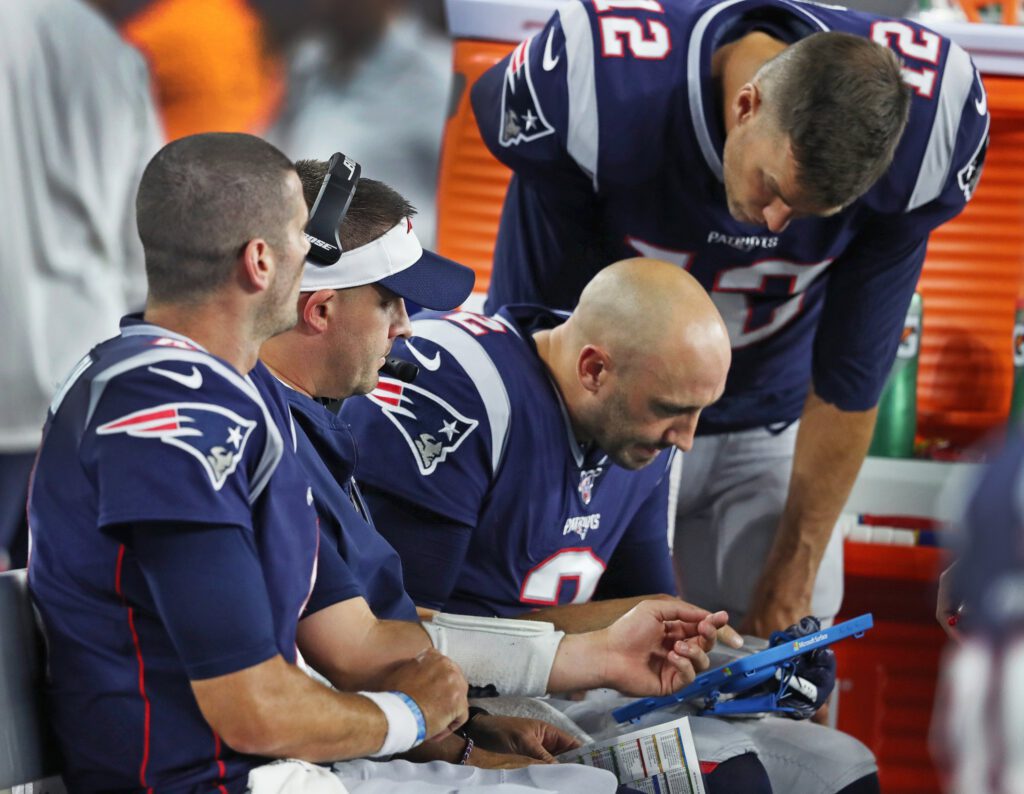 The Patriots had one of their most competitive summers in recent memory, making the roster challenging to whittle down.

Luckily, head coach Bill Belichick made some decisions before Saturday’s deadline that made some possession groups easier to project.

On paper, the Patriots look poised to compete for banner number seven with a loaded defensive roster and a promising group of wide receivers and running backs surrounding Tom Brady.

And even with David Andrews sidelined, Dante Scarnecchia’s offensive line should still be among the league’s best.

Here’s my final stab at a 53-man roster for the defending Super Bowl champs:

The Patriots could trade Hoyer to keep a player at another position. I’d hang onto him, but they’d be fine either way. Hoyer had a strong camp, and his comfortability with running the offense is noticeable. He’s also a good guy to have around for Brady, Stidham and as a scout team QB.

I view all six of these players as essentially locks. Burkhead is the only one on the fence, and that would be due to a trade.

The Patriots caught a huge break with Josh Gordon’s return. There’s some uncertainty in this group; two rookies, Thomas coming off injury and Gordon’s history off the field. But the Patriots look great at wide Receiver heading into Week 1. Olszewski was ultra-competitive, aggressive and a lot of fun, I just don’t see his contributions in the kicking game earning him a roster spot. The Pats are too deep and need the numbers elsewhere. Berrios played ten snaps in the fourth preseason game and didn’t get in until late in the second quarter. Feels like he’s off too. I would expect both to be back on the practice squad if they clear waivers.

The Patriots are obviously in a transition period at tight end with Gronk’s retirement. I expect them to devalue the position in the passing game, distributing most of Gronk’s targets to the receivers and backs. I had Kendricks over Izzo as the blocking tight end in my last projection, but the team showed they’re leaning Izzo in the third preseason game. His effort and physicality as a blocker have been there all summer.

The reviews from Patriots OL coach Dante Scarnnecia on Dan Skipper and rookie Hjalte Froholdt should’ve signified that trades were coming at the position. Froholdt isn’t game-ready yet, and Skipper is likely up for a practice squad spot. Eluemunor projects as a top backup at either tackle or guard and was a sneaky good move by New England. As for Cunningham, he strikes me as more of a fourth tackle with a chance to be the top swing tackle down the road. Both the injury to Froholdt and the David Andrews situation will be worth monitoring over the weekend. More depth moves could be on the horizon.

The Patriots made the decision earlier this week to release veteran Mike Pennel. The move all but locked rookie Byron Cowart into a roster spot. Shelton’s rise this summer is a great development. He slimmed down and is coming off the ball with more force. Hopefully, the former first-round pick is starting to come into his own. Parry was close. He was disruptive at times throughout the preseason.

It feels like we are going light here but linebackers Kyle Van Noy, Jamie Collins and Dont’a Hightower also play on the Line of scrimmage. Winovich and Simon will serve as sub pass rushers. Both Rivers and Calhoun are in tricky situations as they continue to battle injuries. It feels like the writing’s on the wall for Rivers, but I could see Calhoun sneaking on if he’s close to 100 percent.

The Patriots depth and versatility at linebacker is insane. As I said last time, Munson would probably make the initial roster in other years. His only way on is if they trade Roberts, which is a possibility.

The Patriots traded 2018 second-round pick Duke Dawson to Denver rather than releasing him. Keeping Dawson never made sense other than the draft capital invested a year ago. He struggled to stay with receivers at the top of the route, couldn’t get guys on the ground and took too many penalties. Dawson had a few good days in Nashville but never strung them together consistently. Yes, it’s another second-round flop at DB for Belichick, but at least he admitted his mistake, keeping other more deserving players over Dawson.

Melifonwu continues to come close, but it wasn’t enough to make the roster. The physical tools are all there for him to be a hybrid player in an NFL secondary, but his instincts and mental processing hasn’t improved in a significant way. Terrence Brooks was also a pleasant surprise. He passed Melifonwu and got Patrick Chung’s reps in the starting defense while Chung sat out contact practices. Gant would be a strong practice squad candidate if he’s healthy.

The loss of Brandon King was a tough blow to the special teams aces, but they’re still in good shape. Crossen, Bolden and Brooks will primarily play in the kicking game as well.