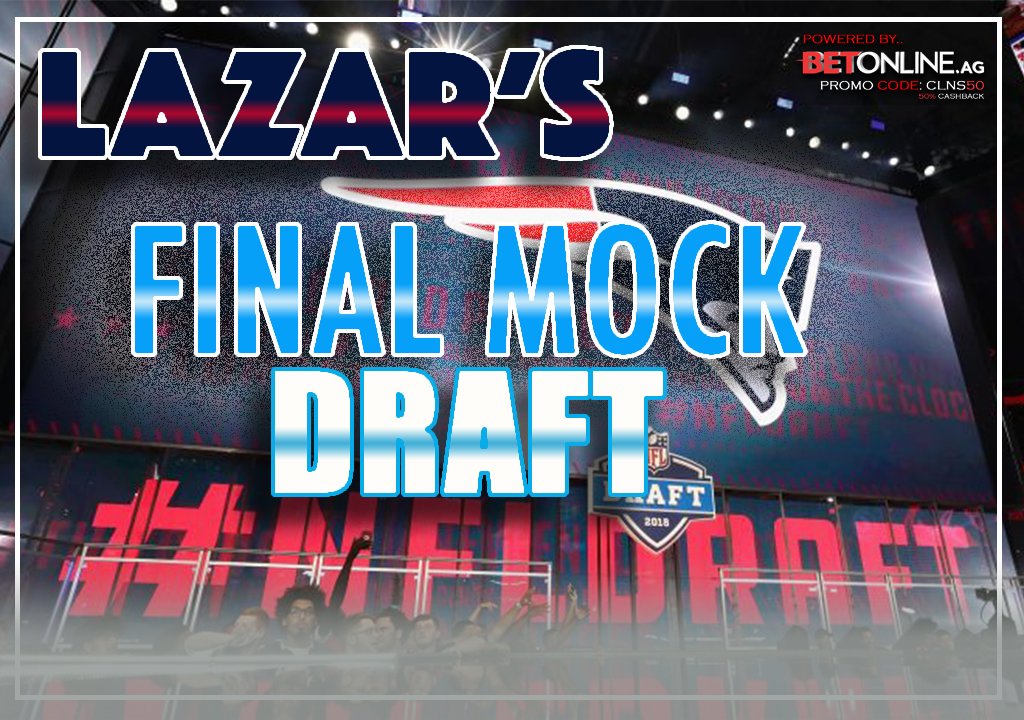 The one Belichicism that I always adhere to with Patriots mock drafts is his cluster system.

The Patriots have a smaller draft board compared to most teams with roughly 100 players listed, according to Belichick.

Within those 100 names are specific roles (two-down linebacker, slot receiver, third-down running back, etc.), and within each of those roles, the Pats rank them in tiers.

For example, in the 2018 draft, the Patriots had linebacker Ja’Whaun Bentley in the same tier as a few of the two-down linebackers taken before him, so they waited until the fifth round to select Bentley.

In the 2019 draft, the Patriots’ clusters at some of the deeper positions such as offensive line, defensive line and wide receiver will dictate how things go for them this weekend.

With only days to go, here’s my final stab at a seven-round Patriots mock draft:

By my estimation, the top tier of the Patriots’ defensive line board will likely include Tillery, and Clemson stars Dexter Lawrence and Clelin Ferrell; it sounds like Tillery is the most likely to fall in New England’s lap. There are some weird vibes out there about Tillery’s personality, and despite his talent, many trusted sources have him outside of the first round. That makes me think a team at the end of the first round, maybe the Pats, are eying the Notre Dame pass rusher. His versatility to play at different alignments and sound fundamentals fit the system well. Trey Flowers is a Detroit Lion, and the Patriots do well by replacing him with the future in Tillery and veteran Michael Bennett.

TRADE: Patriots trade the 56th and 101st selections to Washington for the 46th overall pick.

As always, we can expect a lot of trades from Belichick on draft weekend. We try to predict one here, and it comes back to the cluster theory. This is a strong offensive tackle class, but the dropoff after a certain point is considerable, so the Patriots jump up ten spots to get one of the premier players at the position. New England could opt for left tackle prospects in Ole Miss’s Greg Little or Kaleb McGary, and I also like the versatile Tytus Howard here, but we go with Risner as a system and culture fit. A three-year captain, Risner was like a senator fielding questions at the combine, and I mean that in a good way. He’s an intelligent player on and off the field, and he plays with a nastiness that Dante Scarnecchia will love. Risner’s upper body strength is immense as one of the best people movers in this class, which makes him a perfect fit at right tackle or guard for the Patriots. Shaq Mason and Risner give the Patriots two bulldozers on the right side.

The Patriots get their Brady successor in the second round rather than at the end of the first round as the rumors suggest. There’s no doubt that the West Virginia product fits New England’s mold, but the first-round buzz feels like a smokescreen, and this feels like the right range for Grier. Grier’s willingness to attack tight passing windows with above-average accuracy and decent ball security in terms of interceptions bode well for his NFL success. He has some footwork issues to iron out and doesn’t always protect the ball in the pocket, but he’ll have time to develop, and he has the makeup of an NFL starter. In this range, the Pats will likely choose between Grier or N.C. State’s Ryan Finely with Brett Rypien (Boise State) and Jarrett Stidham (Auburn) as day three options.

Like the tackle position, the tight ends in this draft start to decrease in value quickly as well. After missing out on the top three guys, they grab him here. Although he’ll have to develop as an in-line blocker, Sternberger’s receiving skills as a seam stretcher and yards after catch machine make his projection into the Patriots offense easy. Outside of top prospect T.J. Hockenson, Sternberger is the most pro-ready receiver at the position in the class. Tight ends don’t usually produce big numbers as rookies, but Sternberger should have an immediate impact on the passing game.

The Pats wait on a wide receiver until the third round, and this one directly relates to the tier system. From this perspective, it feels like the Patriots would value a four-down weapon like Hardman similarly to some of the bigger names in the top 50 such as A.J. Brown or Deebo Samuel. Hardman has game-breaking speed to take the top of the defense and pick up yards after the catch. He’ll likely play in the slot most of the time but could end up like Julian Edelman as a player that moves around the formation. Plus, he’ll fill a need as the teams’ primary kick returner and could give Edelman some relief on punt returns as well. He’s a great fit in New England.

This is a great year to double-dip at wide receiver, and with the Patriots waiting until the end of the third round at a significant position of need, they take two players from their mid-round tier to hedge their bets. Hurd is a raw prospect that only has one year at wide receiver under his belt after making the switch from running back, but the Pats will love that versatility. Hurd reminds me of a more flexible version of Cordarralle Patterson, which gives him more upside as a route runner. Like Patterson, he’s a gadget weapon and can serve as an emergency running back. Hurd played mostly in the slot at Baylor where he won with a unique combination of size and explosiveness.

I’m going to keep banging the drum for another Rutgers safety until it doesn’t happen. Hampton was a team captain that was also a core special teamer from day one for the Scarlet Knights. He moved well at his Pro Day and projects as a free safety with some potential as a hybrid backer if he doesn’t have the range to play in the deep part of the field. You’d like to see a little more aggressiveness out of Hampton, but he’s a fundamentally sound tackler, which is a must for all defensive backs for the Patriots.

The Patriots didn’t get a run-stuffing nose tackle early, but they do get one late in Russell. The anchor of the Auburn run defense, Russell was a four-year starter for the Tigers and a pour mans Dexter Lawrence. A below-average combine and lack of pass rushing value make Russell a late day three pick, but the Patriots would love to get him here as a team that will value his run defense.

With Risner slotted as the right tackle of the future, the Patriots take a late-round flier on a big-bodied tackle with a tremendous athletic profile. Nijman tested in the 96th percentile in Indy and has the necessary knee bend to slide and leverage blocks, but his pass set technique needs a lot of work. Give him to Scar and see if the GOAT can unlock all that athletic upside.

Another system fit, Alaka joins Bentley, Christian Sam and Elandon Roberts as the latest late-round linebacker selection for the Pats. The Texas A&M product projects nicely into New England’s two-down linebacker role as one of the top run defenders in the class, and meets the Patriots’ height and weight thresholds at the position. He attacks the line of scrimmage with the best of them and has terrific diagnostic skills. The Patriots will scheme around his athletic deficiencies in coverage.

One last time: tiers. Clemson’s Hunter Renfrow and UMass star Andy Isabella rank above Easley at slot receiver, but the Iowa standout isn’t all that different from those two. Easley, like Riley McCarron before him, has a smooth projection in New England as Belichick’s buddy Kirk Ferentz uses his shifty pass catchers similarly at Iowa. Easley is lightning quick out of his breaks posting a 6.55 three-cone time at Iowa’s Pro Day, and feasted off of the juke, sit, return option route tree that is a staple out of the slot with the Patriots. He’ll compete with Braxton Berrios in camp for a roster spot.