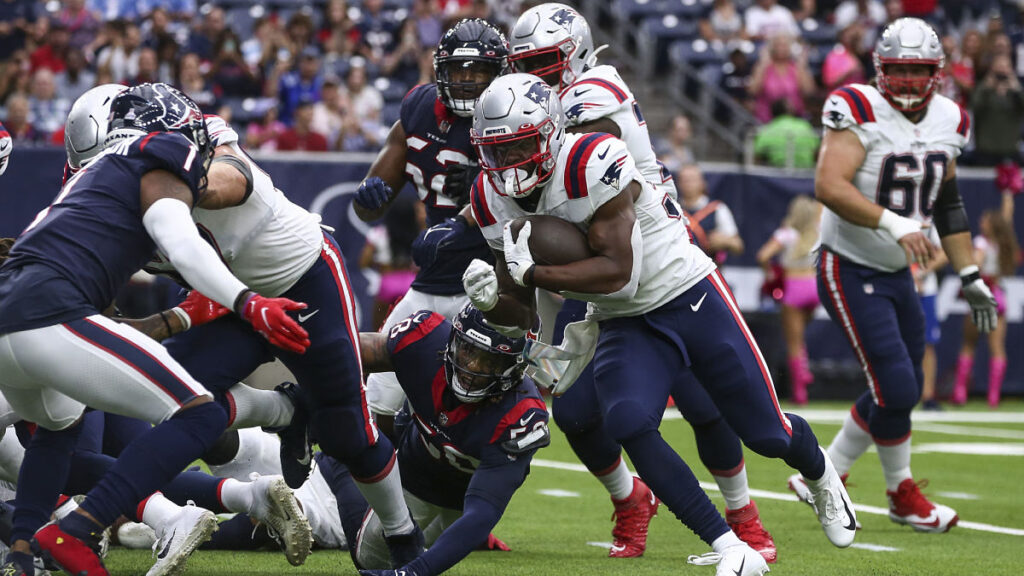 The Patriots’ starting offensive line is under fire for underperforming to this point in the season.

Rookie quarterback Mac Jones was hit 27 times in the first five games, which is the third-most in the NFL, and New England’s O-Line hasn’t handled blitzes particularly well. 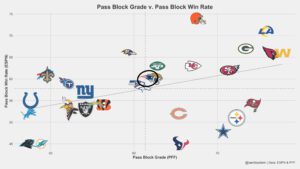 However, frustrations with the offensive line in pass protection are misguided. The Pats are slightly above league-average pass protection based on PFF and ESPN metrics (see chart above).

The far more significant issue is that the Pats can’t run the ball. They’re 30th in PFF grade and dead-last in run blocking win rate. As a result, New England is 28th in rush EPA and 27th in DVOA.

If you think for one second that the plan for Bill Belichick was for his rookie quarterback to drop back 38 times per game (eighth-most), then you’re smoking something. This wasn’t the plan.

The Patriots’ offense was built in the offseason to run the football behind a veteran offensive line with talented ball carriers out of two-tight end packages. Now they lost a big piece, literally and figuratively, when starting right tackle Trent Brown (calf) went on injured reserve.

But in the first five games of the season, New England is averaging just 3.7 yards per rush (27th), and the lack of balance offensively is hurting them.

Defenses are now teeing off on Jones, with the first-rounder facing the second-most blitzes in the NFL, and a high-volume passing attack is causing the pressure on the quarterback to add up.

Although Jones is a talented passer, the Pats need high-quality run-blocking to have a potent rushing attack due to Mac’s lack of mobility. When the defense faces a mobile quarterback, they need to account for the QB in the run game. But the Pats’ quarterback is no longer a threat.

There are several examples in recent NFL history of strong rushing offenses with stationary quarterbacks. However, in all those cases, and even in offenses with running QBs, the run game goes as far as the offensive line takes it.

The data now tells us that most run production comes from blocking, and there are only a handful of exceptions where a ball carrier adds substantial yardage on their own.

New England has good running backs in Damien Harris and rookie Rhamondre Stevenson, but neither back will add another dimension to the offense without help and ball security issues are plaguing the ground game as well (four fumbles in five games)

The bottom line for the Pats offense is that the run blocking from the offensive line and tight ends must improve for this unit to reach its ceiling.

Without further ado, let’s empty the Week 6 mailbag. As always, thanks to everyone who asked questions this week:

Do you see Mac's arm improving either from refinements to his mechanics or from NFL strength training?

We plan to have QB mechanics guru Tom House on Patriots Beat at some point to discuss this very topic. The short answer is, yes, Mac can improve his arm strength with better mechanics and by improving his physical conditioning. Although he can add velocity in that vein, more importantly, improving his timing and processing speed will lead to fewer issues with downfield velocity. Mac has plenty of arm when he can step into throws and sees things quickly, but he runs into trouble when he’s throwing off his back foot or late to receivers. As he improves as a processor, his throw velocity will look better.

And the new one:
Do you want Onwanu to RT or roll the dice with Cajuste again this week https://t.co/NuGz8hPgFZ

I’m the conductor of the “Onwenu to right tackle” train and still think their best O-Line until Brown comes back is (left to right): Wynn-Karras-Andrews-Mason-Onwenu. But the coaching staff is doing just about anything it can to avoid kicking Onwenu back outside, likely because that is his long-term position. Based on his success at left tackle, it appears that Justin Herron is better on the left side than the right side. If the coaches feel the same way, it could be Cajuste again at right tackle. Ideally, Herron plays at right tackle and finds his game over there. He’s a solid left tackle and a better option than Cajuste at this stage.

Was Nelson algholar worth the money? Why haven’t they tried to get him open downfield? Or do the things he is known for?

It’s a fair question. My answer is that the Pats are trying to get Agholor open deep, but right now, that’s not playing to their offense’s strengths. Plus, defenses are blitzing Mac at a high rate, preventing those longer routes from developing. Agholor’s best bet is to use his speed to open space for others and win on intermediate routes, and he’s starting to do that. We see him creating space for the tight ends and inside receivers and winning on in-cuts and deep curls off vertical stems. Is it fully worth the price tag? Not yet. But defenses are accounting for him more than they did when Damiere Byrd was in that role last year. Unfortunately, sometimes when you shop in free agency, you end up overpaying a little bit for good, not great players to upgrade your roster.

On Cover 1 Robber calls I saw Adrian Philips was usually the hole player with Dugger playing the TE. Is the consensus that Dugger is better in man coverage than Philips? He got beat on some crucial 3rd downs.

Good question because I’m wondering the same thing. I understand that the Pats are trying to develop Dugger in the Chung role, where covering tight ends is a significant aspect of that job. But he’s a natural ball-hawk and looks unnatural playing man coverage. On the other hand, Phillips was great in camp against tight ends and looks more comfortable there. I also wouldn’t hate trying Joejuan Williams or Shaun Wade on tight ends since clearly, Williams isn’t making it as an outside corner. At the very least, I would try flipping Dugger and Phillips to make Dugger the rat/hole defender instead. Watch his Lenoir-Rhyne tape. Dugger was a legit ball-hawk there.

Are the Patriots in trouble with these defensive backs? Thoughts on JC and Mccourty this year so far?

The Pats aren’t in major trouble in the secondary, no. But their performance against Tampa Bay should be treated as an outlier. The Bucs dropped five passes in the rainy conditions, Belichick’s plan coupled with his return to Foxboro threw Brady off his game, and Antonio Brown was open all day long. It was a good performance, but the circumstances that led to it were unique. We’ll need to see the Pats’ secondary hold down another explosive passing attack before we buy all-in. Maybe it comes this week against Dallas.

Has Jalen Mills been that good or do they protect him with safety help over the top?

Mills’s success is a perfect example of a player playing within structure. In other words, he’s doing a great job of playing to his help and not trying to do too much. The Pats’ coverage system gives him post-safety and often robber/middle-of-the-field help, and Mills is shutting down the routes that he’s expected to cover on his own. Some might take that as a negative, but it’s overwhelmingly positive. Mills looks like an assignment-sound player that will do his 1/11th in the Pats secondary. That’s very valuable in the NFL.

What is your evaluation of Dont’a Hightower’s play?

Hello, Miguel. Thanks for asking a question this week. My assessment on Hightower is that he looked very rusty in the first four games but turned it on against Houston. For Hightower, being a step ahead mentally is critical to his game, and he looks faster when he’s clicking into blocking schemes quickly. The Hightower we saw against the Texans was reading things out in a hurry and getting to his landmarks much faster than in the previous four games. If that’s the Hightower the Pats get the rest of the year, they’ll be in good shape in the front seven.

Since the Saints game have seen Devin McCourty lost in a few plays. Last week in Houston he even acknowledge it was a bad game for him. What’s your take in his season so far?

The Texans game was the worst game I’ve seen McCourty have in my time covering the team. But I don’t think it was a speed issue in the sense that DMac has lost a step. Instead, he’s taking poor angles to the ball and running himself out of the play or taking too many chances hunting for a pass breakup. McCourty is smarter than that, and I expect him to play much better than he did against Houston.

Any trade targets that make sense? Who are possible trade candidates on Pats roster?

Trade questions are always difficult because it’s tough to project without knowing the market and what the Pats are willing to give up. The most obvious move on the board is calling Houston about Rex Burkhead. Burkhead is banged up, as is tradition, but if he’s healthy enough to contribute, that would be a quick fix to the third-down back role. If Stevenson and Taylor continue down this path, there will be a move at running back. The Pats can’t keep playing Brandon Bolden this much on offense. It would have to be for a more significant return than Burkhead, but I still see Chase Winovich as a possible trade chip.

Love the framing of this question, which is one I ask myself after every game. The optimist in me is leaning towards number two. The Pats are a rebuilding team that’s hoping to reboot on the fly. In reality, they’ll probably be truly “going for it” in years 2-4 of Mac’s rookie contract. Right now, it’s all about building a foundation for future success with a remade roster. Could they sneak into the playoffs this year? I believe so. But the big-picture goal is to keep the arrow on the Mac era pointing upward.