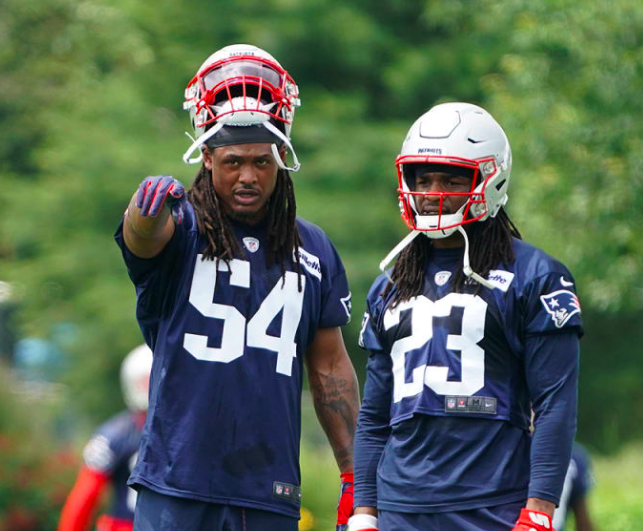 Patriots head coach Bill Belichick is currently standing behind Cam Newton as his starter, but as the competition begins to heat up, rookie Mac Jones is getting extended reps to prove himself.

Although the quarterbacks are the hot topic, we’ve discussed the position at length almost every day of camp. With that in my mind, let’s focus on the other side of the ball for a change.

The upgrades the Pats made on defense, mainly in the front seven, are as critical to the teams’ success this season as drafting Jones in the first round or the receiver additions.

Defense Line (camp grade: B+) – I would like to give this group a higher grade, but the injury to rookie Christian Barmore put a damper on things. Barmore looks like the most explosive and potentially dominant member of the defensive line. He has the tools to be a three-down monster and was especially impressive in Tuesday’s one-on-ones, where he won four out of five reps. Godchaux and Anderson look like nice additions. Anderson had a solid second day in pads and is looking the part of a stout defensive end who is tactically advanced. Godchaux is playing his role as an immovable object at nose tackle. Besides Barmore’s injury, the only negative is that Deatrich Wise looks about the same as last year. He was a solid rotational player for them a year ago, but he’ll need to do more to live up to his new contract. If Barmore develops into a difference-maker, this group will take a giant leap forward this season.

Outside Linebackers/EDGE (camp grade: A-) – veteran linebacker Kyle Van Noy remains in a red non-contact jersey, so we don’t have a complete evaluation of him. Still, newcomer Matt Judon had a dominant first day in pads and brings some much-needed power and explosiveness to this group. Judon has at least three run stuffs and four sacks through nine practices and looks like the guy they thought they were getting in free agency. Second-year linebacker Josh Uche is taking reps both on and off the line, but he stands out the most as a standup pass rusher. He has a freaky first step and the ability to bend around the corner. Uche is still looking for consistent pad level against the run, but he has some electric reps as a pass rusher. As for 2020 third-round pick Anfernee Jennings, he is playing on and off the line too. Jennings is playing faster and is putting himself in better positions around the ball. Rookie Ronnie Perkins is starting to come on against the scout team offensive line, and 2020 UDFA Rashod Berry is a sleeper candidate to make the team with some impressive speed-to-power.

Linebacker (camp grade: A) – I’m giving the linebackers an “A” because, outside of Hightower, almost everyone is exceeding expectations. Hightower hasn’t missed a beat and is moving very well. Based on what we’ve seen, I expect him to be the same player he was before the opt-out. The biggest surprise of the defense so far might be Ja’Whaun Bentley, who is having a great camp. Bentley has two interceptions already, including a legit climb-the-ladder pick of Newton, and is benefiting from better play in front of him against the run. Bentley is moving better and is in the right role now with Hightower, Van Noy, and others in the mix. The other surprise of camp is free-agent addition Raekwon McMillan. An ankle issue slowed his progress, but McMillan is picking up the defense quickly, is a good athlete in space, and plays on special teams. At this juncture, it would be a surprise if McMillan doesn’t make the team.

Okay, there are the positives about the Patriots’ defense, but here is the issue: without Stephon Gilmore in the lineup, the cover talent in the secondary isn’t good enough.

The high marks in the secondary go to cornerback J.C. Jackson, slot corner Jon Jones, and safety Adrian Phillips. Those three are having strong camps, Devin McCourty is Devin McCourty, and safety Kyle Dugger and defensive back Myles Bryant pass the eye test with a solid C+ grade.

However, the man coverage talent behind Jackson and Jones is worrisome.

Dugger is more competitive in coverage against the tight ends but is still trying to figure it out. Third-year corner Joejuan Williams is mostly a liability, potential dark-horse Michael Jackson, Sr. is worse than Williams, and the most disappointing player on defense is newcomer Jalen Mills.

Mills is not a reliable outside corner, and he will get exposed if that is his role. Mills is reactive to release moves and route fakes, opening his hips too early, causing him to lose ground.

There is a role for Mills as a sixth DB, but the Patriots desperately need “Coach Gilmore” to return to his day job as their top cornerback, or there will be weak links in this secondary.

An improving pass rush may cover up some of those weaknesses, but the Patriots need Stephon Gilmore, or they’ll need to play Mills or Williams in a prominent role. No bueno.

My panic meter isn’t very high yet on the secondary since Gilmore should be ready to go by Week 1. Still, if I were an opposing offensive coordinator, I’d view this secondary as beatable if you attack the weak links.

With all that said, let’s empty the mailbag and answer some of your camp questions:

A question more focused on the future:

How does the Corner situation look for the Patriots?

With Gilmore and JC Jackson both on expiring deals, is there anything behind them for depth in the future?

Along the same lines as above, this is a great question. The Patriots didn’t draft a corner in April, Williams isn’t developing into the player they had hoped, and both Gilmore and Jackson will cost a pretty penny. Plus, Gilmore is getting older. My best guess is that they’ll re-sign one of Gilmore or Jackson while throwing resources at the position next offseason. Drafting a first-round corner in the 2022 draft is in play.

Could this be the year N’Keal Harry makes any type of impact?

It’s too early to tell if Harry is just having a few good practices or has legitimately turned the corner. I also don’t know what his progress means for the Pats’ secondary, which is another reason why I’m concerned there. Harry is lighter, tried to add more “wiggle” at the top of his routes in the offseason, and is way more decisive with his movements. He still has the size to win in contested situations, but he’s separating more on his horizontal breaks (slant, digs), which is where we see the most improvement. He caught an in-breaker from Jones during Thursday’s practice where the rookie QB hit him in stride, and Harry was off to the races. We never saw that in Harry’s first two seasons. Setting up his vertical routes with respectable horizontal breaks would be a huge development for Harry’s game. If he is effective on those routes against starter-level cover talent, then I’ll start believing.

Who is the most improved player in training camp from day one until now.

Harry or Jones are the easy answers here, but one of the bright spots in the secondary is Dugger’s improvements in coverage. He has his fair share of losses against Hunter Henry and Jonnu Smith, but he’s getting closer and tighter to his man with every practice. By the end of the season, he could be a legit tight end stopper in the passing game.

Which rookies (aside from Jones) are already jumping out at you and how?

Despite a recent injury, Barmore is the easy answer. He looks like a stud in the making; explosive movements, effective with multiple rush moves and from different alignment. He even had some solid reps as a two-gapper in the first padded practice. Barmore is the total package if he can put it all together.

How do you see the battle for snaps between Meyers and Bourne unfolding?

Tough question to answer because both Meyers and Bourne deserve playing time. I’d like to see Agholor at the Z spot some so he can run deep crossers from inside alignments. We could see Bourne taking reps as the X to move Agholor around. He doesn’t have the speed of a true X, but he snaps off his breaks on hitches, comebacks, and stop routes with a good feel for the sideline and very strong hands. Meyers wins more horizontally to the line of scrimmage on intermediate crossers and slants underneath, while Bourne is a better vertical route runner. Both will play a ton, and it’ll likely come down to matchups and game plans.

Who is going to move the chains on 3rd down? Edelman isn’t walking through that door Ev.. Keep up the great work

I’m honestly not concerned about the Pats’ receivers. Agholor looks like a legit field-stretcher, Jonnu is an explosive beast with the ball in his hands, and I think they have chain movers in Henry, Meyers, Bourne, and James White. Quarterback play will be the only thing holding this passing game back.

Is Damien looking like the starter in the backfield?

I’ll continue to say the same thing with the Pats’ RBs: Damien Harris and Sony Michel will both be factors. Harris looks great, and I love how he seems just to glide when he gets in the open field. But Sony is a tad more explosive and is also practicing well. They might favor Harris a bit, especially in high leverage situations, but I don’t think he’ll dominate the carries.

Taylor is having a quiet camp and has yet to stand out at all. However, running backs coach Ivan Fears mentioned that Taylor is more of a game player than a practice player. I think he’ll pop in the preseason games. He was looking better in Thursday’s padded practice. Just nothing special.

Where tf is Wino?

Winovich is in the facility daily and is working his way back. It is taking longer than I expected, though. I still think there’s a role for him on this team, but he’ll need to get back before the joint practices in Philly, or his status for the start of the season gets dicey.

It feels like we’ve seen NFL coaches tailoring their offenses to the rookie QB’s by bringing some of their college playbook to their offense. The Alabama offense was unstoppable last year. Do you see the coaching staff implementing some of that scheme with Mac?

We haven’t seen any Alabama elements yet, but as I wrote after they drafted Mac, I’d expect them to install an RPO package when his time comes. No, you don’t need a mobile QB to run RPOs. These are handoff or pass options—basically, glorified play-action. Jones averaged over 11 yards per attempt on Alabama’s RPOs in his final season there.

Prediction for the 2 minute drill starting offense by the end of the season. Which formation and players? The go to line up when you have to score.

I’m waiting to see how crafty McDaniels will get with Jonnu Smith because the “02” package is juicy. Agholor, Bourne, and Meyers are your wide receivers, with Smith and Hunter Henry at tight end. Smith can play out of the backfield, so you don’t lose that element. James White will be in for one of the wideouts in 12-personnel. I’m not ready to elevate Harry yet.