Lazar’s Minicamp Observations: Cam Newton Ends With His Best Practice of the Spring 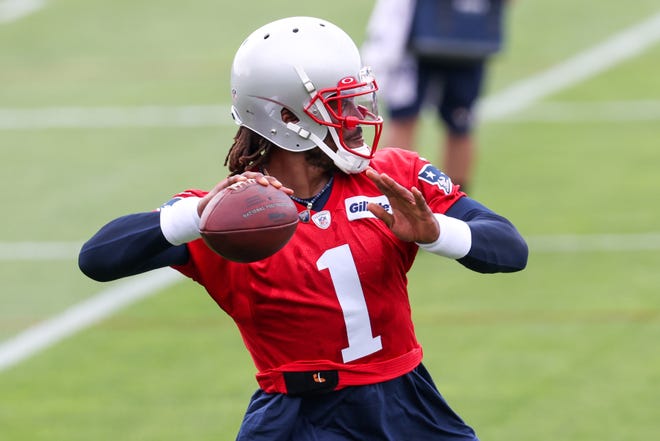 Foxborough — the Patriots wrapped up their three-day mandatory minicamp with a two-hour practice session on the training camp fields behind Gillette Stadium on Wednesday.

At the end of practice, Patriots head coach Bill Belichick sent research director Ernie Adams off in style with a salute from the entire team. Belichick and Adams confirmed that Wednesday’s practice was Adams’s final day with the team as he heads into retirement.

To put a bow on minicamp, the overarching theme was heavy pressure on the quarterbacks.

Whether that was by design, a testament to a potent group of pass rushers, or both, the defensive coaches didn’t hold back while dialing up blitzes, and different pressure looks that led to plenty of heat on the Patriots’ passers.

In particular, second-year linebacker Josh Uche and rookie Christian Barmore consistently got into the backfield over the last three days. For Uche, the pressure started in OTAs.

The Patriots’ defense will now need to carry over a strong spring into the padded practices in training camp, but this group looks poised to harass opposing quarterbacks all year long.

Here are six more observations from the final day of minicamp, which was our last look at the team until training camp begins at the end of July:

If there are bounce-back days in June, starting quarterback Cam Newton had one of those on Wednesday. Newton went 17-of-21 during team drills and had a much sharper overall process in terms of timing in the passing game. Newton’s accuracy was much better, too, as he consistently put the ball in catchable areas for his receivers, capping off the practice with two solid runs of 11-on-11s. The highlight throws came on a dig route against an out-leveraged defender to Jakobi Meyers and a deep wheel route to James White with Kyle Van Noy in coverage. After rookie quarterback Mac Jones’s strong first two days, it was Newton who was the best quarterback on the field on day three. From this vantage point, the competition in training camp between Newton and Jones will still be very real, but Newton remains the frontrunner to start in Week 1.

For the first time this spring, we saw noticeable frustration from the first-round pick on Wednesday. Jones completed just three of his final ten passes with an interception to Dee Virgin, but it was his mental struggles throughout that stood out. The Pats began implementing motion into their offensive structure on Wednesday. However, Jones had some issues setting the protection and making post-snap sight adjustments to his receivers’ routes right from the jump in walkthroughs. Towards the end of practice, Jones had a long conversation with offensive coordinator Josh McDaniels and center David Andrews about the protection breakdowns.

It wasn’t all bad for Jones, though, who opened team drills with a laser into a tight window during red-zone work to Kristian Wilkerson as Wilkerson ran down the back of the end zone. The touchdown had his teammates and coaches excited, including Newton. Jones also delivered a good ball to tryout receiver Devin Ross on a crossing route in 11s and threw a catchable go ball to Gunner Olszewski after reading the single coverage pre-snap that Olszewski dropped (it might’ve been DPI on D’Angelo Ross). On the one hand, nobody wants to hear that Jones struggled, but he seemed like his own harshest critic, which is what you want from your future starting QB.

3. QB Jarrett Stidham Gets More Reps Towards the End of Practice

I’m not going to allow myself to buy any Stidham stock this offseason, but he did see an uptick in opportunities once Jones started to struggle and hasn’t looked bad in these practices. On Wednesday, he finished 10-of-14 with a strike to Ross on a “burst” corner route and pulled the string on a fade to give Kendrick Bourne a chance, but Justin Bethel put up enough resistance to prevent Bourne from adjusting to make the catch. Getting a read on Stidham is difficult. Outside of Hoyer, he’s arguably the most comfortable quarterback in the system heading into year three. But it’s also crystal clear that Newton and Jones are the Patriots’ guys, with Stidham as the #3.

Anderson is such a Patriots D-Lineman in his build, the way he moves, and his versatility to play up and down the line. He forced Jones to roll out of the pocket by softening the edge against Isaiah Wynn and turning the corner and fits in well as an early-down run defender. The veteran had a strong showing in spring practices, and if that continues, could start in New England’s base defense. The Patriots struggled to fill their weak side DE spot opposite of Lawrence Guy last season. Now, they might have filed that void with Anderson.

5. RB Rhamondre Stevenson Has a Ways to Go in Rookie Season

Like any rookie, Stevenson is trying to stay afloat in these early days of his NFL career. But his lack of reps in team drills and an early yank by Ivan Fears in walkthroughs tell me that he’s still trying to figure things out. The only reason I’m bringing it up is that the Pats are reluctant to put rookie running backs on the field, to begin with, and Stevenson, like Damien Harris and J.J. Taylor, is in a similar spot. Of course, a lot can change between now and the start of the season. Plus, without pads and contact, these are mental reps for running backs, not live run-game drills. But it’s trending towards a slow buildup for Stevenson rather than an immediate role, especially with how good Brandon Bolden looks coming off his opt out.

With Stephon Gilmore’s ongoing holdout, the giant void opposite J.C. Jackson due to Gilmore’s absence is looming large. Jalen Mills had a nice day two and appears to be the next man up, but I remain committed to my opinion that Mills is best used as a swiss-army knife that moves around the secondary rather than a full-time outside corner. Behind Mills, the options are few and far between. Michael Jackson was okay but gives you pause as a regular contributor, while 2019 second-round pick Joejuan Williams needs to show us something in training camp, or he might be on the outside looking in. Even with Gilmore, Jason McCourty, who is now in Miami, played 65% of the snaps last year as the third corner. The Pats might have their #3 in Mills, but there’s not much depth behind him.