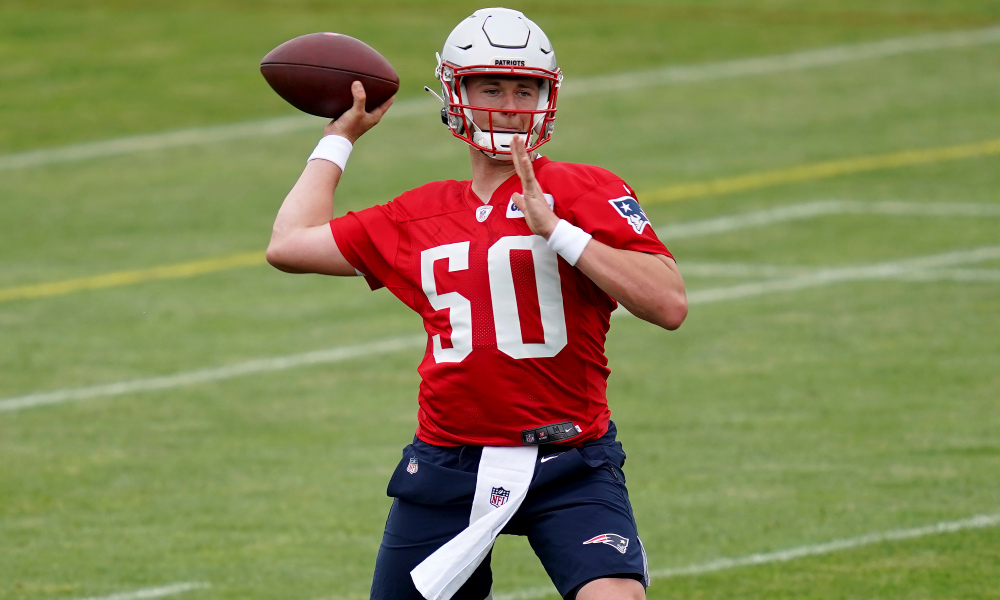 Foxborough — The Patriots opened mandatory minicamp with a two-and-a-half hour practice session in rainy conditions at Gillette Stadium on Monday.

New England practiced without star cornerback Stephon Gilmore, who is both rehabbing from a partially torn quad and potentially holding out due to contractual reasons.

The former Defensive Player of the Year is set to make a shade over $7 million in the final year of a five-year contract, which is a considerably lower number than the top players at the position. Gilmore would like to remain with the Patriots by signing a contract extension, but the two sides have yet to bridge a sizable gap in negotiations, per a league source.

Along with Gilmore, the Pats practiced without Chase Winovich, Terez Hall, Byron Cowart, and Ra’Shod Berry, with Patriots head coach Bill Belichick mentioning that travel delays led to some players failing to arrive on time for minicamp.

As far as the players in attendance, starting quarterback Cam Newton was a full participant with no limitations after an injury scare to his throwing hand during the second week of OTAs.

Following Newton in drills was rookie quarterback Mac Jones, whose participation in practice put him noticeably ahead of third-year backup Jarrett Stidham and veteran Brian Hoyer.

Jones, from this view, had his best practice out of the four sessions open to the media during the offseason program, going 13-of-20 in team drills with several downfield completions.

Lastly, Monday’s practice was free-agent addition Jonnu Smith’s first with the Patriots. Although Smith’s practice ended early due to an apparent injury, he moves like a wide receiver with great speed and explosiveness for a player of his stature. Smith may not have been at voluntary OTAs, but he looks ready to go, assuming today’s injury is nothing serious.

Here are eight other observations from the first practice of mandatory minicamp in Foxborough:

In his post-practice zoom call, veteran Brian Hoyer summed up what Mac Jones is up against perfectly. Hoyer spoke about how, as a quarterback, you have to know what all five receivers are doing on any given play, how the protection is blocking, and then react accordingly to any post-snap movement by the defense to deliver the ball correctly. All those moving parts explain any struggles in these early stages, but Jones is starting to make progress.

On Monday, Jones showed more confidence and a willingness to push the ball downfield. The Pats’ first-round pick completed downfield passes to Jakobi Meyers (back-shoulder fade), a crosser to Kristian Wilkerson, and a middle-read or seam route to Gunner Olszewski. Jones read the post-safety carrying Isaiah Zuber’s post route and correctly took the intermediate shot to an open Wilkerson on a post/crosser combination. Then, he led the offense into field goal range during a two-minute drill late in practice with a nice in-breaker to Olszewski to get the drive started. Those are the types of downfield throws that Jones wasn’t necessarily making during OTAs, but as he becomes more decisive, the rookie is showing signs of improvement.

After an injury scare in the second week of OTAs, starting quarterback Cam Newton was a full participant in Monday’s practice. Newton went 12-of-20 during team drills with good velocity on passes to Hunter Henry and N’Keal Harry. On the throw to Henry, Newton zipped the ball into his tight end on a corner route in the cover-two hole between J.C. Jackson and Devin McCourty along the left sideline. Without a real pass rush, evaluating Newton’s lower-body mechanics and footwork would be premature. His timing is improving in the offense, but his throwing motion is still the old Cam, as expected. As Belichick says, minicamp isn’t an evaluation period, but Newton isn’t doing anything to lose the starting job. If anything, it feels like Newton’s job would only be in jeopardy if Jones’s development takes off in the coming months.

With Smith appearing in his first practice, offensive coordinator Josh McDaniels didn’t waste any time getting him reps with fellow tight end addition Hunter Henry. The Henry and Smith duo was already a thing on Monday, which isn’t a major surprise. With second-year tight end Devin Asiasi having a solid spring, it wouldn’t shock me if we see three tight ends on the field at times. It’s going to be a TE party in New England.

With Stephon Gilmore absent, the lone weak spot in New England’s defense appears to be at outside corner opposite of J.C. Jackson. All of that goes away if and when Gilmore returns, but what happens if there’s an injury to New England’s top two corners? Free-agent addition Jalen Mills is taking the lion’s share of reps there. Still, Mills struggled mightily as an outside corner in Philadelphia before moving into a Patrick Chung-like role with the Eagles. Second-year Patriot Michael Jackson Sr. is also factoring in at that spot. Jackson had tight coverage on Nelson Agholor on a deep route that led to an incompletion, while Mills was a bit shaky, and Joejuan Williams remains somewhat MIA. It’s not ideal to start Mills or Michael Jackson if Gilmore or J.C. Jackson isn’t available. They could use another veteran at outside corner.

After a long look at Harry on Monday, I confirmed with a source that the Pats wideout slimmed down this offseason. My source described a “big time” weight loss for Harry, who looks noticeably slimmer and lighter on his feet. No, we haven’t seen it translate yet into explosive plays during team drills, and yes, it’s a possibility that it means nothing at all. But Harry is trying to pick up the pace and improve his speed, which was his biggest issue in his first two seasons.

Despite Harry’s weight loss, it already feels like the Patriots have their top three receivers figured out. Agholor’s speed is testing New England’s secondary in practice, and although he didn’t haul in any deep balls on Monday, he came close a few times but struggled with the rain. Bourne has excellent body control and strong hands to snatch the ball outside his frame. He contorts his body and adjusts with ease while aggressively attacking the football in the air. Bourne’s catch radius and ability to finish through contact is something the Pats missed last season. As for Meyers, the third-year wideout continues to impress this spring, picking up where he left off last season. Things can change between now and the start of the regular season, but barring injury, it’s hard to envision anyone surpassing Agholor, Bourne, and Meyers on the depth chart.

6. Pats’ Starting Offensive Line is Whole For the First Time

With Isaiah Wynn appearing in his first practice of the offseason, we got our first look at the Pats’ starting offensive line in practice. You can expect to see, from left to right, the following starters: Isaiah Wynn, Michael Onwenu, David Andrews, Shaq Mason, Trent Brown. Although, veteran backup Ted Karras might factor in as well. Karras is the teams’ top interior backup and is good enough to start in the league.

7. DT Montravius Adams in the Mix on the Defensive Line

It’s hard to evaluate defensive linemen during a non-padded practice, but Adams’s involvement was notable. The under-the-radar free-agent signing is getting his fair share of reps and has the inside track to a role as a situational pass-rusher. With rookie Christian Barmore in the development stages, Adams could replace Adam Butler for the time being until Barmore is ready.

8. Bill Belichick Pouring it On Despite Rainy Conditions

Despite the pouring rain, the Pats’ head coach still walked up to long snapper Joe Cardona and holder Jake Bailey for an extra squirt of the water bottle on the kicking ball before Nick Folk and Quinn Nordin attempted field goals at the end of practice. Belichick is known for simulating rainy conditions by soaking the football in water, and even the wet conditions weren’t enough today.