Lazar’s Minicamp Observations: Mac Jones is Setting Up a QB Competition This Summer 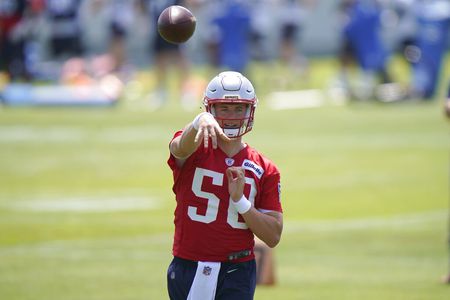 Foxborough — the Patriots held day two of mandatory minicamp in significantly better weather conditions on the practice fields behind Gillette Stadium on Tuesday.

Once again, New England practiced without star cornerback Stephon Gilmore, who is not expected to attend the three-day minicamp, according to head coach Bill Belichick.

Chase Winovich, Terez Hall, Byron Cowart, and Rashod Berry were absent for the second consecutive day as well, while tight end Jonnu Smith was a spectator after suffering an injury on Monday.

Three interceptions by the defense and a noticeable uptick in snaps for rookie quarterback Mac Jones compared to Cam Newton highlighted the two-hour and 15-minutes session.

Although it’s way too early to make any final determinations, Jones, who is more accurate and features a quicker release than Newton, is gaining traction to set up a true quarterback battle in training camp.

Jones is starting to out-rep Newton in these practices. The rookie opened team drills with a terrific red zone period, where he threw three touchdowns to three different receivers. First, he hit Hunter Henry on a stick-nod route up the seam by elevating the pass over the coverage, allowing Henry to climb the ladder. That was followed by touchdowns to Devin Asiasi (with Adrian Phillips in coverage) and Matt LaCosse (against Kyle Dugger) on quick-hitters for six. Then, in 11s, Jones’s best throw came on a purposely low completion to Nelson Agholor. J.C. Jackson had tight coverage on Agholor, who ran a comeback route along the sideline, and Jones threw it low and away from Jackson to give Agholor a clean chance.

However, two of his last three passes of competitive team drills were intercepted. Jones tried to loft a throw over Dont’a Hightower to Dalton Keene, but the veteran linebacker showed off his hops to pick it off, and the second INT was a batted pass at the line that fell into Kyle Van Noy’s lap. Still, Jones continues to push the ball downfield more and more with each practice, and you see the growing confidence he has in throwing into passing windows available to him. Using the spring as a foundation, Jones will have a real shot at starting if he continues to progress at this rate.

Back-to-back days of accuracy issues for Newton suggest that his injured throwing hand might be a factor. Ultimately, though, Jones is already breathing down Newton’s neck, and the results will need to come eventually. On Tuesday, Newton went 9-of-17 during competitive team drills, airmailing a pass to Hunter Henry on a deep crosser and missing an open Kendrick Bourne badly on a comeback route along the sideline. We can caveat everything with it’s too early to tell in a non-padded practice, but Newton’s accuracy and timing in the offense just aren’t where they need to be, especially with a first-round pick now on the roster. It’ll be interesting to see where things stand in Bill Belichick and Josh McDaniels’ minds come training camp.

3. QB Jarrett Stidham is the King of 7-on-7 Drills

Look, 7-on-7 isn’t real football, and playing quarterback without a pass rush is much easier. With that said, Stidham has moments where he’s lighting it up in 7-on-7, with great downfield ball placement the last two days on deep shots and a few lasers over the middle to Gunner Olszewski and rookie wideout Tre Nixon on Tuesday. He has made two competitive deep throws to Nelson Agholor the last two days that were perfectly placed but fought off by tight coverage or dropped. I’m not sure it means anything since we are compounding a spring practice setting with drills that don’t feature a pass rush, but it’s worth noting that Stidham looks the most comfortable in 7-on-7 out of the four quarterbacks right now.

In case there were still doubts, Hightower is back, and his post-practice comments suggest there’s no reason to fear retirement, as does his play on the field. Hightower is right back in the middle of New England’s defense making plays, with an interception as the highlight of Tuesday’s practice. Hightower faked like he was going to join the rush, then dropped into coverage, and Jones never saw him. Hightower’s interception was smooth, he’s moving well, and he’s not retiring; great news all around for the Patriots’ defense.

Although the Patriots signed two tight ends in free agency, the 2020 third-round pick is holding his own this spring. Asiasi’s coaches applaud his route detail throughout these practices, mainly hitting his landmarks and coming out of his breaks at the proper depth. For example, Asiasi made three smooth catches around the goal line, breaking off quick-outs underneath the defense. Will the Patriots unveil a three-tight end package? Will Asiasi be in a rotation with Henry and Jonnu Smith? It’s too early to tell. But Asiasi is setting himself up for a role on this team.

6. WR Gunner Olszewski Starting to Get Open in Team Drills

As an All-Pro punt returner, Olszewski is already a roster lock. But the more you can do, the more valuable you are to Bill Belichick. I’m reluctant to say that Olszewski is on the Troy Brown, Wes Welker, Julian Edelman trajectory where he’s going to develop into a great slot receiver and returner. But Gunner keeps making plays in live team drills. On Tuesday, Olszewski dusted cornerback D’Angelo Ross on a crossing route where an explosive route break caused Ross to fall to the turf. If the parallels between Olszewski’s career and Edelman’s continue, then this would be the year where he starts to make an impact as a receiver.

Mills appears to be the next man up at outside corner if the Patriots can’t solve Stephon Gilmore’s contract dispute, which has yielded mixed. But, to his credit, Mills turned things around with an extremely active day around the ball on Tuesday. The new Pats DB nearly intercepted a Cam Newton deep ball ranging over the top as a deep safety, broke up a pass at the goal line, and then had tight coverage on Isaiah Zuber’s go route to force an incompletion. Patriots captain Devin McCourty spoke about Mills’s versatility as an asset to the secondary after practice. Although he’ll have his ups-and-downs as an outside corner, Mills could thrive in this defense as a jack of all trades.

We are going on five practices now where Jakobi Meyers is a targets machine. Meyers’s work underneath the defense and at the intermediate level is standing out every day. He has an excellent feel for route pacing, syncing his steps up with the play’s timing. For example, during a 3-on-2 period where the defense had three players in coverage against two receivers, Meyers ran a slick quick out of a stack formation with Nelson Agholor pushing the coverage upfield. Meyers and Agholor ran the route so well that it was nearly indefensible. Even with the additions of Agholor, Kendrick Bourne, and the two tight ends, Meyers will be a factor.