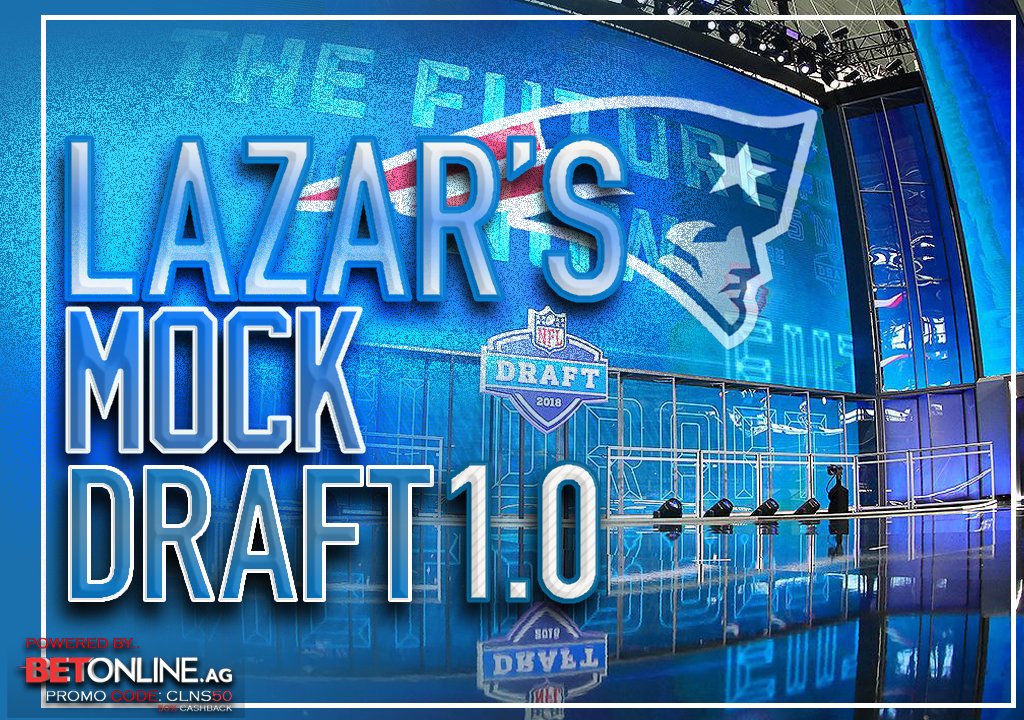 The Patriots didn’t make any splashes in free agency, but with a league-high 12 selections in April’s draft, and six coming in the first 101 picks, they can significantly improve their roster.

Bill Belichick has a war chest of draft capital, and will undoubtedly be shopping picks for trades both to move up and down this year’s board, next year’s board and even acquire veterans.

Here’s an initial stab at a seven-round mock draft:

Tillery is becoming a popular pick for the Patriots in the first round in what has become a three-horse race between the Notre Dame product and Clemson stars Dexter Lawrence and Clellin Ferrell. The Pats grab Tillery this time who fits their defensive line mold to a tee. He’s long (6-6 with an 81-inch wingspan), athletic (84th percentile in SPARQ) and disruptive grading out as Pro Football Focus’ highest-graded pass rusher in the nation on the interior defensive line. Tillery has above-average first step quickness, but his hand placement and technique along with his length make him unique. For the Patriots, he can line up anywhere on the defensive front and play in both odd and even fronts making him a perfect fit in Bill Belichick’s defense.

Samuel would be an immediate contributor in the slot with the potential to take over the “Z” receiver role from Julian Edelman in the future. He bursts off the line with tremendous explosion creating early separation while challenging secondaries with 4.48 speed, and has the versatility to play both inside and outside. Plus, he’s one of the best receivers after the catch in this class with elite vision in the open field and a thick frame making him difficult to tackle for smaller defensive backs. According to Pro Football Focus, Samuel broke 21 tackles on his 62 catches this past season. The Patriots also need to improve in the red zone, and eight of Samuel’s 11 touchdown catches came in the red area a year ago, a rarity for a smaller receiver. Add in value as a kick returner, and he’d make an instant impact.

The Patriots get their tight end of the future. After Sternberger, the high-quality players at the position run out quickly, so they should make their pick early. The Texas A&M stand out had 21 catches for 20-plus yards for the Aggies in 2018, the second-most in a season for a player over the last 15 years. Furthermore, he did most of his damage up the seam and averaged 8.3 yards after the catch (led SEC). Sternberger has a ways to go as an in-line blocker but has the frame to take on more muscle, and the Pats will coach up his technique. A big-bodied tight end that tortures teams up the seam and creates for himself after the catch? Sounds like a Patriots tight end to me.

If the Patriots can land Nelson in the third round, which is starting to sound like a real possibility, they got themselves a steal. From a pure body type standpoint, Nelson is built a lot like former Pats defensive end Chandler Jones with freakish height (6-7) and arm length (nearly 35 inches). Nelson isn’t as explosive as Jones off the ball, but he tested in the 92nd percentile in the three-cone drill (6.95 seconds) at the combine, and that short area quickness shows up on tape. Size and length, short area quickness, strong fundamentals (leverage, pad level) and a high motor sum up Nelson’s game. If Nelson is off the board, the Patriots could also go with Miami defensive lineman Joe Jackson with this pick.

Wesley is more of a “my guy” pick than it is a perfect fit in the New England offense. However, the Patriots desperately need some height at the wide receiver position, and Wesley is a nuanced route runner for a six-foot-four receiver. His ability to sink his hips in his breaks to change directions at his height is a rare trait, and he glides past defensive backs with long strides and above-average tracking skills. The Pats landed a future “Z” in Deebo Samuel earlier; now they get a natural “X” receiver in Wesley. The Patriots could also target Ohio State’s Terry McLaurin on day two whose more their type of a receiver and is a standout on special teams as a gunner on punt coverage.

The third round is early for Scharping, but it’s too tempting to test fate for another 33 picks to the Pats’ fourth-round selection. Maybe that means a trade down at this spot is in the cards. Nevertheless, Scharping has surrendered one sack in the last three years to MAC competition and has an extremely high football IQ. He’s not the most athletic prospect, but his technique is nearly flawless for a college tackle as his understanding of angles and leverage. Scharping has experience playing both left and right tackle as well meaning he’ll fit right into a swing tackle role with the potential to start at either tackle spot down the road.

Amadi’s drill work at the combine put him on my radar. He’s an incredibly smooth athlete with an uncanny ability to flip his hips in his backpedal and turn out into a sprint. Amadi can play deep, in the box or the slot and is a natural coming downhill. At Oregon, he was voted a permanent team captain by his teammates as a vocal leader on and off the field making all the secondary calls in his final season. His size (5-9, 199 pounds) is the only major concern.

The Patriots are one of a few teams that still likes old-school thumpers at linebacker, and that’s what Lamar brings to the table. He’s a monster at six-foot-three and 253 pounds and will clog running lanes to improve your run defense. Bill Belichick would love to snag Lamar in the sixth round.

Dortch is tiny (5-7, 173 pounds), but his size is the only reason he’s still on the board. He told me at the combine that he models his game after Seahawks wide receiver Doug Baldwin, and that makes sense based on his route releases. Like Baldwin, Dortch has terrific footwork to set up defenders to blow by the coverage at the top the route. He’ll push Braxton Berrios as the Patriots’ next full-time slot receiver, and also adds value as a punt returner.

The Patriots add another tight end late in Wesco whose an extremely versatile blocker. The West Virginia coaching staff used Wesco as a featured blocker in their running game, and it’s possible that he could produce more in the passing game with an expanded role.

Pollard is the pick here for two reasons; kick returns and catching passes out of the backfield (104 career catches). Pollard’s seven career kick return touchdowns tied an NCAA record, and his 30.5 return average is fifth all-time. Cordarrelle Patterson is gone, and Pollard is the solution.

Yes, another Rutger safety to wrap up the draft. Hampton was a team captain and leader for the Scarlet Knights and played both safety and corner on defense on top of being a core special teamer.