Lazar’s Most Important Patriots in 2021: No. 7, David Andrews 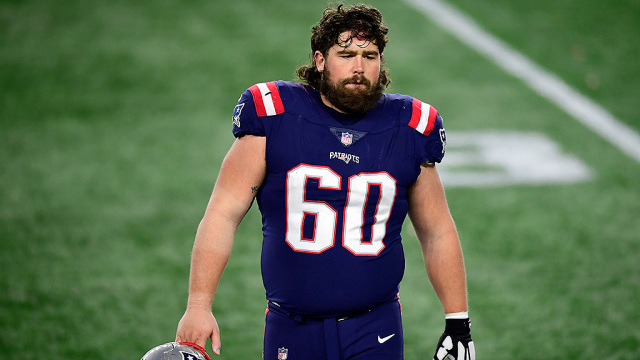 FOXBOROUGH, MASSACHUSETTS - DECEMBER 28: David Andrews #60 of the New England Patriots walks off the field after a 38-9 loss to the Buffalo Bills at Gillette Stadium on December 28, 2020 in Foxborough, Massachusetts. (Photo by Maddie Malhotra/Getty Images)
Share
Facebook Twitter Email

Patriots offensive line coach Carmen Bricillo startled his wife with a late-night fist pump after receiving a text from his boss, Bill Belichick, in the height of NFL free agency.

The text from Belichick was to inform Bricillo and co-offensive line coach Cole Popovich that the team had re-signed starting center David Andrews, an unrestricted free agent, “having him back on the team and on the offensive line, I think that’s huge,” Bricillo said.

“What he does on the field is critical. But the things he does off the field in our building, working with our young guys, helping everybody, coaches included, and then in the community. So, all of that is critical.”

Andrews is undeniably the leader of New England’s offensive line and is as valuable as ever due to his six years in the system now that the team is transitioning to a young quarterback.

The Pats’ center’s comfortability with setting MIKE points and protections makes life easier for quarterbacks. His toughness and grit set the tone, and even in a bit of a down year, the two-time Super Bowl champ still graded out in the top half of the league at the position.

Along with what he brings to the table from a mental and leadership standpoint, Andrews is also a very athletic center who can reach and turn out defensive linemen.

Here, Andrews reaches the shaded nose tackle aligned over his outside shoulder to the play side. Despite being out-leveraged at the snap, Andrews turns Ravens nose tackle Justin Ellis out of the hole, allowing the left side of the line to block down on the outside zone toss.

In honor of David Andrews's birthday here are some of his best blocks from last season. #Patriots pic.twitter.com/apaQPpAWty

Andrews is also very capable of getting out in front of ball carriers on screen passes. Designs with the center releasing out to block often get the interior defensive linemen sucked into the rush, which gives more room for ball carriers in the open field.

In a 2017 press conference, Bill Belichick went into detail about the challenges of playing center and all the responsibilities.

“It’s a little bit different than the other four because of the snapping and the communication, identification of the fronts, and adjustments,” Belichick said. When you play center, you’re right in the middle of every play. There’s no play that doesn’t involve the center or his block.”

“A lot of it has to do with blocking angles and how to get the most favorable position of our five guys against their five guys. A lot of the time, it’s the center’s job to either make a call or coordinate it. David’s good at all those things.”

After inking Andrews to a four-year deal worth a total value of $19 million this offseason, Belichick and the Patriots made it clear that they feel secure with Andrews handling a complex position.

According to a league source, Andrews turned down more money elsewhere to remain with the Patriots during free agency, so the feeling is mutual.

New England experienced life without Andrews when he was forced to sit out the 2019 season, and based on his new contract, the Pats don’t want to go down that road again any time soon.