The Pats can't afford to lose their top slot corner again this season. 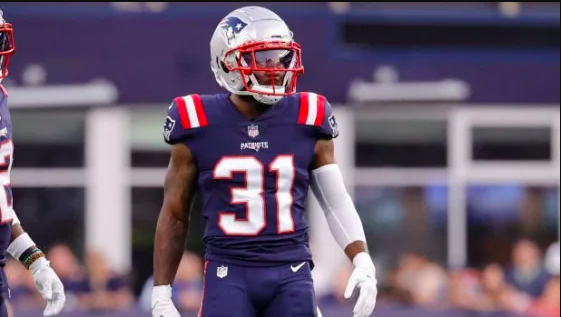 As Joni Mitchell and the Counting Crows once said, you don’t know what you got ’till it’s gone.

Although astute observers knew his value before, Patriots cornerback Jonathan Jones’s absence from New England’s secondary became a major factor as the season wore on in 2021.

The Pats adjusted their coverage game plans following a season-ending shoulder injury for Jones in Week 6, featuring more zone coverage schemes to protect backup slot corner Myles Bryant, who was elevated to the starting role after the Week 6 loss to the Cowboys.

New England’s adaptations, along with solid play from Bryant, sparked a seven-game winning streak. However, the drop-off from Jones to Bryant began to show eventually, culminating in the Bills’ speedy wideout Isaiah McKenzie’s back-breaking performance in Week 16, essentially sealing the division for Buffalo on 11 catches for 125 yards and a touchdown without Jones manning the slot.

The Patriots drafted third-rounder Marcus Jones in an attempt to upgrade their depth at slot corner. They were also trying out Shaun Wade inside during the spring, but taking Jones out of New England’s secondary for a second-straight season would be a significant blow to its defense. 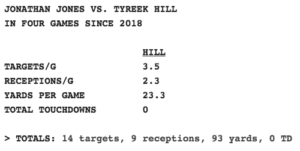 During battles when Hill was a member of the Kansas City Chiefs, the Pats often matched speed-on-speed with Jones as the primary coverage defender on Hill. The Pats’ veteran cornerback held the six-time Pro Bowler to nine catches for 93 yards and zero touchdowns in four games since 2018.

Jones, who has a track and special teams background, has the top-end speed and open-field tackling abilities to stick with Hill, the fastest receiver in football.

When healthy, Jones is one of the league’s top cover corners out of the slot, who also can handle hefty run responsibilities in the nickel role and drop back to safety on occasion.

The Patriots will rely heavily on Jonathan Jones to return to form this season.