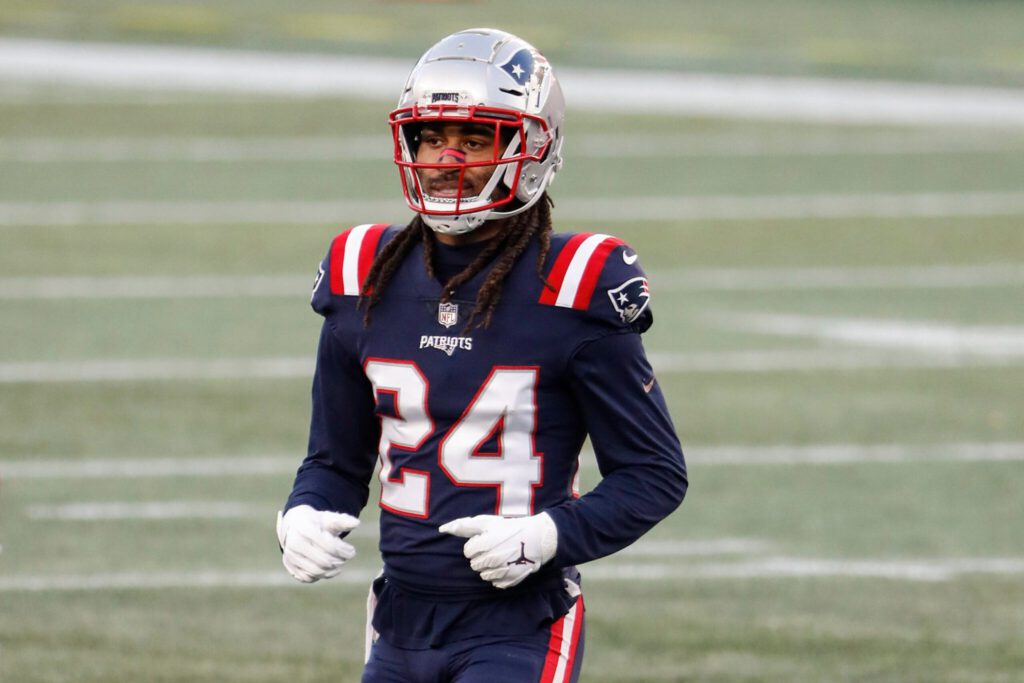 When it comes to cornerback Stephon Gilmore’s value to New England’s defense, the proof, as they say, is in the pudding.

Basing it on numbers, eye tests, or pure common sense, the Patriots’ defense is substantially better with Gilmore in the lineup than it is without the 2019 Defensive Player of the Year. 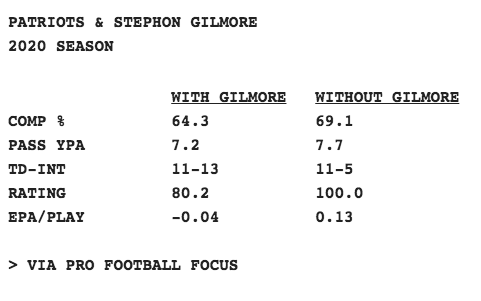 Last season, Gilmore missed five games due to a quad injury that required offseason surgery. In those five games without their star cornerback, New England’s pass defense’s statistical output plummeted with their expected points added (EPA) dropping from -0.04 to 0.13 per play.

Furthermore, the Patriots allowed a passing touchdown on nearly six percent of the opponent’s pass attempts compared to a touchdown rate of 3.4 percent when Gilmore was healthy.

The staggering statistical trends paint a clear picture of a substantially better defense with its All-Pro cornerback in the fold, and as you’d expect, the tape produces the same results.

Due to an excellent combination of size, athleticism, technique, and football instincts, Gilmore is a true lockdown man coverage machine who can take the league’s top receivers on an island.

#Patriots film: things you can do when you have Stephon Gilmore. That's him at the bottom of the screen against Sammy Watkins. Safety on the far hash to the trips side. Gilmore island. pic.twitter.com/IyKd6bSabD

New England uses Gilmore’s shutdown coverage skills to play most of their defensive snaps with a single-high safety. Since Gilmore doesn’t need much help over the top, the Pats are free to insert another player into the box in run support or as a blitz threat. In matchups where Gilmore has a clear advantage, like against former Chiefs wideout Sammy Watkins above, they can even shade the deep safety towards the other side of the field.

In this rep of cover-7, Gilmore takes one of the NFL’s best route-runners, Keenan Allen, one-on-one. With Gilmore on Allen, the Patriots’ safeties are free to help on other routes. Myles Bryant comes from deep to cut off the shallow crossing route, while Jason McCourty brackets tight end Hunter Henry with brother Devin, and the Pats sack Justin Herbert.

#Patriots film: vintage Gilmore coverage rep on the fade to Hopkins. Key here is how he stays square through the release, forcing Hopkins to declare his route before Gilmore opens his hips. Stay square, don't fall for the inside fake, smother the top of the route. Textbook. pic.twitter.com/ioyL8tBO0a

Along with the flexibility Gilmore provides, he’s one of the league’s best technicians in man coverage. In this play, Gilmore is in man coverage with three-time All-Pro, DeAndre Hopkins. The Pats’ CBs patented coverage style is to remain patient at the line of scrimmage by staying square. Keeping his hips closed allows Gilmore to shadow the receivers’ initial movements until he either gets a read on the route or forces the receiver to declare his route. In other words, it’s a game of chicken, and Gilmore wants the receiver to blink first. Hopkins has to make the first move releasing on a fade, and Gilmore smothers it.

“It’s no secret, it starts with Steph,” defensive captain Devin McCourty said. “He goes out there, competes his butt off. Every time someone makes a catch on him, it’s going to be highly contested. They’re going to have to make a great play.”

As Gilmore’s contract holdout continues, Patriots head coach Bill Belichick knows better than anyone how valuable his number one corner is to his defense.

Belichick wants to play heavy doses of man coverage, often with a single-high safety. New England’s success in those coverages is predicated on having Stephon Gilmore in the lineup.

Belichick rarely blinks in contract negotiations, but Gilmore appears to have the upper hand.