Lazar’s NFL Combine Preview: Wide Receivers to Keep an Eye on in Indy for Patriots

The Patriots are searching for a top wide receiver for Mac Jones. 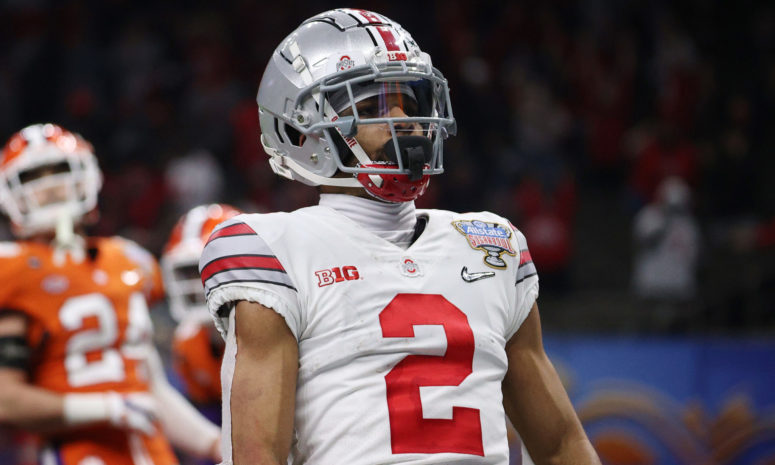 The NFL Scouting Combine is the official start to the offseason for the Patriots every year.

Although New England is always all eyes on Mobile for the Senior Bowl, the combine is where they begin speaking with pending free agents and set the table for their offseason plans.

The consensus inside and outside the building is that Bill Belichick is hunting for playmakers on defense and a top wide receiver to pair with second-year quarterback Mac Jones.

“We are going to look to get faster, more explosive, and put more playmakers on the field.” Patriots linebackers coach Jerod Mayo said during Super Bowl week.

Mayo publicly acknowledged the issues everyone saw with the Patriots’ lacking speed on defense, making it a significant point of emphasis this offseason. Internally, there’s similarly an acknowledgment that finding Jones a true number one weapon is another priority.

Luckily, the 2022 wide receiver class is loaded with prospects of all shapes and sizes, while the Pats could also add depth in other areas on offense.

Here are potential targets for the Patriots on offense that we’ll have our eye on in Indy:

– Depending on the Pats’ approach in the veteran market, adding firepower to Mac Jones’s arsenal remains a top priority. Although their shortcomings at the top of the draft are well-documented, this is an outstanding wide receiver class.

– Chris Olave, Ohio State: in my pre-combine mock draft 1.0, Olave was my selection for the Patriots in the first round with the 21st overall pick. Adding fuel to the fire is a reported meeting with New England’s brass in Indy and a connection with Olave’s agent, Drew Rosenhaus, who has several clients on the Patriots roster. The Ohio State product has excellent burst off the line of scrimmage to accelerate past corners and fluid hip transitions to snap off route breaks. Olave’s ability to smoothly change directions without wasted movements gives him immense separation potential. Now, the question is, will he still be on the board at 21? Olave’s 40-yard dash will decide if he makes it out of the top 20.

– Treylon Burks, Arkansas: Burks was a tough tape evaluation, but he is also reportedly meeting with the Patriots this week. His explosiveness as a ball carrier and athletic ability to high-point the ball downfield are elite traits. There’s a mix of A.J. Brown and Deebo Samuel in his game. However, there’s also some N’Keal Harry, with limited exposures to press coverage and some rigidness in his route breaks. His athletic testing will be critical in his final eval. If he runs in the 4.3s at 6-3, 225-plus, we are talking about a different level of speed than Harry, which will make a huge difference. It’s also worth noting that Burks was very productive in a small sample against press-man last season (334 yards, 4 TDs on 39 routes).

– Drake London, USC: some evaluators have London as a fringe top-ten selection, but I just can’t get there. He wasn’t running away from anyone in the Pac-12, a conference that isn’t exactly filled with fast corners. There’s a good chance we are talking about a receiver who is 6-5, 210-215 pounds, and runs in the 4.5s. If he has a decorated NFL career, he would be an outlier. London’s tape as a big slot was more intriguing than at outside receiver. If he breaks the 4.5s threshold, it could change my view slightly on him as a prospect.

– Christian Watson, NDSU: Watson is one of my favorite prospects in the draft. The 6-foot-5 wideout is projected to run in the 4.3s, and you see that kind of game speed on tape. As a deep threat, it was no contest for FCS cover talent. Plus, NDSU got him the football on jet sweeps and other schemed touches out of the backfield, where you can see his fluidity as an athlete. This is a 6-5, 4.3-second wideout with elusiveness and the ability to stop down quickly off his vertical stems. Watson is a fun player, and I can’t wait to see him put up a huge time in the 40.

– Skyy Moore, Western Michigan: Moore has some Julian Edelman in his movements. The way he threatens defensive backs early in the route and carries the football reminds me of JE11. His releases might be the quickest in the draft, and he’s always looking to attack leverage and set up defenders for his route breaks. After the catch, he has a slithering style and isn’t afraid of contact. There are rumors that he’ll run fast, too, potentially bringing a vertical element. A day two slot receiver worth monitoring this week. His 40 time could be eye-popping.

– Wan’Dale Robinson, Kentucky: Robinson is an intriguing prospect for Pats fans who want the team to target a do-it-all receiver in the Deebo Samuel mold. No, Robinson isn’t as big as Samuel, so he’s not going to play running back as often as the 49ers star. But he has the explosiveness and instincts as a ball carrier for schemed touches. The question with his athletic profile is long speed, as he got caught a few times from behind in the open field at UK. Robinson doesn’t project as a traditional technician from the slot since he’s still relatively new to the position, so he’ll need to produce early in his NFL career as a ball carrier.

– Alec Pierce, Cincinnati: I was late to Pierce, but I’m glad he was one of the last X receiver prospects on my list. His tape against Notre Dame last season was excellent. Smooth and sudden release package, excellent ball tracking and high point skills, great setups and route breaks on backside digs. He is a nice sleeper in a crowded outside receiver group.

– Khalil Shakir, Boise State: Don’t sleep on Shakir. He’s not as polished with his routes as Skyy Moore, but he’s got similar shiftiness before and after the catch. With Moore rising up boards, Shakir could be the early day three version. He has tape at outside receiver, slot receiver, wildcat QB, and returner.

– The Pats probably won’t draft a running back early, but a potential heir to James White makes sense.

– Kyren Williams, Notre Dame: Williams might be too high for the Patriots’ needs at running back as a projected third-round selection. However, he’s an ideal pass-catching back with option route quickness and versatility to line up out of the slot. Plus, he has excellent awareness and technique in blitz pickup. NFL Network’s Lance Zierlen used Dion Lewis as a comp.

– C.J. Verdell, Oregon: Verdell’s experience is as a zone runner, but his contact balance and lateral agility flashes in the open field. He also looks natural running routes out of the backfield and has soft hands to pluck the ball outside his frame. He could be a day three target.

– With Trent Brown heading into free agency and Isaiah Wynn slated to play on his fifth-year option in 2022, the Patriots have a long-term need at offensive tackle.

– Trevor Penning, UNI: if the Pats are thinking offensive tackle in the first round, Penning is the most likely target. He is a long, nasty, and physical tackle prospect who checks all the boxes. In other words, he’s not another undersized tackle like Isaiah Wynn. Although he finished the week strong, Penning’s redirect movements were an issue at UNI and the Senior Bowl. He has a good initial burst out of his stance to cut off the corner but can get beat inside or when he’s asked to change directions quickly. Teams will also want to talk with him about his mean streak. Some old-school evaluators will love his nastiness, but others will see him as a penalty waiting to happen. You also want a top-notch athletic profile as a small school prospect.

– Daniel Faalele, Minnesota: the entire draft community is waiting to see how well the 380-pounder moves at the combine. Faalele is the definition of a mauler, engulfing pass-rushers and moving defenders with ease in the run game. Although it’ll be fun to watch, his foot speed and athletic ability aren’t a concern. He moves well for his size. My bigger concern with Faalele is flexibility. At the Senior Bowl, he had a tough time keeping his pads down and using his length to prevent pass-rushers from getting into his chest. As a result, there were way too many instances where Faalele was getting walked back into the QB with pass-rushers getting underneath his pads. Let’s see that knee bend and hip mobility.

– Max Mitchell, UL: Mitchell was a three-year starter for the Ragin’ Cajuns and is known as a high-character prospect. Plus, he has great length at 6-foot-6 and movement skills. His ability to mirror pass-rushers and wall-off defenders in the run game with body positioning is impressive. However, he has a thinner frame and will need to add mass to handle NFL edge rushers. We’ll see if he’s already begun that process this week.

– Tyler Smith, Tulsa: Smith is starting to climb boards due to his hulking size and playing strength. The Tulsa product has cement hands and flat-out stuns defenders with his punch. He has instant people-mover potential. Although his power is evident, Smith’s hand usage is very raw, and he doesn’t always have complete control of his body when he throws his hands. Let’s see how he looks during on-field drills where they’ll make him strike and move.

– Sean Rhyan, UCLA: Rhyan is an easy study from a technical standpoint. His movements are crisp, balanced, and his hand usage is nuanced. He had multiple reps against top pass-rusher Kayvon Thibexdoux, which got you excited. However, there are concerns about hip tightness and range to play tackle in the NFL. Rhyan is a prospect who could do wonders for his stock by testing well in Indy.

– Luke Goedeke, Central Michigan: with all eyes on Central Michigan left tackle Bernard Raimann, it would be very Belichickian to take the standout right tackle instead. Goedeke doesn’t project as the high-end athlete that Raimann is, but he has better instincts and overall feel for the position. Goedeke is an interesting option in the middle rounds if he tests well.

– Abraham Lucas, Washington State: another traits-based prospect with excellent size (6-7/320 pounds), Lucas uses a quick vertical set in Washington State’s air raid scheme to smother pass rushers with his length and hand power. His movements are a bit disjointed at times, but there’s a lot to like here. Let’s see how well he moves this week.