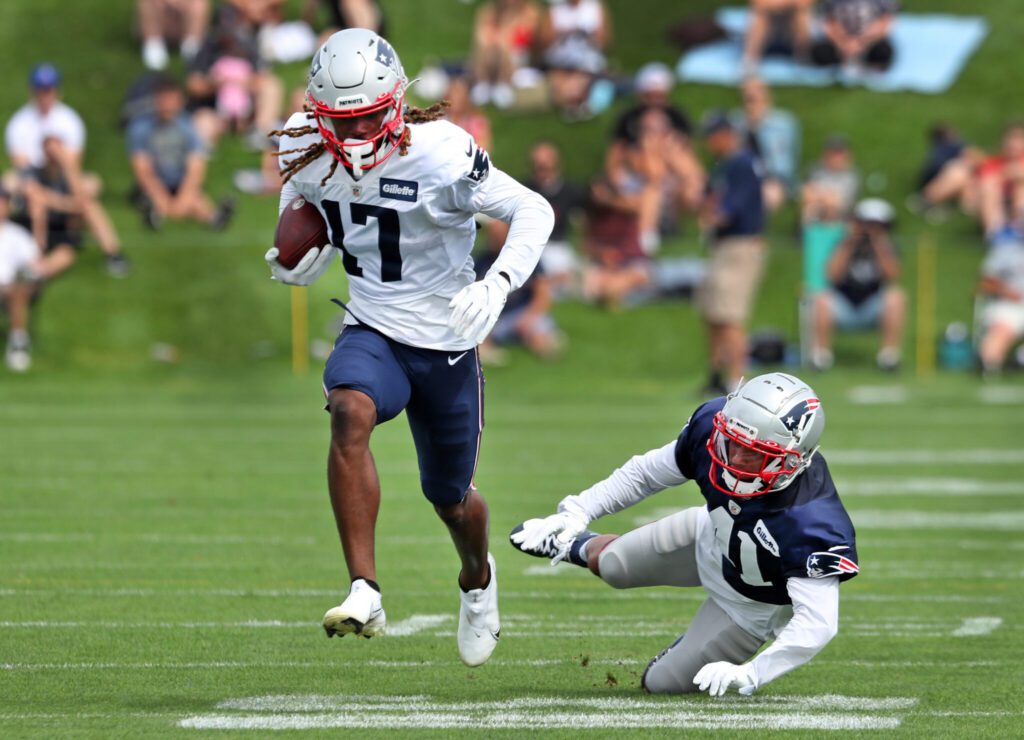 Foxborough, MA: 8-03–21: Patriots WR Kristian Wilkerson (in white) made a nice catch on a long pass play during a drill, as DB Myles Bryant (in blue) couldn't break up the play. The New England Patriots continued their training camp workouts outside of Gillette Stadium this morning. (Jim Davis/Globe Staff).
Share
Facebook Twitter Email

FOXBORO, MA — The Patriots returned to the practice fields behind Gillette Stadium for their third training camp session in full pads on Sunday afternoon.

After a day off, C/G Ted Karras, TE Devin Asiasi, DL Christian Barmore, and WR Devin Ross returned to practice. However, there were two key in-practice injuries to starters on offense.

Tight end Hunter Henry (shoulder) and center David Andrews (hand) didn’t finish practice. Henry left the session early after throwing a hard block on linebacker Anfernee Jennings that aggravated his shoulder. As for Andrews, he was a spectator at the end of practice.

Both starter Cam Newton and rookie Mac Jones had strong practices. Newton finished 12-of-13 in 11-on-11s and had the highlight of the day on a go-ball to Kristian Wilkerson. Jones was 17-of-22. The two QBs combined to go 9-of-10 in real competitive 11-on-11s.

Let’s empty the notebook from a busy day in pads for the Patriots on Sunday:

Patriots starting quarterback Cam Newton was sharp in Sunday’s practice. Newton had the throw of the day by hitting wide receiver Kristian Wilkerson down the right sideline on a go ball in stride into the end zone. Newton also showed good timing on a “leak” route on the goal line by holding the play-action fake while tight end Matt LaCosse disguised his release into the backside flat. The lone blemish was an interception by Devin McCourty when Newton threw behind Jakobi Meyers in 7-on-7 (Jones had one too). I’ll repeat the same thing I’ve said all camp: Newton’s timing and consistency in the offense are improving, and he hasn’t done anything to lose the job. Jones will need to pry it away from him.

Jones didn’t have a flashy downfield throw like Newton. Although, his pass to a crossing Jakobi Meyers in 7-on-7s was nice. During a practice period where Jones was working against starters on defense, his quick release and clean operation stood out. The Pats’ rookie hit Kristian Wilkerson (slant), Jakobi Meyers (in cut), Wilkerson again (drag), and N’Keal Harry (under) in succession, with the ball coming out in a hurry. Jones hits the top of his drop, gets to the open man in his progression, and throws with solid accuracy daily. Again, Newton isn’t losing the starting job, but Jones is progressing in a good way.

Another day at Pats camp and another day of N’Keal Harry highlights. This time, Harry beat cornerback Joejuan Williams clean on a corner route during one-on-ones and made a diving catch in the end zone for six. He also had two catches in team drills on unders/in-cuts, where he separated underneath the defense. Harry spoke after practice about how he feels faster, quicker, and more confident on the field. Those things are certainly showing, but the question remains: can Harry do it against top cover guys? It’s one thing to beat borderline NFL corners like Williams and Michael Jackson, but can he beat J.C. Jackson or Stephon Gilmore (when he returns)? If he does, I’ll start really believing in Harry’s breakout.

Patriots wide receiver Kristian Wilkerson continues to make a push for the 53-man roster. Wilkerson caught the 50-yard bomb from Newton and three more passes on quick-hitters underneath. Wilkerson’s ran away from Joejuan Williams on a slant where Jones hit him in stride for a huge catch-and-run. He even beat J.C. Jackson on an in-breaking route during 11s. Wilkerson has good explosiveness and lateral agility off the line of scrimmage. He moves defensive backs at the line with his quickness to open avenues upfield in his releases, which allows him to get upfield. Plus, he has good suddenness at the top of his routes and is working on carving out a role as a core special teamer. Wilkerson is going to be a tough cut if he doesn’t make the roster.

Patriots linebacker Kyle Van Noy was a full go in practice for the first time this summer after wearing the red non-contact jersey in the first nine practices. Van Noy was repping mostly at off-ball linebacker and was impressive. The veteran linebacker made run stops in both “inside six” and full 11-on-11s, meeting the running backs in the hole like a savvy vet. Van Noy fits right back into the Pats defense, but it’ll be interesting to see where he lines up. With Josh Uche and Matt Judon in the mix, and the Pats working some under fronts with only one stand-up outside linebacker, Van Noy is playing a decent amount at inside linebacker.

After missing a few practices, rookie Christian Barmore returned on Sunday. Barmore got thrown right into the fire with one-on-one reps against top guards Shaq Mason and Michael Onwenu. Onwenu got him, but Barmore decisively beat Mason with an impressive rip move. The Pats’ second-round pick flashed heavy hands and decent anchor in team periods, taking the reps with the starters. Barmore might have a more significant role as a rookie than we initially thought. He’s progressing quickly.

7. DL Carl Davis a Sturdy Presence in the Interior DL

The 6-5, 320-pound Davis is having a solid summer. He won both of his reps in one-on-ones and was very stout in the middle of the line. Davis played well in limited snaps during the 2020 season and has good size and lateral quickness inside. He brings plenty of play strength but also has some length and finesse. I’m a fan of Davis’s game. We are only ten practices into training camp, but I’d have him on the team right now.

Another interesting storyline to monitor 2020 third-round pick Anfernee Jennings’s role moving forward. Jennings finds himself in a crowded linebacker room with veteran additions (Hightower, Judon, Van Noy) and another draft pick (Ronnie Perkins). Plus, fellow 2020 draft pick Josh Uche is lightyears ahead of him. Jennings is repping with the scout team defense at middle linebacker. The coaching staff either believes he’ll have more opportunity there, or he isn’t bringing it as he used to off the edge. In college, Jennings was a pure edge guy. He’s around the ball some with the scout team, which signals he’s getting it mentality. Still, you wonder if there’s a spot on the team for him. After Raekwon McMillan’s season-ending ACL injury, the opportunity is there for the taking.