Lazar’s Notebook: Even with 4/5ths Missing Patriots O-Line Not Half Bad 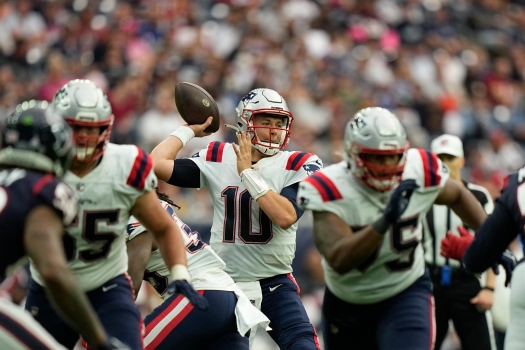 The Patriots’ comeback victory over the Texans wasn’t all that impressive given the opponent.

Houston (1-4) is heading in the wrong direction. The Davis Mills-led Texans built a 22-9 lead in what was arguably the worst 33 minutes for Bill Belichick’s defense in his Pats tenure, especially factoring in the level of competition.

However, rookie quarterback Mac Jones rallied for his first fourth-quarter comeback in the NFL when the Patriots needed it most behind an offensive line down four starters.

To their credit, New England’s patchwork offensive line made sure a lacking Texans front didn’t significantly affect Jones or the Pats’ running game, putting a very respectable product on tape.

Jones was only under pressure on eight of his 31 drop-backs (25.8%), the second-lowest pressure rate he has faced in five games this season.

As we look ahead, the question now is, did any of the four backups who kept Jones clean for four-straight scoring drives earn more playing time?

Here are individual report cards on the four spot-starters and how they fared against the Texans:

We were close to giving Herron a grade in the “A” range, but there were a few too many losses on base blocks to go there. Overall, he was really good. The Pats helped out the tackles by chipping on some of their longer-developing plays, but Herron allowed only one hurry on 12 true pass sets and ran his feet extremely well as a run blocker. Although he may not have a choice, Herron may be more comfortable on the left side.

Herron walled off inside slant rushers on several occasions to keep running plays on time, made a terrific pull block on Brandon Bolden’s 24-yard toss, and got great depth out of his stance to block inside-out in his pass sets. He made guys go through him in pass protection and played with good balance and rhythm in the running game. If Herron consistently puts tape out like this, he’ll be starting down the road.

Karras is just a steady, smart, and experienced interior lineman. He doesn’t do anything particularly flashy, but he has enough play strength and foot speed to get the job done. Plus, he keeps his head on a swivel for schemed pressures like stunts and blitzes.

Pats center David Andrews and Karras had probably the cleanest pass off of the season for the offensive line on the first third down of the game. Houston sends an interior blitz with the linebacker twisting around the DT, a scheme that gave New England’s starting O-Line fits in the first four weeks of the season. Not here. Andrews and Karras are all over it, and Mac hits Kendrick Bourne for 15 yards. Karras’s effort and professional attitude would go a long way in the starting lineup.

My grade for Cajuste is more flattering than PFF’s due to it being his first career start with only one training camp under his belt. Still, Cajuste allowed a team-high three quarterback pressures due to struggles with hand fighting and posture/balance (waist bending, ducking his head into contact). He also gave up the inside too often as a run blocker.

Cajuste’s foot speed and athleticism in space pop off the tape. He makes some terrific blocks on the move going up to the second level. Although he was beaten initially, the pass set above shows a heady tackle who keeps his feet moving to recover in the rep and allow Jones to get away from the pressure without committing a penalty. Cajuste was also solid on kick-out blocks in the run game. Is Cajuste ready to start? Not yet. But his athletic profile is worth developing, and he has starter-level upside. I’m a fan. He’s just raw.

Ferentz was the worst of the group, but he didn’t completely anchor the entire unit, so he got a passing grade. C’s get degrees, right? Ferentz had a few critical wins in true pass sets for the Patriots and was an effective puller in their play-action schemes. His play strength is less of an issue now than it was in his first few seasons. A solid interior backup is never a bad thing.

The Patriots’ offensive line deserves credit for New England’s comeback victory over the Texans. Even though it wasn’t perfect, they gave excellent effort for four quarters.

Although it isn’t fair to question the effort from the starters, those guys try hard too; it was a welcomed sight to see a hungry group with a chip on its shoulder go out there and compete.

Karras, Herron, and Cajuste emerging as legitimate options moving forward will hopefully light a fire under the underperforming starters when they return to the field.

According to NFL protocols and Patriots head coach Bill Belichick, the two COVID listers, Isaiah Wynn and Mike Onwenu, have a chance to play this week against Dallas. As a vaccinated player, Onwenu will be cleared. Wynn’s status will depend on if he’s healthy enough to play, and the same goes for right guard Shaq Mason (abdomen).

Before you say it, the Pats won’t give up on left tackle Isaiah Wynn because of a bad first month. Wynn has way more good tape than bad tape in the NFL. He’s adjusting to life without Joe Thuney and is a former first-rounder whose $10 million fifth-year option was picked up. Frankly, he has a longer leash than that due to past performance and investment.

Based on the tape against Houston, Herron made a great case to remain in the starting lineup at right tackle when everyone is fully healthy, and that’s the most likely combination.

But if the Patriots’ coaches feel like a more significant shakeup is necessary, Karras is a starting-caliber lineman that is fully capable of playing more.

The Patriots have two potential combinations that make sense once the COVID guys and Mason return (Trent Brown is now on IR and must miss three games):

Even if the offensive linemen who stepped in against the Texans don’t earn more immediate playing time, it’s still great to see that the Patriots’ depth on the O-Line is in a good place.

On that note, let’s empty the rest of the film notebook from the Patriots’ win in Week 5:

1. Burn the Tape Game for the Patriots’ Secondary

The Pats’ secondary will correct the mistakes from the tape against the Texans and never speak of it again. Although they were better situationally in the second half, the pass defense in the backend was bad for the entire game. Poor pursuit angles, poor eye discipline, losses across the board in man coverage, poor middle-of-the-field help from robbers/zone defenders, and so on. Texans offensive coordinator Tim Kelly has New England’s post-safety coverages figured out because it didn’t matter that it was Davis Mills instead of Deshaun Watson. If the Pats cover like that against Dallas, Dak will hang 50 points on them.

Although the secondary struggled, arguably the most positive development for the Patriots defense is that Dont’a Hightower looked like a different player compared to the first four games. Hightower was playing fast, processing blocking schemes quickly, and his physicality was back. Essentially, vintage Hightower. If that is a sign that Hightower is shaking off the rust and will play like this moving forward, that’s a massive development for Bill Belichick’s defense.

Another positive from film review is that second-round pick Christian Barmore is legit. He drew two holds in this one, one as a pass rusher (see below) and another in run defense. To that point, the Pats’ coaches are now scheming ways to get Barmore one-on-one’s because he’s taking advantage of those opportunities.

Here, the Pats put five rushers on the line of scrimmage to engage each offensive linemen, which gets Barmore a one-on-one with center Justin Britt. The Pats’ rookie uses a punch-rip move to beat Britt and draws a hold on the Houston center. Barmore is playing 50.9% of the defensive snaps, and that’s a lot for a rookie. I’d be wary of putting too much on his plate.

One of the low-key standouts for the Patriots defense this season is Deatrich Wise. Wise has a 73.2 overall grade and a 73.9 run defense grade from PFF through the first five games. His block anticipation and technique are rounding into form as a run defender, using his length and quickness to his advantage. There were some great reps from Wise against the Texans where he was pressing blocks and building a wall as a two-gapper. Plus, he beat the tight end a few times with quickness off the snap to get into the backfield. The Pats gave Wise a decent contract in free agency that took us by surprise. But he’s living up to it right now.

Lastly, RBs coach Ivan Fears summed up Rhamondre Stevenson’s performance perfectly on Tuesday, saying, “Rhamondre started out too cautious. He was almost very nervous to carry the ball. We can’t play that way…he turned it loose at the end.” Spot on from the veteran coach.

The Pats have a TE lead play blocked nicely on this run, with Justin Herron and Hunter Henry turning their blocks outside and James Ferentz holding his ground against the two-gapper. However, Stevenson telegraphs his entry point and doesn’t explode through the hole.

What we want to see from Stevenson is a “peek a boo” technique where he initially runs at the A-gap to get the two-gapper to commit and then explodes through the B-gap.

Stevenson can take full advantage of the blocking he got on the run above but was too timid, as Fears said. The rookie is better than that and will be as his confidence grows.

Celtics down Wizards 130-121 Without Tatum