Is the Patriots' offense undergoing a scheme change with Bill Belichick at the helm? 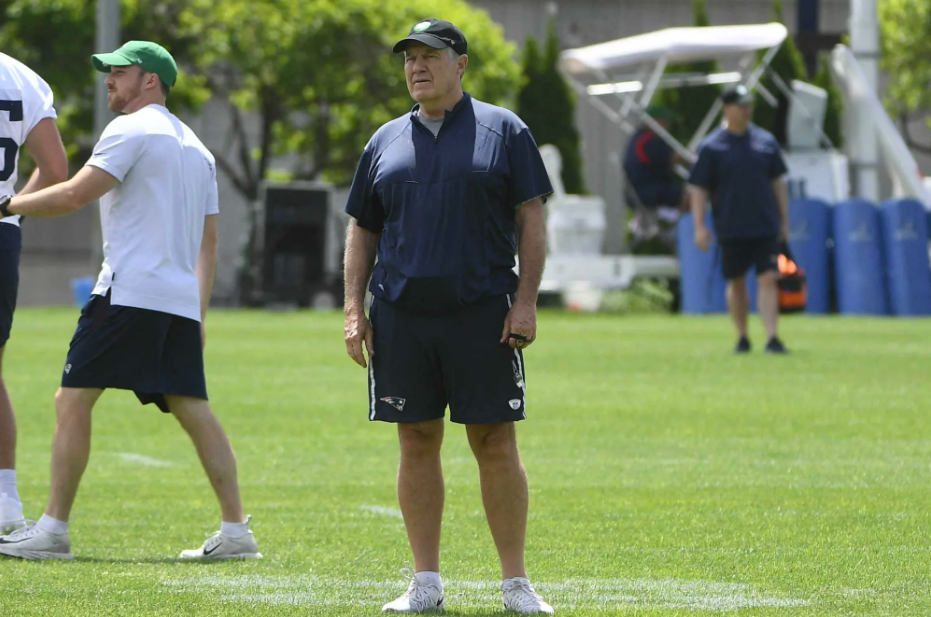 FOXBORO, MA – The Patriots held a light conditioning and walkthrough-heavy practice coming off the long holiday weekend that lasted roughly one hour on the fields behind Gillette Stadium.

There were very few meaningful takeaways from Tuesday’s practice, which isn’t a surprise with the Memorial Day hangover and mandatory minicamp on the horizon from June 7-9 next week.

Although it’s hard to decipher what’s real and what’s spring fodder in these early stages, the Patriots continue to tease with their words and actions some schematic shifts this spring.

“We’re doing a lot of things different,” head coach Bill Belichick said before practice when asked about the schematic direction of the offense heading into quarterback Mac Jones’s second season.

We’ll have more definitive answers when the entire roster reports next week, and it’s important to acknowledge that some of what we are seeing now could disappear once September rolls around. But it’s safe to assume that changes are coming, especially on offense.

Here are five takeaways from an admittedly light practice for the Patriots on Tuesday:

1. More on Belichick, Patricia, and Judge Coaching the Offense

Patriots head coach Bill Belichick remains heavily involved with the offense, working his way around to the different skill groups early in practice. During the walkthrough portion, Belichick was front-and-center along with Matt Patricia and Joe Judge as the first-team offense went to work (the defense was working with Steve Belichick and Jerod Mayo on the other field). Based on what we’ve seen through two spring practices, Patricia served in a run-game coordinator role while Judge focused on the passing game, which is a standard way of divvying things up at the college and pro levels. Who relays the plays into the huddle isn’t indicative of anything at this stage. Most practices are pre-scripted to emphasize certain things, so it’s not like in-game play-calling where you react to different variables. Let’s see what happens in August.

2. Will the Patriots Stick to Zone-Based Run Scheme When Stuff Gets Real?

We need more real football before proclaiming the Patriots a zone-heavy rushing attack, but speaking to coaches who major in that system, reps are always crucial to build flow. Although rhythm is always important in the run game, outside zone/bootleg systems are predicated on in-unison blockers and making everything look the same to the defense. Some coaches believe it takes multiple seasons to install a true Shanahan-style system. Although there’s no contact, these spring reps are all about building a schematic foundation on offense and defense. If the Pats aren’t preparing for a shift to more zone schemes, this would be a waste of valuable time, and Belichick isn’t about to waste the limited time on the practice field on stuff they won’t use during the season.

Look, it’s early. We’ll repeat it: it’s early. But based on what we’ve seen in two open practices, the early-front runners to dominate reps at wide receiver in 11-personnel are Parker (X), Bourne (Z), and Meyers (slot). That means Nelson Agholor is currently the fourth wide receiver backing up Parker, while second-round pick Tyquan Thornton isn’t in the conversation yet. Insurance for Parker is needed given his extensive injury history. But Agholor’s $14.9 million cap hit for a fourth receiver stands out as something the team might take a long look at down the road if Thornton begins to catch on in training camp. New England would save $9.06 million against the salary cap if they can find a trade partner for Agholor, while they’ll save $4.06 million if they cut the veteran wideout. According to cap wizard Miguel Benzan, the Pats currently have $500k in cap space, so they’ll need to create cap space at some point.

With starting left tackle Isaiah Wynn’s notable absence this spring, the Patriots worked out with Trent Brown and Yodny Cajuste at left tackle in two practices open to the media. At right tackle, it was Herron in both sessions, who has been a constant participant at the facility this offseason and is clearly taking more reps at right tackle. Herron was more comfortable on the left side after playing there in college in his first two seasons, putting out solid left tackle tape as a backup, while his right tackle film wasn’t as sharp. As Wynn heads into the final year of his rookie contract carrying a hefty cap hit ($10.4M), his absence is very notable from this perspective. If Herron can transition to right tackle, the Patriots could field an offensive line that looks like this (from left to right): Trent Brown, Cole Strange, David Andrews, Michael Onwenu, and Justin Herron.

After he was a light participant in a more intensive first open practice, the second-round pick spoke to the media about his mindset heading into his rookie season following Tuesday’s session. Thornton emphasized that he’s working on getting “stronger, not bigger” by hitting the weights and adding good calories into his diet. Thornton also joked that his teammates aren’t challenging him to a race after running a blazing 4.28-second 40-yard dash at the combine. We have yet to see Thornton run routes against corners at full speed, so it’s impossible to know where he’s at against NFL competition. Still, it might take a year for Thornton to make a big impact as he adds weight and develops his route tree. With the vets on the depth chart ahead of him, there isn’t a clear path for Thornton to contribute in year one.