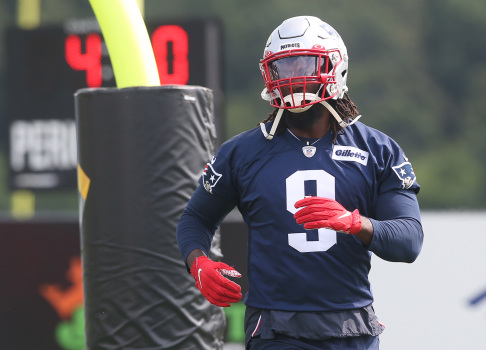 FOXBORO, MA — The Patriots held their first training camp practice in full pads on the fields behind Gillette Stadium on Tuesday morning.

After five consecutive non-padded sessions, the intensity, and contact, was a full go on day six.

We saw the first one-on-one periods between offensive and defensive lines and receivers and defensive backs with players in full pads. Plus, high-intensity 11-on-11s in the running game.

Patriots captain Devin McCourty said it best after practice. Both sides of the ball for New England are built to be physical with a massive offensive line and a hard-hitting front seven. And we certainly saw a physical battle in the trenches, with each side winning its fair share of reps.

We’ll go into more detail in the notes section, but some clear standouts in the trenches were newcomer Matt Judon, rookie Christian Barmore, tight end Jonnu Smith (kick-out blocks), fullback Jakob Johnson (lead blocks), and the left side of the starting OL (Wynn, Onwenu). Barmore did seem to injure his foot later in practice, which we’ll monitor moving forward.

In WR-CB one-on-ones, N’Keal Harry and Kendrick Bourne won all three of their reps in a drill that heavily favors the receivers.

Let’s empty the notebook from a jam-packed two-hour practice session on day six:

On the first day of pads, the veteran was clearly the best quarterback on the field, finishing five-of-seven in 11s in a run-heavy practice. Newton made highlight-reel tosses to Nelson Agholor (deep crosser), Hunter Henry (goal-line fade), and Jonnu Smith (toe-tapper in 7-on-7). On Agholor’s deep bomb, the speedy wideout crossed over the deep part of the field with Kyle Dugger as the lone deep safety, and Newton led him into the end zone. He then lofted a pass up for Henry towards the back pylon that fell in the bucket and threw over an underneath defender to get the ball to the sideline for Smith. Newton is improving each day with better decision-making, more in-rhythm throws, and leading receivers into good spots. Newton was sharp on Tuesday and leads the day counter 4-2 over rookie Mac Jones.

The first day of pads was a rough one for rookie quarterback Mac Jones. He threw an interception in an early period of 11s by tossing a throw directly to Ja’Whaun Bentley, missed an open Jakobi Meyers in the middle of the field, and threw a contested ball to Kristian Wilkerson instead, and then had another interceptable ball that Anfernee Jennings dropped. Jones finished one-for-six in competitive 11-on-11s. Let’s not overreact to the first-round picks’ first real NFL practice. There’s a long way to figure things out, but this was Jones’s worst practice of camp by far.

The image above is the complete list of wide receiver-cornerback one-on-ones, where the receivers, as you’d expect, won 14-of-19 reps (one was a drop by Agholor). Some standouts:

The good news from the Pats’ rookie class is that second-round pick Christian Barmore was good against the backups in one-on-ones. Barmore had four wins, including tossing fellow rookie Will Sherman to the side on one of them, but didn’t go up against any of the starters.

In the first live rep of training camp, the left side of the Patriots’ offensive line caved in the defense, and Damien Harris went untouched for a long carry. Left tackle Isaiah Wynn and left guard Michael Onwenu put the defense on notice that this offensive line is a bulldozer. The first rep went to the OL, along with two other clear wins, including one walk-in TD on the goal-line for Sony Michel and a nice lead block by FB Jakob Johnson on Dont’a Hightower. The defensive line also held its own, though. The middle of the Pats’ DL is tough to move in NT Davon Godchaux and DE Lawrence Guy. Rookie Christian Barmore had some good stalemates as a gap-plugger, and newcomer Matt Judon came in unblocked for a splash TFL (more on Judon later). This is going to be a physical, physical group on both sides of the ball. Belichick has to love that.

The loudest reminder of live contact came when rookie Rhamondre Stevenson truck-sticked Myles Bryant in 11s. To be fair, Stevenson out-weighs Bryant by nearly 50 pounds, but Stevenson’s lowering of the shoulder made a loud “pop” and flashed his power as a runner. The Pats’ fourth-rounder is a bit slow through the hole right now, which might be some rookie indecisiveness, but he runs with good power and active feet. Plus, he has decent hands as well. We all expect Stevenson to “redshirt” the year, but poor Myles Bryant.

I was waiting for pads to get a glimpse of Judon’s abilities as an edge-setter, and he passed with flying colors on day one. Judon went right by Trent Brown in one-on-ones with a quick inside counter and had two run stuffs during team periods. He also anchored the line with Barmore on one play, allowing Ja’Whaun Bentley to come up and make the stop. Then, he would’ve had a sack of Newton if he was allowed to hit the QB. Judon’s physicality on the edge is a welcomed sight after the Pats were the worst defense in the league on outside runs last season. Belichick mentioned earlier this week that it should be an easy transition for Judon from Baltimore, who asked him to do a lot of the same things in their defense. You can see that coming to fruition now.