Lazar’s Notebook: Cam Newton Was Sharp In Return, But Mac’s Time is Coming 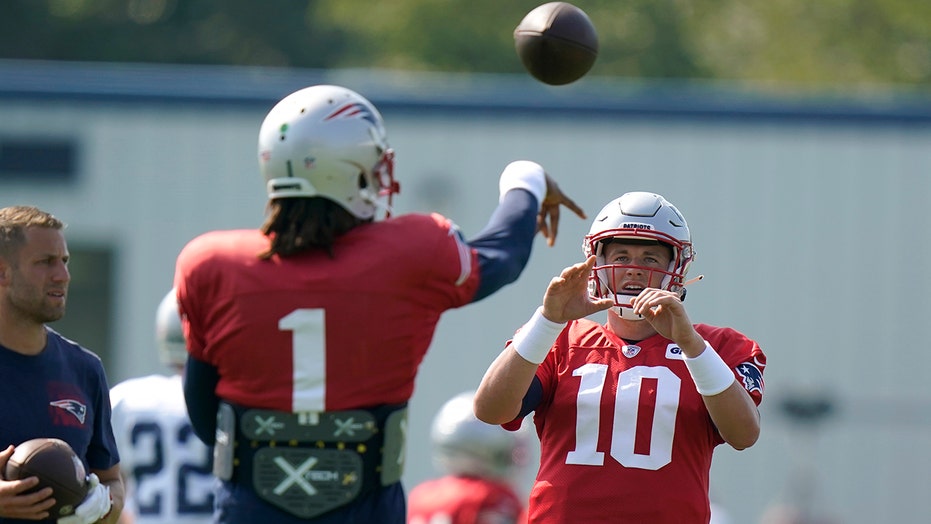 FOXBORO, MA — The Patriots put a bow on training camp with a two-hour scrimmage against the New York Giants on the practice fields behind Gillette Stadium on Thursday.

After missing the first three practices of the week, starting quarterback Cam Newton returned for the second day of joint practices and was the first quarterback in the huddle during team drills.

Newton led the starting offense on one eight-play drive that ended with a Damien Harris walk-in touchdown on the goal-line, completing two chunk plays to Kendrick Bourne on in-breakers. Giants cornerback James Bradberry dropped an interception on a Cam pass intended for Kristian Wilkerson, but it was an efficient series overall for the Pats’ starters.

In rookie Mac Jones’s 20-play odyssey, New England’s first-round pick was intercepted early in the drive by veteran safety Logan Ryan (more on the play and drive later). But an offsides flag wiped out the INT, and Jones eventually led the starting offense into the end zone 19 plays later.

The bottom line with the Patriots’ quarterback battle is this: Cam Newton is far better in this offense than he was a year ago and hasn’t done anything to lose the job outside of missing practices due to a COVID protocol mishap.

However, Jones is the future, the first-round pick, and looks the part of a starting QB in the NFL.

If the Patriots didn’t want Jones to take over eventually, why draft a quarterback with the 15th overall pick? It’s common sense where this is headed.

Patriots head coach Bill Belichick will probably go with the veteran Newton to start the season, but he’s delaying the inevitable, which is that this will be Jones’s team sooner rather than later.

Let’s empty the notebook from the second and final day of joint practices with the Giants:

The two head coaches decided to run a simulated game in the final training camp practice of the summer, which saw full-tilt 11-on-11s with Newton starting things off for the first-team offense. Although Bradberry nearly intercepted Newton’s sixth throw, he threw a little late to Wilkerson, and Bradberry jumped the route, he was four-of-seven on the drive. Cam completed two in-breakers to Kendrick Bourne, including a long crosser that was probably a touchdown on the second-to-last play of the drive (the Pats opted to put the ball at the one-yard line to get some goal-line work). Outside of the one near-mistake and a batted pass at the line, Newton threw the ball well and hit Bourne in-stride on a similar throw to Jakobi Meyers’s touchdown against the Eagles last week. Again, if Newton loses the starting job to Jones, it wasn’t about his on-field performance; the writing was on the wall when they drafted Mac.

Evaluating Mac Jones’s 20-play series is difficult given that there were at least three drops (and one other ball that hit Nelson Agholor in the hands but was a forced drop). The Pats’ rookie threw a perfect go-ball dime to Gunner Olszewski down the left sideline, who got behind James Bradberry. There were also clear drops by Damien Harris and Jonnu Smith. Overall, Jones finished 10-of-21, including the drops, with an adjusted completion percentage of 55.6%.

Jones fell for a classic bait tactic in a two-high coverage structure on the pick to Logan Ryan. Pats tight end Jonnu Smith was running up the seam when the defender let him go, giving the illusion that Smith was open. However, Ryan read it the entire way and came from his backside safety spot to jump the route. For a visual, it looked like the Devin McCourty interception above. That’s a savvy veteran move by the Giants’ safety and a learning experience for Jones, who probably hasn’t seen that type of “trap” coverage before. Jones eventually got the offense down the field with three conversions on fourth down and made a terrific throw to Kendrick Bourne for a touchdown in the back of the end zone. Bourne also made an excellent catch by leaping up and toe-tapping in bounds, but it was a good example of a throw where either Bourne would make a circus catch or the ball harmlessly sails out the back of the end zone. By the looks of it, the defender in coverage thought it was a throwaway. Jones didn’t light up the Giants’ defense as he did in Wednesday’s practice, but his ability to bounce back after mistakes is one of his best attributes.

The Patriots’ second-year linebacker returned to practice in a big way on Thursday, registering three sacks during the scrimmage. Uche had sacks on back-to-back plays in one sequence, where he blew by starting left tackle Andrew Thomas with a speed-dip move and worked with Kyle Van Noy on a stunt (he also drew a hold on the second sack). Then, he came back on the following series and looped around Dont’a Hightower’s interior push to sack Daniel Jones. It was a dominant practice for Uche, capping off a terrific summer. The only thing holding the 2020 second-rounder back from a breakout season is durability.

After some concerns about Bourne’s grasp of the offense, the Pats’ free-agent addition had a strong practice on Thursday. Bourne had four catches during team drills, including the two big plays on Newton’s drive and two high-leverage catches with Jones. On the first catch from Jones, Bourne ran an out route at the sticks to move the chains on fourth down. The Patriots needed about six yards, and Bourne made sure to run his route past the line to gain. Then, he had the circus grab in the back of the end zone from Mac, and Cam sprinted down the field about 50 yards to celebrate in the end zone. This summer, Bourne hasn’t been perfect with his route conversions, but he’s a savvy route-runner with terrific hands and body control along the sideline.

Although he dropped the pass, Olszewski’s explosiveness to blow by a starting corner in Bradberry on the outside was notable. During Wednesday’s practice, the Pats’ wideout also ran some crisp routes out of the slot on the option series. Gunner is getting open against starter-level competition more often this summer. There’s no doubt about that. Now the final piece to his developmental puzzle is working on catching the ball. I hate comparing Gunner to Julian Edelman, I really do, but let’s face it, Edelman didn’t have the best hands either.

Williams had a quiet first day of joint practices with the Giants, which we took as a good thing seeing that he wasn’t targeted much in coverage. However, Daniel Jones picked on Williams more on day two, while J.C. Jackson and Adrian Phillips were involved in a coverage bust that led to a long completion to Dante Pettis. The absence of a true lockdown corner like Stephon Gilmore was felt in every competitive practice in camp. Without Gilmore, it feels like everyone is playing up a level, causing the Jenga tower to collapse at times.

7. Patriots Defense Clamps Down in the Red Zone on Final Series

After Jones drove the Giants’ starting offense inside the 20, the Patriots’ defense held New York to a field goal with a good sequence in the low red zone. The Pats forced a throwaway and a check-down into the flat, then got off the field with a run stop on third down. It was good situational football.