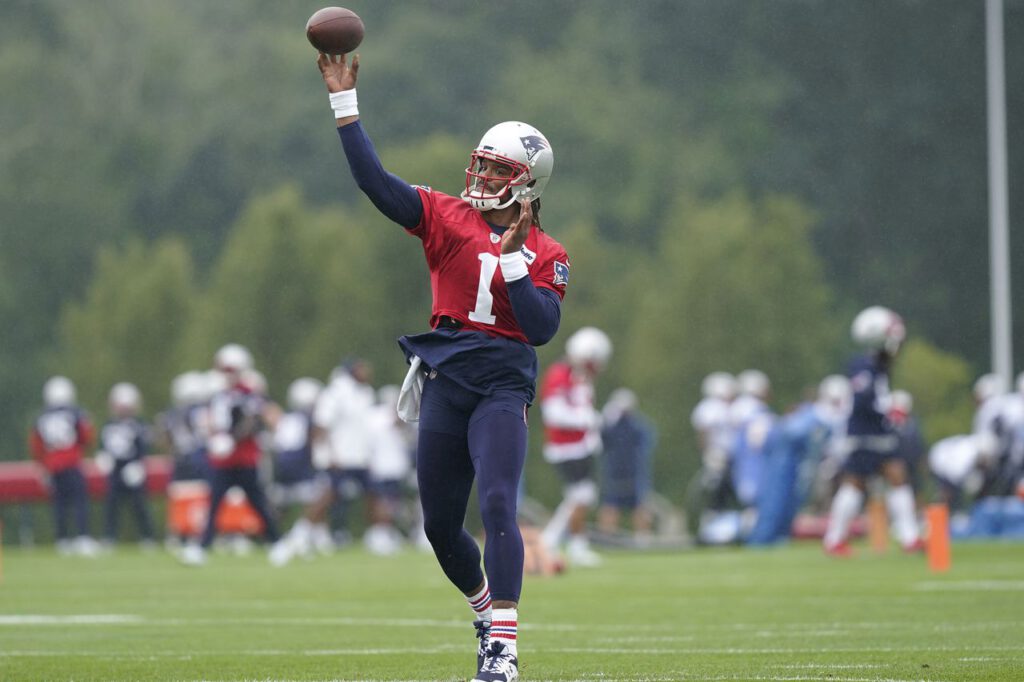 FOXBORO, MA — The Patriots held their second training camp practice in another two-hour session on the fields behind Gillette Stadium on Thursday morning.

After rookie quarterback Mac Jones won the opening day of camp, the second practice belonged to veteran Cam Newton. Newton was six-of-ten in competitive 11-on-11s, with the best sequence of any quarterback in camp so far towards the end of the session.

Newton completed three consecutive passes starting with a beauty to running back Brandon Bolden out of the backfield. Bolden ran an option/out route on Josh Uche, and Newton placed the ball perfectly along the sideline as Bolden came out of his break. Cam also threw a touchdown working in the low red zone to Hunter Henry with Henry Anderson in his face.

The former MVP went through a team period where the Patriots repped play designs where Newton’s legs were a factor. He even caught a touchdown on a trick play. It was a Cam day.

The seesaw battle between Newton and Jones will continue all summer, and if we are keeping score at home, it’s now 1-1 (we’ll keep track of that tally throughout camp).

Many of the players who are on the physically unable to perform list or non-football injury list were viewing practice from the sideline.

Here are other noteworthy thoughts from my viewing of the second day of Pats camp:

During the early portion of practice, it was trending towards another win for Mac Jones. Jones was four-of-four in a seven-on-seven period where he threw a touchdown to Jakobi Meyers on a corner route and made two other decisive throws to Kendrick Bourne over the middle. The rookie also made a tight-window throw to Matt LaCosse that just got past the out-stretched hand of a closing Kyle Van Noy and threw a dart to Kendrick Bourne on a curl where he hit the top of his drop and the ball was out in a flash. However, Jones wasn’t as sharp in 11-on-11s, finishing four-of-11, and hit the ground in frustration when he threw a ball in the dirt to an open Jakobi Meyers crossing over the middle. Overall, the operation runs smoothly with Jones under center. He’s a decisive decision-maker, gets the ball out quickly, which helps him hit tighter windows, and is nimble in the pocket. But there are moments where he gets visibly frustrated with himself when he makes mistakes. He’ll learn to harness those emotions appropriately.

After a quiet day one, the Patriots’ new tight end duo made their presence felt on Thursday. Henry caught three touchdowns during red zone drills, mainly working out of the slot. His savviness to find soft spots in the coverage and win with body positioning make him a natural weapon near the goal line. His highlight was a very smooth slant route where Newton found him for six. On the other hand, Smith made his first catch in team drills on a crossing route off play-action from Newton, a concept we’ve seen Rob Gronkowski run a thousand times. The two tight ends were as advertised on day two, with Henry providing a security blanket for his quarterbacks and Smith running away from defenders in the open field.

The return of linebacker Dont’a Hightower brings leadership and physical presence back to the Patriots’ defense. In these non-padded sessions, though, Boomtower cannot bring it like we know he can. Still, he’s making his presence felt in coverage, which is notable given his size and some limitations in that area. Hightower had a pass breakup on day one and smothered an inside option route by Tre Nixon on day two. After a year off, he looks ready to go and might be even lighter on his feet than he was in 2019.

Although we aren’t in padded sessions where the run game is live, Michel is noticeably slimmed down and looks quicker coming out of the backfield. He caught a touchdown on an option route from Jones towards the end of 11-on-11s and a swing pass from Newton earlier in practice. The Pats ran the ball on 62 percent of Michel’s snaps throughout his career, a tell to the defense. If he can develop in the passing game, it’ll make the Patriots less predictable. We’ve been clamoring for more routes for Michel to diversify the offense when he is on the field, and it looks like the former first-round pick is trying to expand his game.

5. WR Kendrick Bourne Gets to All the Right Spots

Bourne is not a flashy practice player, and he doesn’t create explosive plays on the defense, but he’s always where the quarterbacks expect. Bourne is a typical underneath target who works well against shallow zones and navigates the middle of the field with ease. He’ll sit down in a soft spot or snag a catch in traffic over the middle with strong hands. Bourne knows how to get open out of the slot and between the numbers. Even if he isn’t a big-play guy, the precise route-runners like Bourne tend to succeed in New England. My healthy Mo Sanu comp remains spot on.

Phillips is having a hell of a start to training camp. After locking down the Pats’ tight ends on day one, he had tight coverage on a seam/fade by Jakobi Meyers that caused an overthrow by Newton. Phillips isn’t typically tasked with covering wide receivers, so his coverage on Meyers was even more impressive. There’s a ton to like about Phillips’s game.

The arrow is moving in the right direction for second-round pick Christian Barmore, who rotated in with some of the key figures on the defensive line throughout practice. Barmore projects as a factor on passing downs to start but eventually will develop into a 3-4 defensive end in New England’s base defense. The Alabama product has the play strength and size to hold up in the run game as a 3-4 end, but his technique was inconsistent in that regard in college. If he can fine-tune his game in that area, Barmore should develop into an every-down player for the Pats. For now, he’s behind veterans Deatrich Wise and Henry Anderson, but the rookie is coming.

It was unclear if Jackson let up on the rep for a particular reason, and it was certainly not a max-effort drill for the defense, but seventh-round pick Tre Nixon got the Pats’ corner on a slant from Brian Hoyer. Nixon set up Jackson with an outside release and made a decisive cut inside to run away from one of the Pats’ top corners. It was the first time that Nixon did something flashy. Whenever a receiver catches a ball on Jackson, even in practice, it is noteworthy.

9. CB Michael Jackson, Sr. Having a Rough Start to Camp

With former second-round pick Joejuan Williams failing to stand out, some thought Jackson was a potential sleeper to make the roster. Jackson is struggling in the early going, allowing multiple touchdowns into his coverage in the first few days. Jackson is at least in the area, but he’s failing to contest passes and seems to be losing in the final phase of the down. Williams isn’t starring out there either, but he is more competitive in coverage. The only blip for the 2019 second-round pick was a loss on a back-shoulder fade to Nelson Agholor, but Jones’s pass was a little too wide for Agholor to toe-tap the sideline. Williams has been fine, while Jackson is having issues.