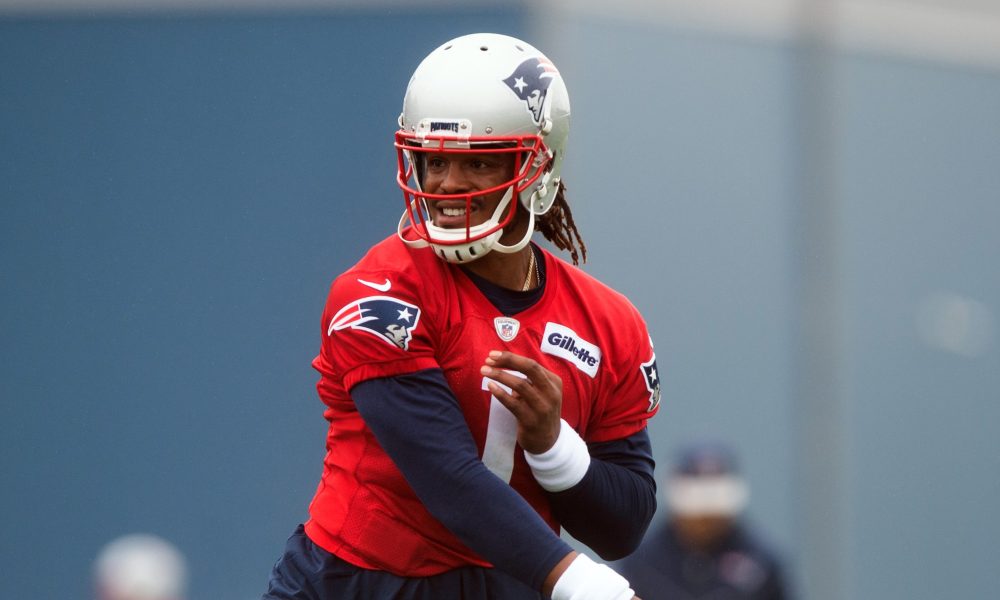 PHILADELPHIA, PA — The Patriots and Eagles held their second joint practice of the week at the NovaCare Complex in Philadelphia on Tuesday.

As Patriots head coach Bill Belichick told the media early on Tuesday morning, the two teams worked almost exclusively in the red zone in a much shorter second practice than Monday’s session.

In a one-hour and 20 minute-session, both starting quarterback Cam Newton and rookie Mac Jones were sharp in mostly 7-on-7 red-zone work, emphasizing the passing game.

Although some Eagles players joked that Newton was the “check-down king” on Tuesday, and there was some truth to that for both QBs, Cam completed 13-of-15 passes, with one of those incompletions coming on a drop of a catchable pass by wide receiver Kristian Wilkerson.

As for Jones, he had the lone blemish on the day with an interception on a forced throw to tight end Devin Asiasi but finished with ten straight completions and was 13-of-14 overall.

For added context, the skill players around Newton and Jones during the 7-on-7 periods rotated throughout practice, so each QB got to work with New England’s top healthy pass-catchers.

Speaking of injuries, the Patriots’ tight end room is decimated by the injury bug, leaving Asiasi as the only active tight end during Tuesday’s practice. Hunter Henry (shoulder) only participated in the non-contact portion of practice, Troy Fumagalli (unknown) was there but didn’t participate, and Jonnu Smith (low ankle) and Matt LaCosse (big hit on Monday) weren’t present.

Let’s empty the notebook from day two of joint practice here in Philadelphia:

Patriots quarterback Cam Newton was nearly perfect during red-zone 7-on-7s, going 13-of-15 with a drop by Wilkerson. Newton’s process is much smoother when the area of the field is forcing him to get rid of the ball faster. Between the 20s, he tends to hold the football until a receiver comes open. But in the red area, things happen faster, and Cam gets rid of the ball on time. Some notable throws were touchdowns to Jakobi Meyers (slant), Sony Michel (option check-down), and N’Keal Harry (sit route), while the highlight throw of the day was on a great route by Nelson Agholor. Agholor ran the Pats’ “shake” route where he fakes an inside break and then explodes outside towards the back pylon, and Newton then put it on him for six. Even the throw to Wilkerson was a good pass by Cam that would’ve been a touchdown if Wilkerson held onto the ball. Although a good chunk of Newton’s throws went underneath the defense, he took what the defense gave him and kept the train on schedule.

On Jones’s second pass of practice during one of the few 11-on-11 periods, the Pats’ first-round pick stepped up in the pocket to elude a rusher to his right, got his eyes from one side of the field to the other, and dropped a dime to James White on a corner route for six. Then, on his next throw, the rookie forced a bad pass into tight coverage for Asiasi that Eagles linebacker TJ Edwards intercepted. Jones recovered from the mistake with ten straight completions, making some nice passes in-between zone defenders to Jakobi Meyers and N’Keal Harry for touchdowns. Plus, he hit White again on an angle route over the middle for a TD. But for the second straight practice, Jones attempted a pass to a covered receiver that never stood a chance. After two similar mistakes on Monday, I asked him if he was testing things to see what he could get away with, and Jones disagreed with that line of thinking. He also said that he’s working on recalibrating his brain a bit on what’s “NFL open” with so many tight-window throws. We are still fully on the Jones bandwagon, but he has to cut down on the turnover-worthy plays.

On the other side of the ball, the one thing that stood out over the last two days was Philly’s own tight end duo, Dallas Goedert and Zach Ertz, having their way with the Pats secondary. Goedert and Ertz had multiple touchdowns on Tuesday, with safeties Adrian Phillips and Kyle Dugger as the primary defenders in coverage. Goedert beat Phillips up the seam for six on one play, while Ertz cleanly beat Dugger on a corner route. The Phillips on Goedert score was a good tight end making a good play, as was the Ertz TD to a degree. But we continue to see Dugger struggle in man coverage, especially off-man, where he seems to have issues with keeping his feet moving through the break. Dugger stalls at the top of the route, allowing these big tight ends to gain leverage and win at the catch point. Phillips was very good against the Pats’ tight ends in the practices at home, so maybe it was just a shaky few days for the veteran, but Dugger’s struggles in man coverage are a trend.

We aren’t ready to go as far as saying the light is turning on for Williams, but the coaching staff is rewarding him for a solid first preseason game by giving the 2019 second-round pick reps with the starting defense. Williams is playing outside corner opposite of J.C. Jackson in these practices and doesn’t look out of place. He had tight coverage on Jalen Reagor to force an incompletion on a fade, while his only noticeable loss was on a quick slant underneath that wouldn’t have gained much yardage (the Philly receiver dropped it). There are concerns with Williams’s ability to stay glued to receivers at the top of routes, but he’s serviceable on the boundary. He could also be out there as a placeholder for Gilmore so that the Patriots can allow Jalen Mills to take reps inside the formation. Mills played more over the slot and in the box over the last two days, which is where he fits best in this defense.

During a strength-on-strength matchup, the Patriots’ offensive line worked against Philly’s defensive line in one-on-ones. In the first two reps, Pats right tackle Trent Brown shut down Eagles pass-rusher Brandon Graham and right guard Shaq Mason took care of Fletcher Cox. Brown came back later in the period to wall off Genard Avery, who will play a lot this season for Philadelphia. Backup tackle Justin Herron was also good with wins over Avery and DE Tarron Jackson. Brown and Mason then combined on a massive combo block to open a hole for Rhamondre Stevenson during goal-line work at the end of practice. I thought Brown might have lost a step based on the first couple of weeks of camp, but he was much better today.

6. Patriots Wide Receivers: Who is Up and Who is Down?

– Jakobi Meyers: Meyers quietly goes about his business as one of the best route-runners on the team. He ran a filthy fade route against Eagles CB Anthony Harris in one-on-ones where he left Harris in the dust that line, caught three TDs in red-zone work, and had six catches overall. Meyers is a pro and had a massive smile on his face when asked Nelson Agholor taking the coverage upfield and away from Meyers’s wheelhouse in the middle of the field.

– N’Keal Harry: Harry continues a strong summer at practice with two solid days in Philly. Harry made himself big on two occasions by sitting down on the goal-line in-between zone defenders and scored by falling into the end zone. His size is noticeable in the red area. Now, of course, we need to see it translate in a game.

– Kristian Wilkerson: the Kristian Wilkerson hype train is starting to slow to a halt. Wilkerson is still open in practice, but he can’t catch a cold all of a sudden. Wilkerson beat Eagles CB Avonte Maddox for a touchdown in the low red zone on a dig route but dropped a very catchable pass from Newton. If Wilkerson can’t work through his struggles with drops, his push to make the 53-man roster is looking more unlikely.