Lazar’s Notebook: Did Texans and Colts Give Patriots a Blueprint to Beat Titans, Bills? 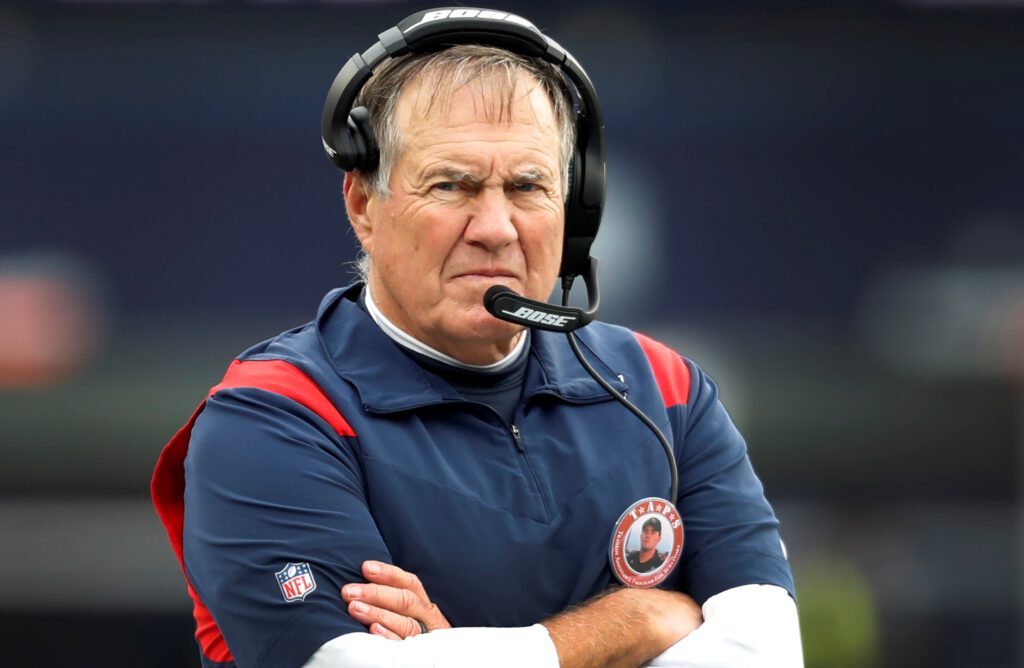 While enjoying the weekend off following Thursday night’s blowout victory over the Falcons, the positive momentum continued for the Patriots on Sunday.

Thanks to a Texans upset and a Colts statement, New England claimed first place in the AFC for the first time since 2019 and gained a game in the standings on the top-seeded Titans.

Along with climbing to the third seed in the AFC playoff picture, Bill Belichick’s staff has tape to study of their next three opponents as they construct their game plans in the coming weeks.

Tennessee comes to town this Sunday. Then the Pats travel to Buffalo and play Indy after their bye week; one would imagine that Belichick will study that Colts-Bills film a dozen times over the next month.

Although the Pats will gladly take a move-up in the standings, the bigger question is, can these tapes serve as blueprints for New England?

Focusing on Tennessee and Buffalo, the answer for one team is “yes” while the other is mostly a no.

Starting with this week’s opponent in the Titans (8-3), the final score against Houston wasn’t a good indication of the bigger picture as Tennessee dominated outside of the turnovers.

The Titans’ defense allowed two early-scoring drives, then shut Houston down, with the Texans benefiting from two short fields off turnovers.

The Texans’ defense deserves credit for forcing five turnovers, but the Titans gained 420 yards and are unlikely to cough it up that many times this week, as Belichick said on Monday morning.

Plus, Houston’s offensive system with a mobile quarterback in Tyrod Taylor is vastly different from what the Pats run with Mac Jones. There’s not much to glean there.

Defensively, the Texans showed what you can’t do against Tennessee’s Derrick Henry-less offense more than what you should do. There are some things the Pats could borrow, but learning from Houston’s mistakes is more important.

The second level of Houston’s defense was extremely undisciplined. First, their linebackers were keying on pullers and fell for false pulls all afternoon.

In the passing game, Houston tried to play cover-two and were drawn out of passing lanes by Tannehill’s eye manipulation and gave up a lot of yards underneath the defense.

The one game-plan wrinkle the Patriots may borrow is how Houston pressured Tannehill into turnovers. Above, Houston threatens a blitz, then drops the on-ball linebackers into short zones, and Tannehill never sees them drop and throws an easy pick. Then, the Texans use a “follow” blitz to put the running back in a two-on-one to force another interception.

Although the forced turnovers were nice for Houston, they got thoroughly out-played by Tennessee, and this wasn’t much of a blueprint.

The Patriots will expect a different game against the Titans than what we saw in their loss to the Texans on Sunday.

However, the Colts laid down a blueprint that was first implemented by the Jaguars to take down the Bills, and you can bet Belichick took notice.

Bills quarterback Josh Allen had two of his worst performances in years against Indy and Jacksonville’s zone-heavy defensive plans.

The Colts spun the dial in zone by disguising cover-two and cover-three structures to force Allen into check-downs and bait him into bad decisions when he gets impatient. Allen wants to throw aggressively downfield, and Indy forced four turnover-worthy plays by the Bills’ QB (two interceptions).

Two-high safety shells are working against Buffalo because: 1. They’re keeping the top on their vertical passing game 2. The Bills are 27th in rush EPA since Week 6, so they’re not a threat on the ground to get teams out of playing their safeties deep and 3. Allen’s isn’t a great anticipatory thrower over the middle.

The Colts dominant performance on the ground vs. Buffalo (46 carries 246 yards 4 TDs) started on the first drive when they went 65 yards on 11 plays (6 runs) for a TD. It included adding a jet motion to split zone, OZ, & finished w/their signature 'wham-bam' concept. This is art pic.twitter.com/8Eoa9PGbBQ

Then, Colts running back Jonathan Taylor led a diverse rushing attack that gained 264 yards with four touchdowns, which also helped Indianapolis dominate in time of possession.

When the Patriots play Buffalo, expect a similar plan to run it down Buffalo’s throats offensively and spin the zone dial on Allen.

With an extra few days to prepare, the Patriots have some homework to do with the biggest four-game stretch of the season underway.

Let’s empty the film notebook from the Patriots’ win over the Falcons in Week 11:

1. Pats LB Ja’Whaun Bentley is Having a Breakout Season

Early in his rookie season, Bentley looked like another day-three diamond in the rough for Bill Belichick as a thumping middle linebacker who fits the mold to a tee.

However, opposing offenses began exposing Bentley’s athletic limitations in space and in coverage, which spoke to why the Purdue product fell to the fifth round in 2018.

In a similar mental breakthrough in year four as former Pats linebacker Elandon Roberts, Bentley is now making up for his below-average speed by staying a step ahead mentally.

Bentley has a better feel for blocking schemes, route combinations, where his landmarks are in coverage, and New England’s shift to zone coverage also benefits him.

As a result, he’s playing faster, even if he isn’t actually faster in a 40-yard dash. In the play above, Bentley diagnoses the play-action scheme quickly and uses a “robot” technique to turn and run underneath Kyle Pitts’s crossing route, forcing Matt Ryan to check it down.

The Patriots knew that the Falcons would try to hit their talented rookie tight end, Pitts, on crossing routes against middle-of-the-field zones. On numerous occasions, Bentley executed his zone drops perfectly to fall underneath Pitts’s routes and force the ball elsewhere.

Many linebackers speak about the importance of understanding route concepts and where the offense is trying to attack the defense in the passing game to play faster in coverage.

Bentley’s development in the mental aspects of coverage is helping him cover at a higher level, and he can still come downhill and finish in the running game, same as before.

With Bentley in a contract year, he’s earning a second contract with the team, forming a formidable tandem with veteran Dont’a Hightower in the middle of New England’s defense.

2. Pats Get a Vintage Performance From FS Devin McCourty

In a year with a few ups and downs for the 34-year-old, McCourty delivered a throwback performance in Thursday night’s shutout against the Falcons.

McCourty’s had some uncharacteristic mistakes playing deep safety this year, where he’s overrunning plays and taking poor angles to the ball.

Here, the Pats appear to be in an inverted cover-two scheme where McCourty takes the deep half. Ryan tries to attack the weakness in cover-two by throwing the corner route into the hole between the half-field safety and the flat corner. However, McCourty ranges over from the near hash and swats the ball away from Falcons wide receiver Tajae Sharpe.

The Patriots need vintage McCourty to continue showing up in their upcoming four-game stretch against three playoff teams (vs. TEN, at BUF, at IND, vs. BUF).

Davis and Godchaux’s ability to play on the nose gives the Patriots flexibility and keeps both nose tackles fresh throughout the game.

Speaking to the flexibility, the Patriots can deploy a short-yardage defensive line with Davis over the center and Godchaux playing a four-technique in the B-gap that is very difficult to run on.

On their back-to-back short-yardage stuffs in the fourth quarter, Davis dominated Falcons center Matt Hennessy by pressing Hennessy into the backfield to reset the line of scrimmage.

Based on the tape we’ve seen with Davis at nose tackle and Godchaux as a 3-4 DE, that’s New England’s best run-defending D-Line and maybe the best way to use Godchaux.

Although the Mac-to-Agholor connection isn’t connecting on deep passes at a high rate yet, it was good to see Agholor start separating underneath the defense on Thursday night.

By getting open on stop routes and shallow crossers, Agholor is forcing corners to respect his ability to run shorter routes, which could open up the vertical game more.

In this play, Agholor (bottom of screen) runs a stop-option route to move the chains on third down. He threatens on a vertical stem with a stretch-and-stutter release which gets Fabian Moreau to open his hips upfield, then breaks down on the stop route to easily create separation past the sticks.

Again, the more Agholor puts completions like that one on tape, the more corners have to think about, which hopefully will unlock more separation on the deep ball moving forward.

5. Pats RB Brandon Bolden Proves in One Rep Why He Plays in Passing Game

The cries for Bolden to ride the bench in favor of more dynamic pass-catchers out of the backfield are waning regardless, but here’s why the Pats play love him as a third-down back.

Here, Bolden stays in to protect Jones against a blitz. The Falcons run a stunt scheme with linebacker Foyesade Oluokun (#54) wrapping around the penetrators on the line. Bolden scans the rush scheme, makes the right decision to slide across to pick up Oluokun, and has textbook technique to take on the linebacker at the point of attack. That’s teach tape right there.

Bolden’s receiving stats in the passing game are improving, and his ability to pick up blitzes is still the best among the Pats’ running backs.