The Patriots may have finally found a solid starting offensive line. 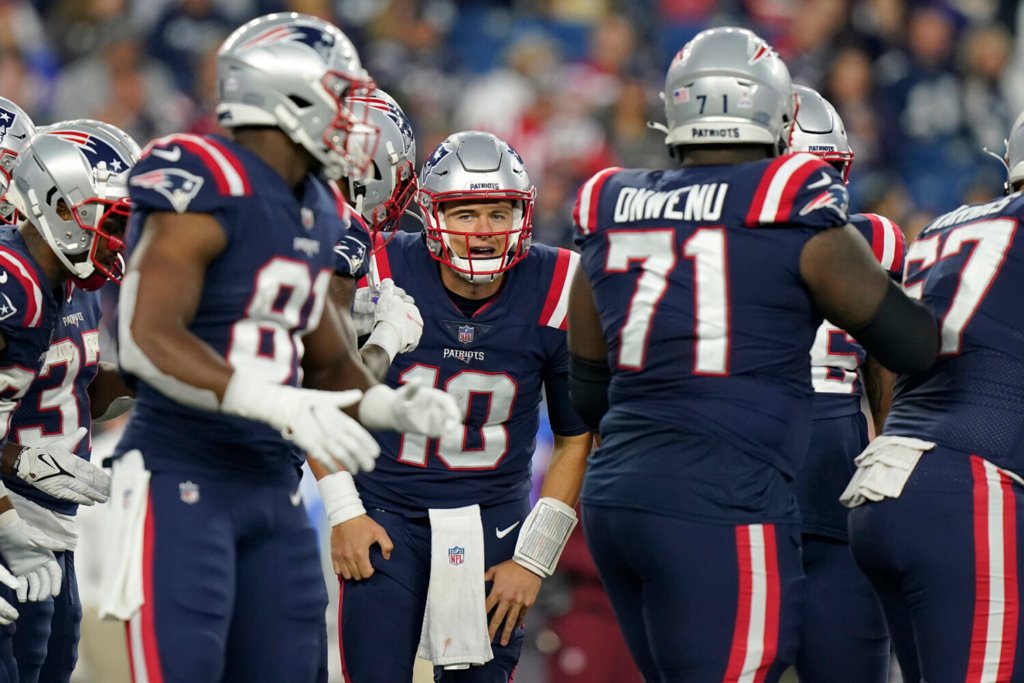 The Patriots’ offensive line came into Sunday’s game against the New York Jets with one major point of emphasis: be the more physical team and finish in the running game.

“As a group, I know that was something that was kind of challenged as they talked, and you can see it demonstrated on film,” offensive line coach Carmen Bricillo said.

New England wanted to dominate in the trenches, and they did, with a 56% rush success rate and all five starting offensive linemen grading out 75 or higher according to Pro Football Focus.

The Pats began imposing their will against the Jets by running fullback lead plays out of the shotgun, including the go-go formation above. On the left side, Isaiah Wynn (LT) and Ted Karras (LG) generate substantial movement at the point of attack while fullback Jakob Johnson leads through the hole to the second level, springing Damien Harris for a 12-yard gain.

New England went back to their lead play from the gun on the ensuing drive. This time, a lead draw call with Harris and Johnson flanking Mac in the backfield. The right side of the O-Line gets a turn now, with Mike Onwenu (RT) and Shaq Mason (RG) dominating at the point of attack to open a hole for a nine-yard gain.

Patriots offensive coordinator Josh McDaniels incorporated single-back draws, a well-executed toss with tight end Hunter Henry making a key block downfield, and one last lead play on the goal-line to punch it in (check out the combo block from left tackle Isaiah Wynn, who had his best game of the season vs. New York).

With the running game flexing its muscles, rookie quarterback Mac Jones was 12-of-16 for 11.1 yards per attempt off play-action, and the Pats also averaged 11 yards per play on screens.

Furthermore, the Pats’ starting O-Line only had 12 true pass sets in the win, which are straight drop-back plays where there’s no play-action or screens, essentially limiting one-on-one exposures in pass protection.

By setting the tone with their running game, the Patriots found a rhythm with a script that was the initial plan for this offense to produce points.

New England’s offensive line and two-tight end packages were built to run the ball effectively, something they didn’t do for the better part of their first seven games.

And by the way, the Patriots’ next opponent, the Los Angeles Chargers (4-2), are dead-last in DVOA against the run this season.

Although the 54-point outburst says plenty about the Jets defense, finding a sturdy offensive line that can pass protect (20.5% pressure rate) and run block was a must for New England.

We know what quarterback Mac Jones can do from clean pockets (90.8 PFF grade, ninth-best), and Damien Harris is more than capable of leading a potent rushing attack (third in PFF grade).

If the Patriots are finally settled on the Wynn (LT), Karras (LG), Andrews (C), Mason (RG), and Onwenu (RT) starting five, their offense as a whole will benefit from continuity upfront.

Now, let’s empty the film notebook from Week 7 before we turn the page to LA:

The biggest area of improvement for the Patriots’ defense this season is on first and second down. Last season, the Pats were 26th in yards (6.1) and 28th in EPA per play on early-downs. This season, they’re a full yard better (5.1, third-best) and 12th in EPA. And the most significant turnaround is against play-action, where the Pats went from 30th (9.4 yards per attempt) to third (6.1). By limiting yards on early downs, the Pats are giving themselves legit chances to get off the field on third down.

We saw that come to fruition on the Jets’ opening drive. In the first play, Lawrence Guy and Carl Davis reset the line of scrimmage into the backfield as two-gappers, allowing linebacker Ja’Whaun Bentley to shoot the A-gap to make the stop. Then, rookie Christian Barmore shoots inside while Kyle Van Noy sets the edge, allowing Bentley to make the play again. With the Jets only gaining three yards on their first two plays, it’s 3rd-and-7, putting New York in an obvious passing situation for the Pats to dial up a blitz (Myles Bryant from the slot). Three-and-out.

Although the early-down success is excellent, the next step for New England is to improve on third down, where they’re 20th in the league currently (41.7%). We’ll have more on that later.

Sticking with the domination on the line of scrimmage, Pats rookie Christian Barmore was highly disruptive by leading the team in QB pressures (four) and making an impact against the run.

As a run defender, Barmore’s athleticism showed up. In the first clip above, Lawrence Guy and Ja’Whaun Bentley force the runner to cut back inside, and Barmore chases him down from the backside, going from a backside five-technique all the way down the line. Then, Barmore makes a fourth-down stop by crossing the guards’ face at the snap to get into the backfield.

In the pass rush, Barmore is winning reps as a three-technique in the Pats’ stunt schemes. Here, Barmore wraps around inside penetration by Van Noy to force Zach Wilson into an incompletion.

Barmore’s current PFF grade (49.9) is tanked by reps of poor gap discipline against the run, which is an area for improvement. But the Pats need and will take the negative plays.

The Patriots’ third-year corner was better in this game, which the coverage metrics reflect (1-for-5, eight yards, three PBUs). There was one play early in his afternoon where it felt like he could’ve squeezed the corner route in cover-two a little more to help out Kyle Dugger. But his man coverage reps were solid. In the past, Williams’s struggles in man coverage come up when he’s not playing to his help and trying to go one-on-one with his man. New England’s coverage system has built-in help defenders in the middle of the field to make it less stressful on corners. Those who play to their help consistently find success in a man-heavy defense.

Here, Williams plays his divider rules perfectly in press-man. He has post-safety help over the top (Myles Bryant) and a low-hole defender to the inside (Van Noy), so Williams plays outside trail coverage on Denzel Mims. When Mims breaks out on the corner route, Williams smothers it and nearly comes up with the INT.

The key in man coverage is don’t too much. Have proper body positioning and good eye discipline while playing to your help. Williams did that there.

As we mentioned earlier, a typical strength for the Patriots on third down is becoming a weakness, with New England’s defense ranking 20th in third-down efficiency.

Although it hasn’t been a major issue, one clear issue against the Jets was pursuit angles and tackling on throws short of the sticks. This season, the Pats have allowed seven first downs on 23 third-down throws short of the sticks, which is above league-average. But it still feels like they need to be more aware of the sticks, situation, and rally to the ball. There are far too many close-calls (see third-and-25 versus Dallas) or plays against the Jets above.

For the first time this season, Patriots offensive coordinator Josh McDaniels was in his bag to get tight end Jonnu Smith rolling. Of course, Smith injured his shoulder and didn’t return. But the scheme wrinkles to get him involved were a huge step in the right direction.

One of those wrinkles was a TE screen into the short side of the field. The Pats motion to get the defense to bump over, then run play-action with Hunter Henry going across the formation to clear out the left sideline. The play-fake and Henry’s route force the Jets’ linebackers to retreat or “robot” technique upfield to cover the downfield routes, and Jonnu makes a defender miss with the ball in his hands to get going. Good design and usage of personnel.

6. Early Look-Ahead to the Chargers in Week 8

Old school versus new school in this matchup. If football twitter was a head coach in the NFL, it would be Chargers head coach Brandon Staley. Staley is an aggressive fourth-down decision-maker, ranks fifth in the NFL in passing frequency, and plays more two-high safety shells pre-snap than any defense in the league. He’s an analytical guy who is adjusting his approach to the modern game. So trendy. I’m fascinated to see which style of play wins out on Sunday.